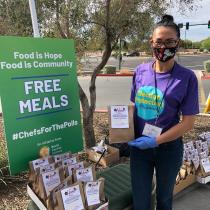 Several Valley chefs are partnering with a nonprofit to provide meals at polling places. The program not only feeds voters, it also nourishes local restaurants struggling during the pandemic.

“It’s a shrimp farm up in Gila Bend, it’s called Arizona Desert Shrimp and so here we go supporting a local, sustainable shrimp farm that's in our economy,” she said.

Leoni said World Central Kitchen awarded the Phoenix area nearly $120,000 to provide meals on Election Day and the four days leading up to it.

“These are all little places like me that are on the brink of losing, losing everything we have," she said. "And I am so grateful, it makes me teary eyed that I have the opportunity, you know, like to serve my community but in turn like give me the chance one more time to pay my rent one more time."

Leoni and her volunteers will hand out meals at eight polling sites on Election Day. A project spokesperson said 11 other local restaurants served more than 14,000 meals before Tuesday.

World Central Kitchen describes the effort as nonpartisan and a way to feed people of all political parties and beliefs, along with non-voters.

“You know you can be with a lot of people but still feel alone, it’s like a really weird  dichotomy,” Leoni said. “I want people to realize that they’re not alone and they are seen, I want them to feel recognized and thanked for this effort.”

Chefs For The Polls — Phoenix