Arizona Craft Beer Finds Its Way During The Pandemic

Download mp3 (6.52 MB)
Ron Dungan/KJZZ
Cans in storage in a refrigerated room at Huss Brewing. During the pandemic, the brewery had to shift their sales to cans.

Craft beer drinkers have an ear for the sound of their favorite beverages. The crack of a can opening at quitting time, for example, or Church Music. That's a hazy India Pale Ale brewed in Tempe.

Church Music one of the hundreds of beers brewed in Arizona, from Tombstone to Flagstaff. Craft beer is a billion-dollar business in Arizona.

That’s billion, with a B.

In two decades, it has grown from a handful of breweries to more than 100. 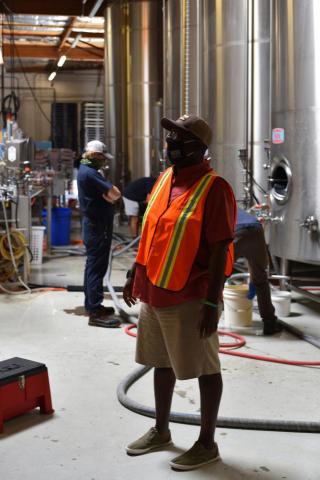 Eight months ago, you could usually find craft beer at your favorite local restaurant. Then coronavirus struck: Bars and restaurants closed, and when they did, keg beer stopped flowing.

Huss was founded about seven years ago. They’re now the third-largest brewer in the state. But when restaurants closed, they had to change their business model, almost overnight. That meant changing from kegs to cans. What they found was that people still wanted to drink locally. They just bought their beer at stores.

Huss tapped into loyalty for their product. It’s that loyalty that keeps craft beer going.

“Our beers are only available here in Arizona. So you know, we’re home team proud, and we have a big following of local fans that keep us going, you know especially in tough times like now," Mulala said.

Local breweries are small. Like most small businesses, there’s a seat-of-the pants mentality that comes with the territory. They like to try new recipes and new ingredients, like wild hops, coffee, vanilla or caramel. Some brew seasonal beers and one-offs.

COVID has added to that chaos.

“When you put regular organized chaos that we’re normally used to dealing with, and throw a global pandemic on top of it, it starts it gets a little unmanageable,” he said.

Huss was in a good position to make the transition from kegs to cans because they were already canning. But some brewers relied entirely on keg sales, said Dylan DeMiguel, a partner at The Shop Beer Company along with David Arnce and Jason Calhoon.

Ron Dungan/KJZZ
Grains used in the brewing process at The Shop Beer Company.

Shop Beer Company is located in Tempe, near the Salt River, not far from Sky Harbor Airport. In the summer, you can hear locusts outside the brewery, and passing jets can drown out conversation.

“So you know our best seller, the beer that we’re most known for is Church Music, it’s a 6.7% hazy IPA. And that one has really taken off for us. So that’s the lead dog," DeMiguel said.

“It’s a lot of fun, it’s lot of innovation. You know really the overarching thing in craft beer is the sense of community," DeMiguel said.

Ron Dungan/KJZZ
The production room at The Shop Beer Company in Tempe.

Last fall, virtually all of Shop Beer Company’s products were sold in kegs. They had hoped to get into cans, and were shopping around for a canning machine, expecting it to arrive in March, but it became available in November. They took it. When COVID struck, they had the machinery, but they still had to find customers. The canned market can be tough to break into.

"So we had to switch our whole business over to can sales, in a matter of days or weeks," DeMiguel said.

There were virtual meetings, phone calls and late nights. But local mom and pop beverage stores picked up their beer. The grocery stores and big retailers followed.

“I think we’re finding that our breweries have been pretty resilient. And they’ve also been fairly agile. A great many of them have had to switch their business model quite a bit during this pandemic and adjust to government regulations, and as a guild we’ve been sort of shepherding through that process," said Rob Fullmer of the Arizona Craft Beer Guild.

"I think as an industry that we’ve done very well in making sure that we’re able to sort of run that balance of being open for business and also being safe," Fullmer said.

Fullmer said that most breweries have been able to survive the pandemic, with few furloughs or layoffs. They’ve done it through federal paycheck protection plans and shifting business models. But most of all, they did it with local support.

It’s too soon to tell how things will shake out in the restaurant business. Local brewers are concerned about how their friends, and their communities, will make out.

But it looks as if local beer will survive.

Ron Dungan/KJZZ
Grains used in the brewing process at The Shop Beer Company.
Ron Dungan/KJZZ
Beer in storage in the back of Huss Brewing.
BusinessCoronavirus