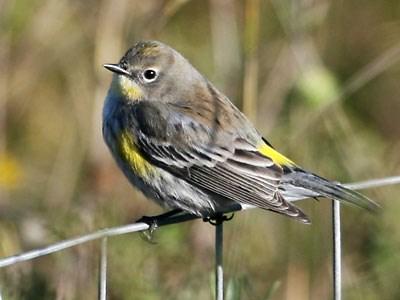 MARK BRODIE: The weather is officially inviting in Arizona, both to humans and to birds. Depending on where you are in the state, you may be hearing celebratory bird songs from desert dwellers like thrashers and wrens, or you may spot wintering hawks and winter varieties of hummingbirds and as their summer counterparts seek warmer locales. The Tucson Audubon Society suggests looking out for Lawrence's goldfinches and yellow-rumped warblers in October, sandhill cranes in November.

STEVE GOLDSTEIN: Our next guest fell in love with birding, thanks in no small part to the species found in Arizona's skies, years ago. And now she's made it her mission to share it with others who may have thought birding was out of their reach. Virginia Rose uses a wheelchair, and she started the Audubon Society's Birdability program to reach more people with disabilities and mobility challenges. The program has 18 captains in 13 states, including Arizona. But Rose says she still has to pinch herself when she thinks about her own humble beginnings in the field. Our co-host Lauren Gilger spoke with her more about it.

VIRGINIA ROSE: My little sister began birding in Tucson and she encouraged me to explore that as an option. And I was able to attend a lecture sponsored by Travis Audubon, which is the local Audubon Society. And that was all it took. And I just absolutely loved it. And I joined Travis Audubon and I took all their classes and I went on all their field trips. And the rest is history, so they say.

LAUREN GILGER: Yeah, yeah. What did it mean to you when you found this community? What, what drew you to it?

ROSE: I think there were a number of things that I didn't realize fully until later. But initially, I just loved having an opportunity to be outside and doing a hobby that A, I could do easily, that was so satisfying; not only not only satisfying in terms of being able to find the birds and identify the birds, but the community that came with it was just immediately wonderful. I mean, people who are like-minded and who are outdoorsy and who were conservationists and naturalists and people who accepted me immediately and took me with them wherever they went. Nobody ever said no. There were no hesitations about anywhere we went, and they encouraged me and supported me the whole time.

GILGER: So that must have felt really good, but were there challenges in birding for someone like you in a wheelchair or, or for other people with different mobility challenges, for that matter?

ROSE: Absolutely. I have to say, I was the only person who had a mobility challenge in Travis Audubon. But the difficulties were mainly things like slope, there were some too steep for me to manage or surface areas like gravel or sand or rutted roads and rocks and just things that made going along a little difficult. Things like gates, cattle guards, things like a number of things. But I think that that also served to empower me, because, as I say in my presentations, when I come home from a birding field trip, I don't just come home with a list of birds. I come home feeling empowered. And it's because I've been able to figure out how to do all these things.

GILGER: Yeah, that's amazing. So how did you sort of first start to work on this effort to reach more people like you and get them into birding?

ROSE: Exactly 30 months ago, I decided to conduct my own bird-a-thon. And in that bird-a-thon, I would visit five accessible parks and I would bird from dawn to dusk. And I would see as many birds as I could. And I wanted to go independently. I did not want anyone to join me because I wanted to make the point that these parks should be accessible for anyone with mobility challenges to go independently or the word I like to use is unattended. It's important to be able to experience nature alone. And once I did that, then the rest was history. National Audubon found out about that trip, found out about that event, and sent a photojournalist down to follow me. And then it took off.

GILGER: And it's evolved now, right? Like this includes people not just with mobility challenges, but with other disabilities as well.

GILGER: So what are you doing now with the Audubon Society, with Birdability to, to help parks, to help other birding locations become more accessible and open up so that people can, can enjoy them?

ROSE: Well, you just wouldn't believe what happened in the last 30 months. National Audubon was able to put together what we were calling a Birdability map. And it was my dream to have a map whereby we had all of these accessible parks pinned on a map so that anybody, anywhere could see which parks in their area were accessible. And so National Audubon designed that map, and they did it in record time — like within five or six months. That map launched in March. And it's just gone crazy. We have sites pinned in Alaska and Canada and even one, I think, in Costa Rica. So it's becoming an international thing.

GILGER: That's amazing. OK, so before we let you go, we have to ask you a couple of birding questions — just for those of us who are not in this world and, and don't know that much about it. So we're here in Arizona. I know you spent a lot of time here. You have a sister here, like you said. So what's your favorite birding spot here in Arizona? Like, where should we go if we want to start this?

ROSE: I would say, far and away, Sweetwater Wetlands. And that is a — that's in Tucson. I have to give a shout-out to the Proctor Trail, which is in Madera. And that is, that is a wonderful sort of more backcountry kind of experience for birding. And it's a little difficult to manage. But I know that that trail was recently improved and I can't wait to get on it.

GILGER: All right. That is Virginia Rose, the founder of Birdability for the Audubon Society. Virginia, thank you so much for coming on The Show to tell us about this.

ROSE: Thanks so much.