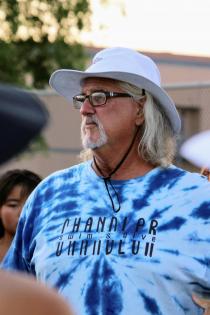 The resolution proposes naming Chander High’s aquatic center after Croswhite, where he had taught and coached at since 2002. It’s an appropriate tribute for a man who touched the lives of so many students and people in the community, said Chandler Assistant Principal and Athletic Director Jim Culver.

“Kerry was one of those coaches that immediately connected with kids, and it wasn’t necessarily about wins and losses, I mean, although Kerry was a super successful coach,” Culver said. “Kids were able to understand Kerry, and he was able to understand them.”

In addition to coaching, Culver said Croswhite was an assistant varsity softball coach and worked many sporting events throughout the year such as manning the scores table during the basketball season.

Croswhite also known for playing the bagpipes. Years ago, Croswhite used to lead the school’s football team out in the field with his bagpipes, Culver said. Croswhite would also play during school assemblies dressed in a kilt. Culver said he was a huge hit with students. Overall, Culver said Croswhite was a caring individual who was always looking out for others and had a great sense of humor.

"Even when people were having a bad days, Kerry always had that personality that could make people feel better about themselves and make people laugh," Culver said.

Croswhite’s absence is felt throughout the school, Culver said.

“Kids miss him and faculty miss him,” he said. “There’s not a day that goes by, I don’t think that we don’t think about him.”

The meeting will start at 7 p.m. on Wednesday and can be viewed virtually.