If This Year’s Arizona Ballot Initiatives Pass, How Soon Do They Take Effect? 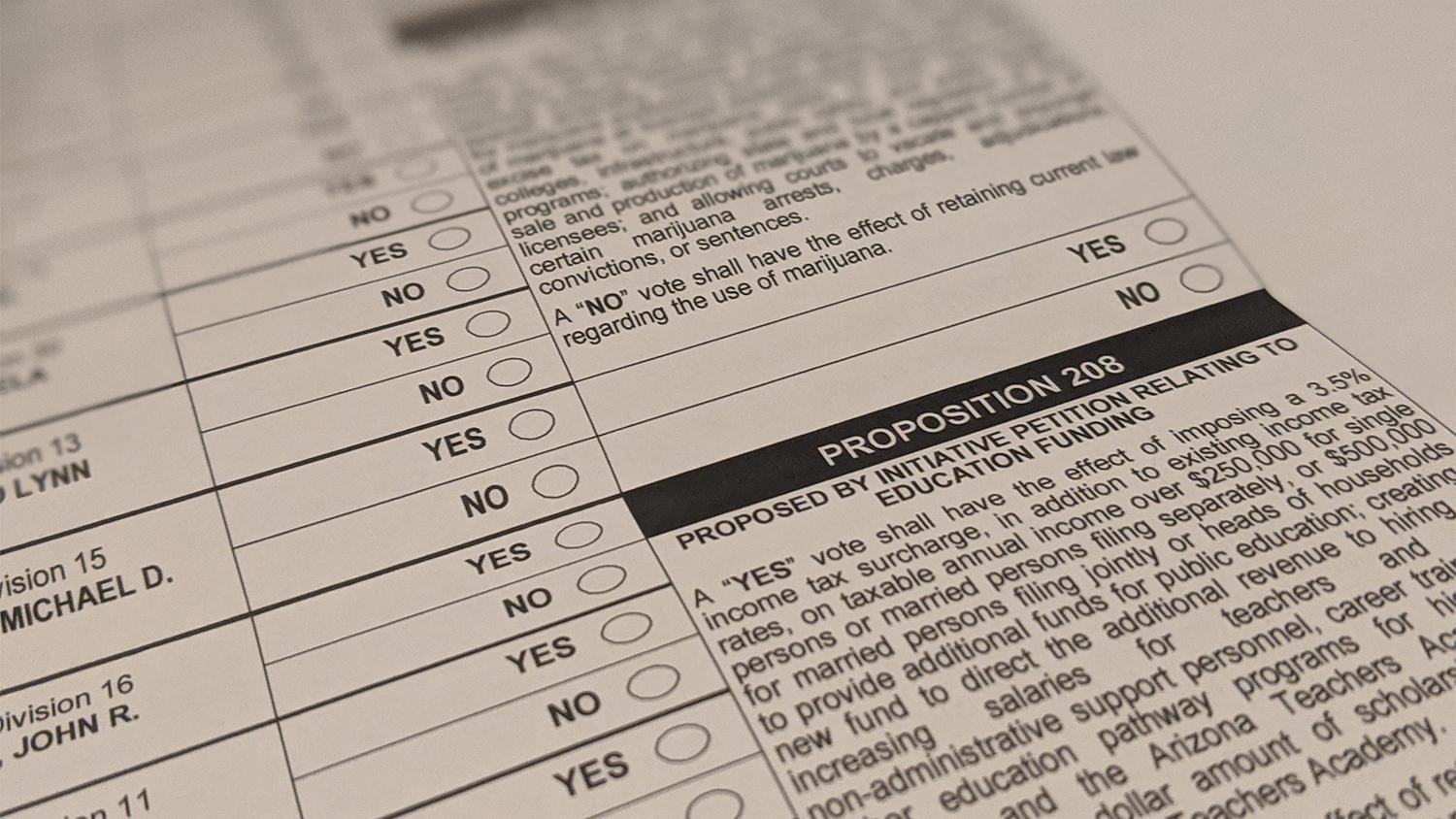 Arizonans will vote on two ballot initiatives in the 2020 election: one to legalize recreational marijuana, and one to impose a tax surcharge on high earners to boost education funding.

If a majority of voters vote to pass these initiatives, they will become law in Arizona. But they won’t take effect immediately: Arizonans won’t be able to buy recreational marijuana for at least a month, and schools might have to wait more than 6 months to see Proposition 208 money.

Each of these initiatives requires state agencies to change their policies and implement new regulations — a process that often moves slowly.

How A Proposition Becomes A Law

If voters approve a ballot initiative or referendum, the Arizona Constitution says it takes effect once all the votes have been counted and certified. The governor then issues a proclamation, and the ballot measure officially has the force of law.

“There’s a statute that specifically indicates that after a final canvass indicating that a majority of voters have in fact passed an initiative, they will go into effect immediately,” said Roopali Desai, an election lawyer and partner at the law firm Coppersmith Brockelman. She helped draft both Proposition 207 and 208. “There’s no delayed effective date as a default. Once there’s the official canvass and the governor’s proclamation, they will be effective.”

Neither of the 2020 propositions have delayed effective dates, so they’ll officially become laws as soon as the canvass is certified. But that doesn’t mean the administrative and regulatory rules established by those laws will take effect immediately.

“The governor doesn’t have any independent authority to not endorse the canvass, and so I don’t think there’s any opportunity for him to not issue a proclamation with respect to these initiatives if they pass,” Desai said. “The State Legislature can amend a law and refer it to the voters, which would basically be a re-vote or another vote on amendments or changes to the law that the voters passed in the first instance.”

When Would Marijuana Become Legal?

If Proposition 207 passes, recreational marijuana would technically be legal as soon as the final vote is certified. In practice, though, it would likely be a few months before Arizonans could legally possess marijuana.

“There needs to be a licensed retail dispensary, so currently in Arizona we have medical marijuana dispensaries, but you can only purchase there if you have a medical card,” Desai said. “Until the Department of Health Services rolls out the program, which includes licensing dispensaries, there’s no place that you can legally buy it.”

Proposition 207 requires the Arizona Department of Health Services to begin licensing recreational dispensaries as early as January 2021, and Desai said those licenses could be approved within a month.

“By February, I expect that there will be licenses given by DHS to places that will then be able to open up their stores,” Desai said. “I think it will be fairly quickly that people will be able to actually walk into a dispensary and be able to buy from a licensed retail provider. I would say definitely in the first quarter of 2021, but maybe as early as the first month.”

When Arizona voters approved medical marijuana in 2010, the Department of Health Services delayed implementing the program, leading to litigation. DHS was eventually ordered to comply with the law and begin issuing medical dispensary licenses.

Desai said Proposition 207 is written to prevent that from happening again. If the state government drags its feet, the state’s existing medical marijuana infrastructure would automatically open up to all adults.

“The language itself accounts for the possibility. It says that if DHS doesn’t do what it’s supposed to do, then the medical marijuana rules and licensing will by default go into effect on this sort of ‘poison pill’ date,” Desai said.

That means the state has until April 5th to issue licenses for recreational dispensaries, and if they don’t, then medical dispensaries are allowed to sell to any legal adult.

When Would Schools Start Seeing Money?

If Proposition 208 passes, it too would go into effect immediately upon the final canvass of votes. But voters would likely not see any immediate effects from the law. The first round of distribution to the Invest In Education fund doesn’t happen until June — and there might not even be any money in the fund by then.

The earliest that high-income taxpayers might see the surcharge is in April, when many taxpayers file their first quarterly returns - but that’s not a guarantee, Desai said.

“It’s tricky because Prop. 208 funds that go into the classroom are based entirely on income tax revenue,” Desai said. “It’ll be interesting to see if the (Department of Revenue) says they can’t really know what the surcharge on all taxable income is in one quarterly income tax payment, because you really have to file a whole annual income tax report to decide what 3.5% above $250,000 is.”

That means it’s possible that schools might not see any Proposition 208 money the first year.

Invest In Education spokesperson Dawn Penich-Thacker acknowledged that, unlike some other recent ballot initiatives, Proposition 208 might not have immediately tangible results.

“It’s not like a minimum wage law, where we’re going to start to numerically and objectively feel the difference,” she said. “But I think individual families will feel the difference, and hopefully school administrators will report on how many people they hired or how few people quit.”