Q&AZ: How Did Arizona's Kitty Joe Creek Get Its Name? 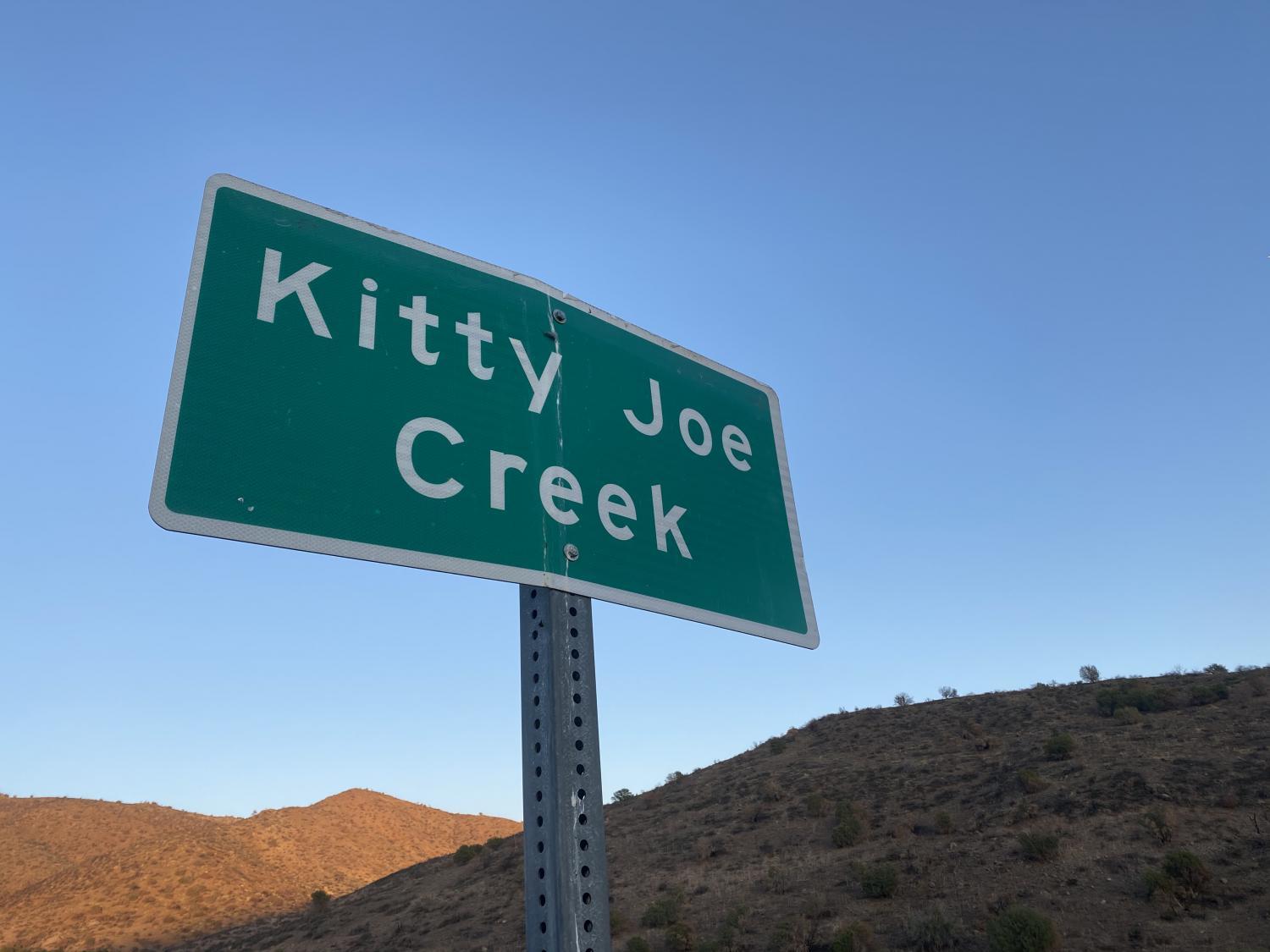 Last year, a listener question led me on a journey to Holbrook to dig up the history of a street with an eerie name. The hunt brought up other Arizona places with menacing monikers.

Now, another listener has asked us how Kitty Joe Creek came to be. So, I took another trip down the rabbit hole of Arizona place names.

Driving along the Beeline Highway toward Payson, you’ll see two small signs for Kitty Joe Creek. But Arizona historian Marshall Trimble said a passersby would’ve never known about the landmark were it not for a change in the highway’s route about 20 years ago.

“When that new highway was built, they had to put the names on [signs],” Trimble said. “These surveyors, what they do is, they just ask somebody, ‘Well. what do you call this,’ and ‘What do you call that?’”

Most likely, a local dubbed it Kitty Joe Creek and passed it onto the surveyors.

“And there’s also Kitty Joe Spring and the Kitty Joe Mine and Kitty Joe Canyon all up in there, but you won’t see signs for those because they’re off the highway,” Trimble said.

So, who was Kitty Joe?

“He was a prospector and a miner who had a cabin near the creek that bears his name,” Trimble said. “He was one of the infamous old-timers who lived on the mountainside from the late-1800s through the 1930s or so.”

Back then, the closest thing to Kitty Joe was a mixed-use gas station, bar, and outhouse in Sunflower, which burned down a few years ago.

“Not much else is known about him,” Trimble said. “No picture is known to exist.”

But Trimble knows quite a bit about other oddly named spots in Arizona.

“We’ve got names like Total Wreck, Wrong Mountain, No Name Mesa, Mistake Peak, Nothing and Damfino,” he said.

Yep. Damfino. Can you guess how that name came to be?

“One of the surveyors hollered out to another surveyor and he said ‘do you know what this is called?’ And he yelled back ‘Damn if I know’ and the guy wrote down D-A-M-F-I-N-O and to this day it’s known as Damfino.” Trimble said.

Last year, I sat down with Bob Boze Bell, the executive editor of True West magazine. We were talking about some of Arizona’s quirky names and he told me how the area known as Why got its name.

“There was a Y in the road coming from Ajo to the Mexican border, and they handed in their name as ‘Y,’” Bell said. “And the post office said ‘no you have to have at least three letters.’ So, they sent back the answer, ‘Why?’ So, the court picks that up and puts it in. I mean you can’t make this stuff up.”

One names that came up during my both conversations with Trimble and Bell was a little place called Nothing. 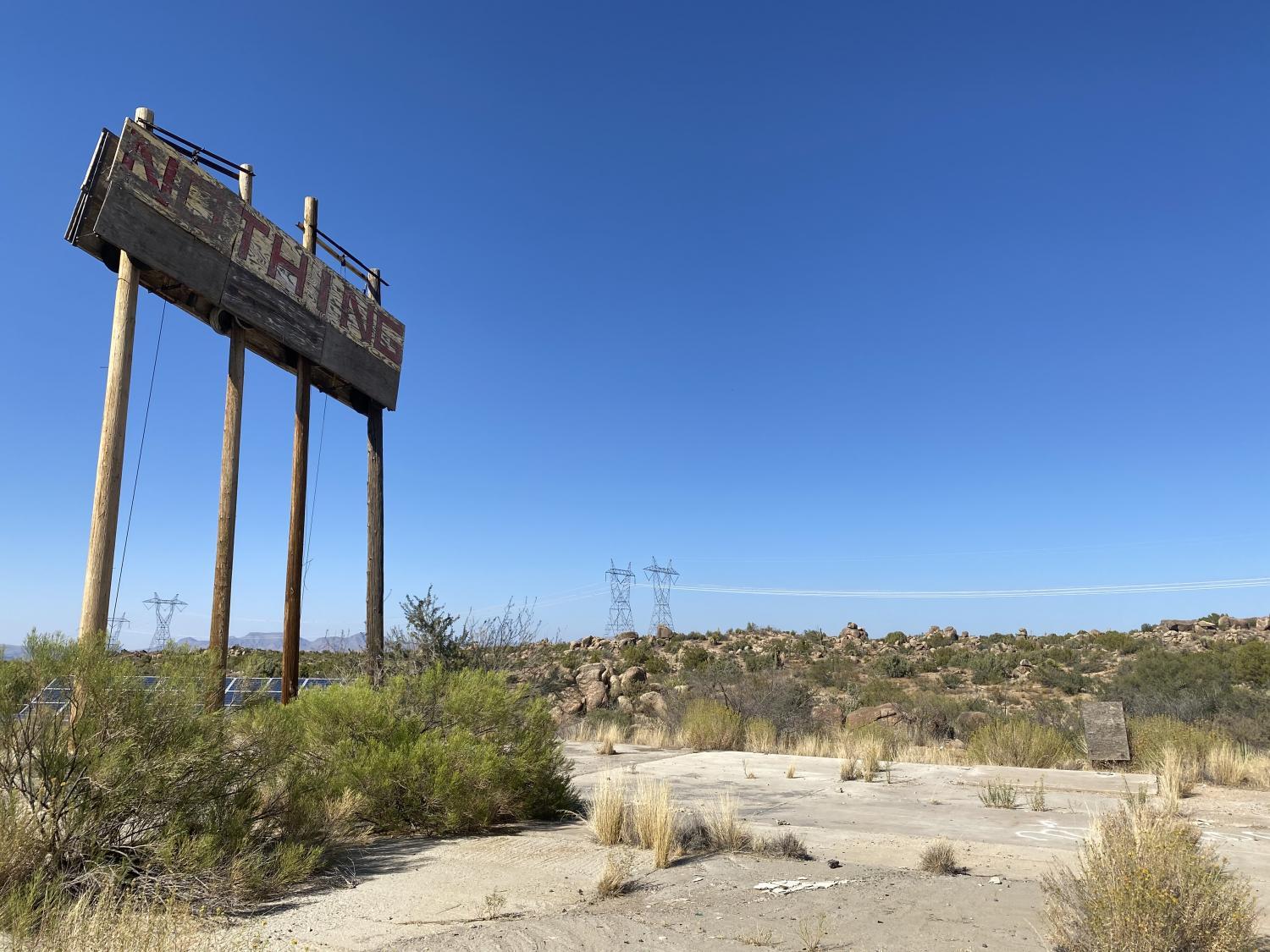 Dusti Bowling is an Arizona native and children's book author. She’s spent a lot of time in the lesser known corners of the state and bases all her kids books on places in Arizona.

“Anybody who has gone to Las Vegas is going to drive right by Nothing,” Bowling said. “I’ve stopped there and taken a picture underneath the Nothing sign. The name is for real. There’s nothing there. It’s just surrounded by desert. It almost feels like it was a joke at one point.”

In its heyday, if you can call it that, Nothing topped out at a population of four, and there wasn’t much to see but a gas station and a small convenience store. Founded in 1977, the little town showcased a sign that said: “The staunch citizens of Nothing are full of Hope, Faith, and Believe in the work ethic. Thru-the-years-these dedicated people had faith in Nothing, hoped for Nothing, worked at Nothing, for Nothing.”

“The guy that owned the saloon, which was called 'The Aint Much,' he was the mayor of the town,” Trimble said. “The people who came in were just the drifters living out in the hills, cowboys and ranchers and such.”

Over time, the place was abandoned and partially burned down. Trimble drove past it and took pictures over the years, but in the early 2000s, he noticed something different. 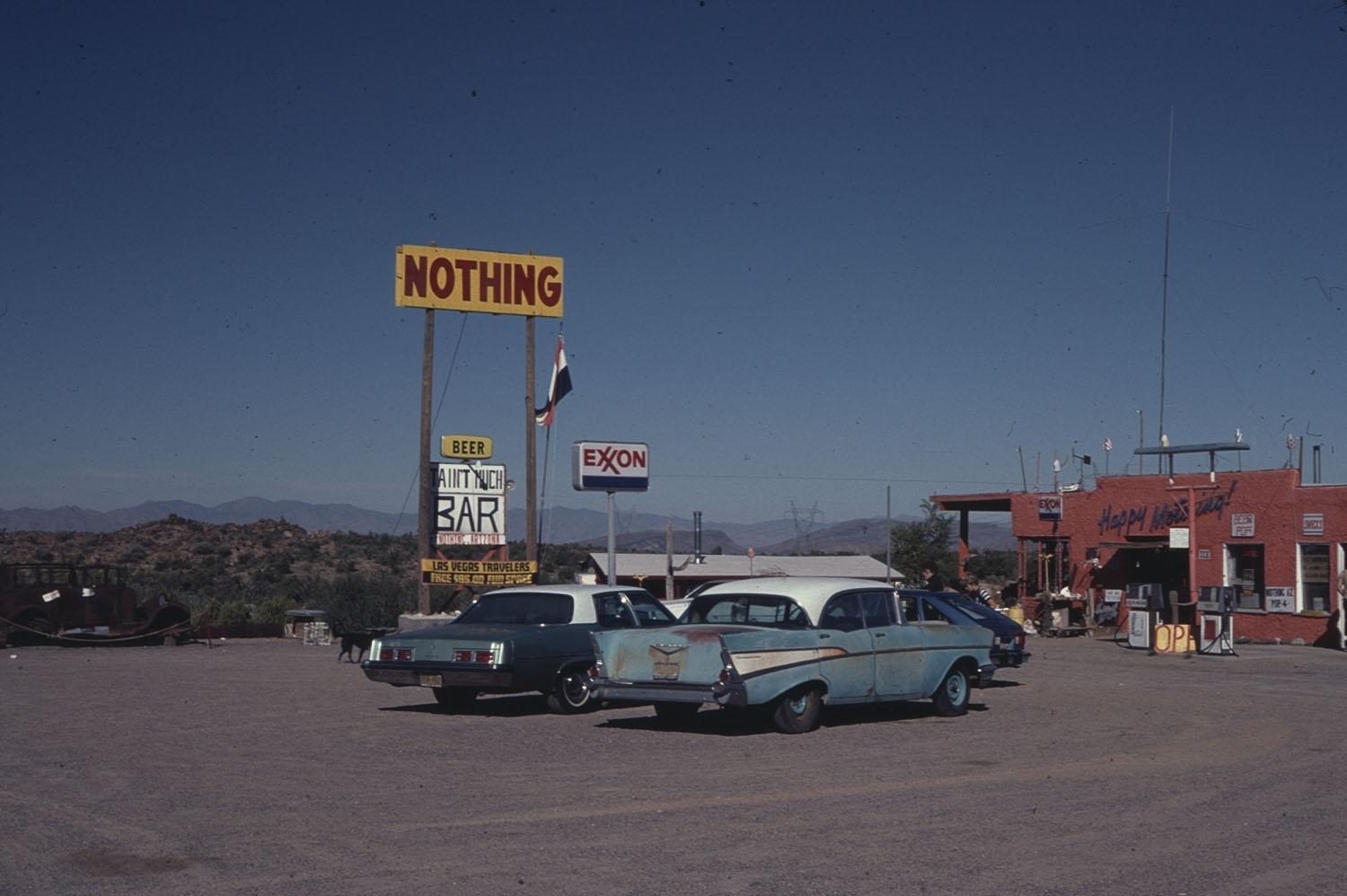 “The bar was gone, but the sign was still there, and they were selling pizza,” Trimble said.

Pizza — in the middle of nowhere. A new owner was attempting to revive the place by selling slices made in a portable oven.

“And I thought who sold this guy on an idea of opening up a pizza stand that respectively couldn't even be called a parlor,” Trimble said.

The new establishment didn’t last long, and the tourist stop slowly crumbled back into the desert.

Bell says he used to drive through the area all the time as a kid and was sad to see it bite the dust.

“It’s really shocking how quickly nature reclaims something when people leave,” Bell said. “We think that there’s gonna be all these structures we’ve built and all these signs and boy, it just really fades quickly back into — nothing.” 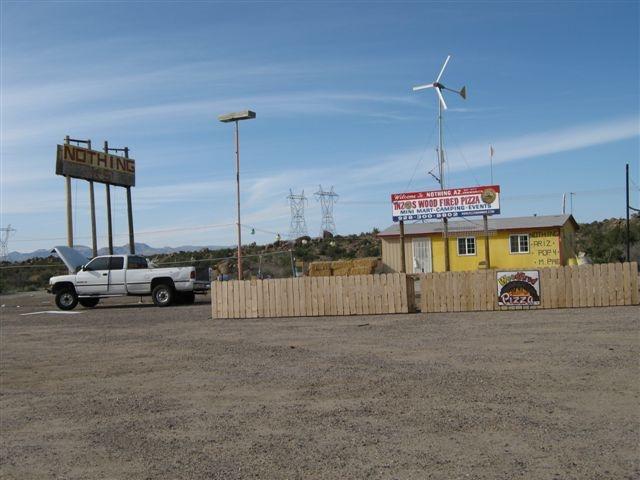 Marshall Trimble
Arizona historian Marshall Trimble took this photo of Nothing in 2010. A new owner had tried to revive the place by selling pizza from a portable oven. 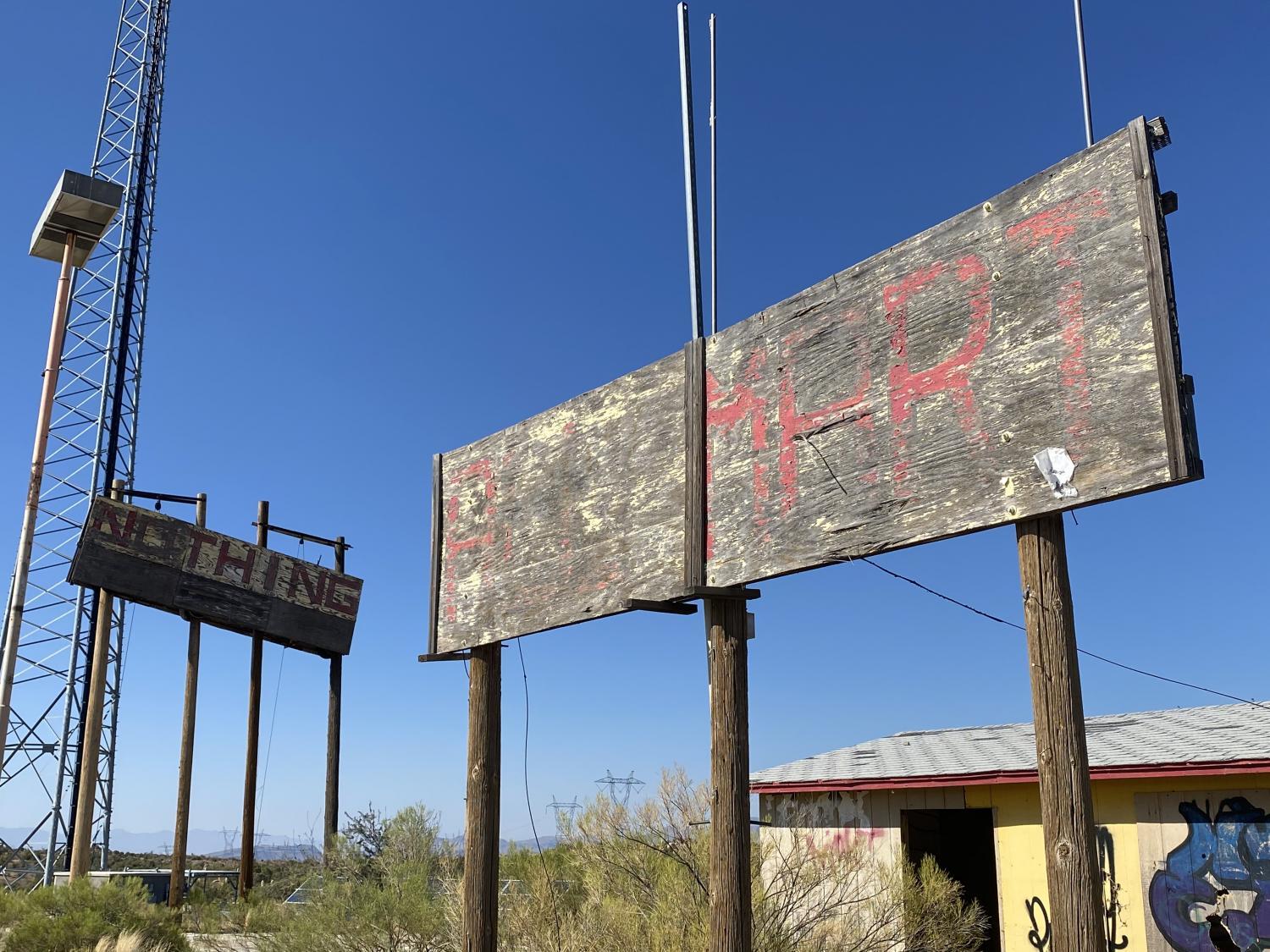 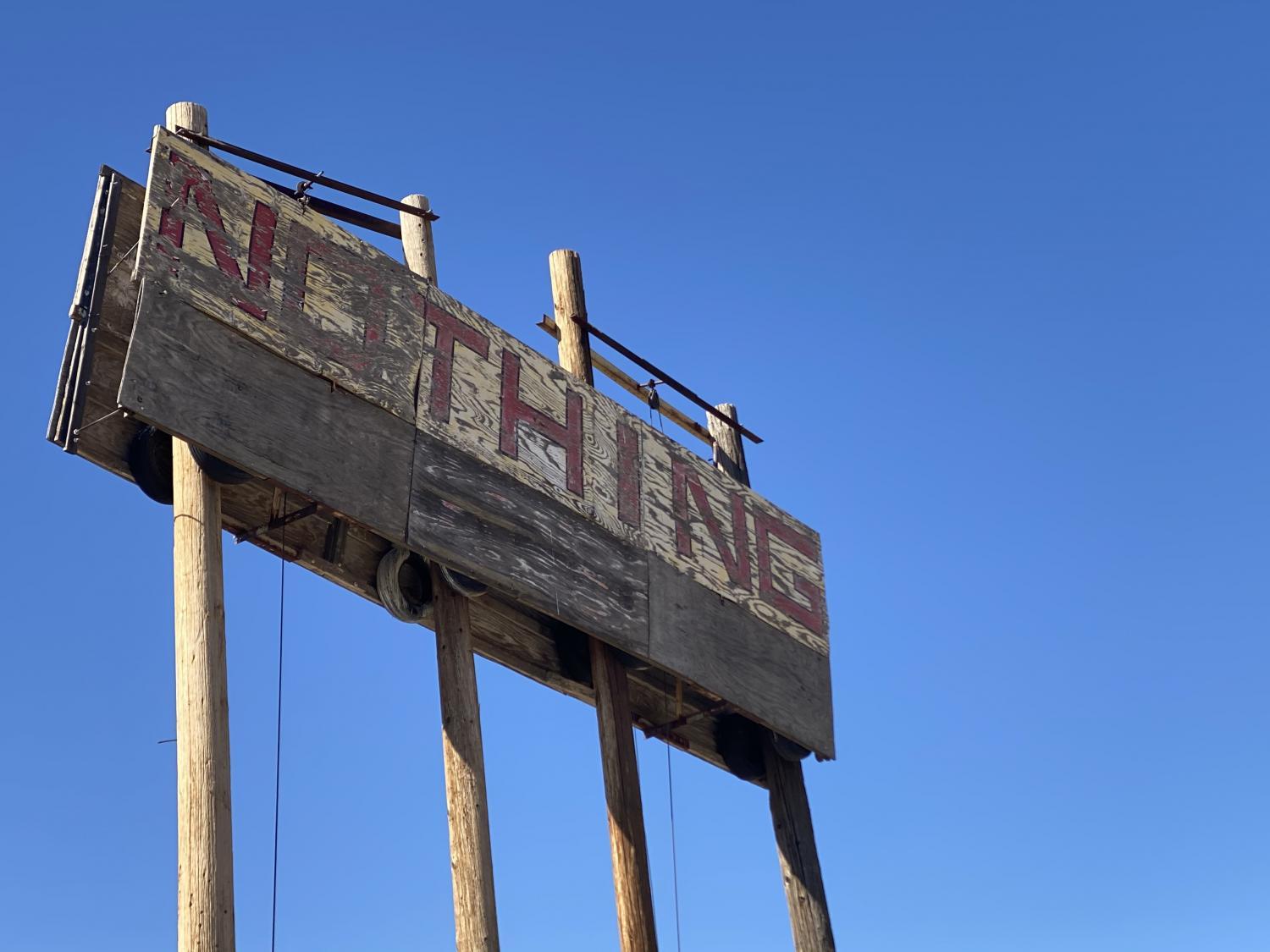 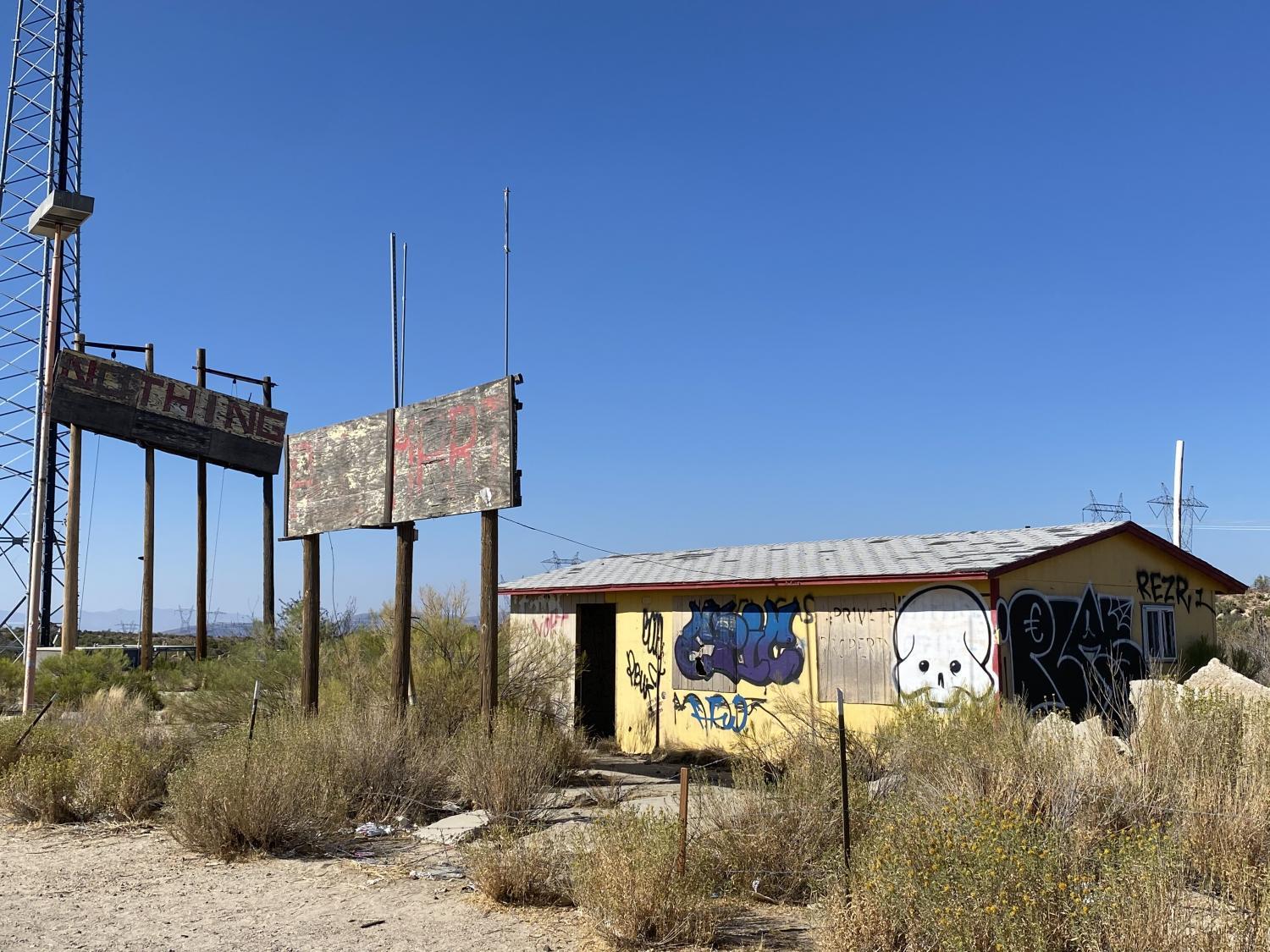