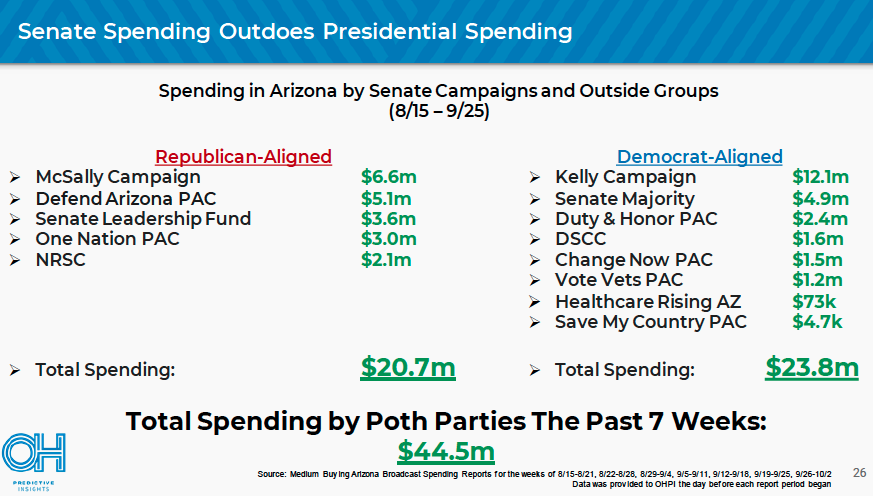 OH Predictive Insights
Both Senate campaigns and outside groups have been pouring money into broadcast advertising across Arizona since early August.

The months leading up to a presidential election are always full of campaign advertisements on television and radio, but 2020 is breaking records.

“This is hands down the most money ever spent on the presidential contest for broadcast in the history of Arizona,” said Mike Noble, chief of research and managing partner of OH Predictive Insights, a Phoenix market research company.

President Donald Trump's campaign has spent in $3.8 million in Arizona, compared to $14.4 million from Democratic candidate Joe Biden over the same time period.

Outside political action committees have chipped in the remainder of that total for their candidates, with Republican-aligned groups contributing significantly more than Democratic-aligned organizations.

“What that tells us is that when it comes to financial health, the Biden campaign is in a bit of a better position,” Noble said.

He pointed to nationwide fundraising totals for both campaigns as evidence. The Biden campaign saw a sharp uptick in donations in August, raising $212 million to the Trump campaign's $62 million that month.

Arizona has awarded its electoral votes to a Democratic presidential candidate just one time since 1948: President Bill Clinton in 1996. However, Noble said demographic shifts have turned Arizona into a coveted battleground state that could swing the election, which explains the huge influx of ads.

However, the presidential campaign spending pales in comparison to the Arizona Senate race, which has seen $21 million in campaign ads for Republican Sen. Martha McSally compared to $24 million spent to support her Democratic opponent Mark Kelly.

Of course, more spending on television and radio ads doesn't guarantee election victory, but Noble said it absolutely plays a role in public perceptions of a candidate.

"Think about that repetition," Noble said. "It makes an impact. In my experience, nothing moves the needle in polling, or where one’s position is in the race, more than broadcast spending. It is still king of what is the biggest thing to move a race from losing to toss-up to winning." 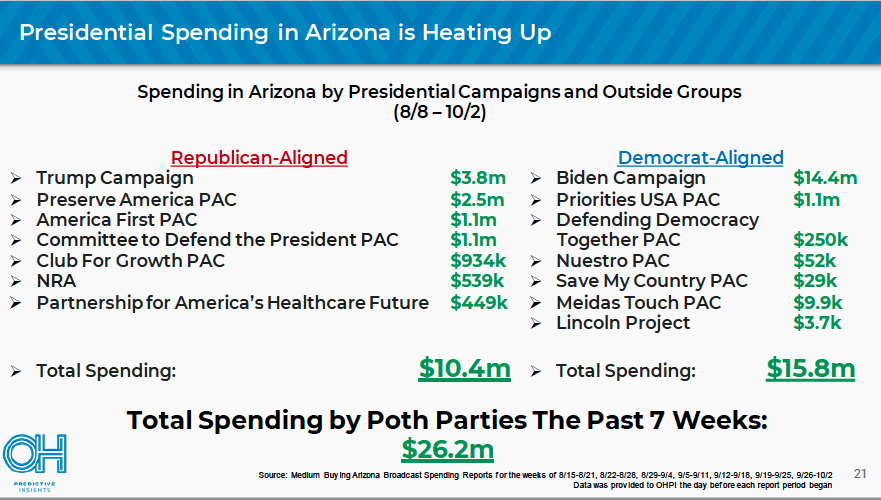