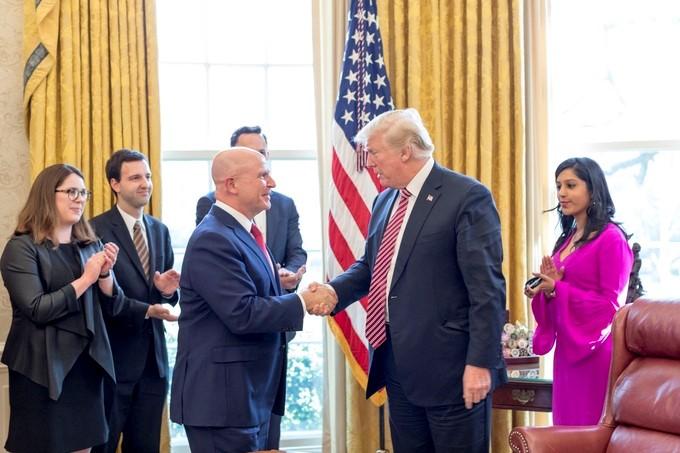 STEVE GOLDSTEIN: U.S. foreign policy has undergone dramatic shifts during the Trump administration, especially when it comes to the president himself saying positive things about adversaries like Russia and North Korea while being more critical of allies like France and Germany. So what's behind that sort of strategy, and does it make sense heading into the future and a possible Biden administration? In his new book, "Battlegrounds: The Fight to Defend the Free World," former National Security Adviser H.R. McMaster addresses the approach he believes the U.S. should take whether a Republican or a Democrat is in the White House. [Oct. 6], McMaster will be taking part in a virtual conversation as part of ASU's School of Civic and Economic Thought and Leadership. I spoke to them earlier and started by asking what impact President Trump's COVID diagnosis and subsequent hospitalization could have on how U.S. adversaries view the state of our nation.

H.R. MCMASTER: Well, Steve, it could, it could have a significant impact, but I think that our adversaries or rivals, those who might want to try to take advantage of this situation, know that there's a process in place to serve the president, you know, even when he's ill or should responsibility, decision making, go to the vice president for a brief period of time for his treatment, those policies and, and standards — standard procedures are in place. But I think that what COVID-19 has done overall, despite the, in addition to the president getting ill, has catalyzed a lot of critical competitions that were already underway. And I think we've seen this in particular with how aggressive the Chinese Communist Party has become.

GOLDSTEIN: Well, how frustrated are you seeing this, now somewhat from afar? Just the way that the overall pandemic has been handled? There are a lot of people who are just saying, well, if we'd actually approached this as the way the U.S. has a lot of other challenges in the past, not that it would be defeated now, but we'd be in much better shape.

HarperCollins Publisher
"Battlegrounds: The Fight to Defend the Free World" by H.R. McMaster.
MCMASTER: OK, Steve. There are three keys to a, to a pandemic response, and there were plans in place, but, of course, what we know is that a plan is no good if it's not executed effectively. Now, the first, the first principle on pandemic response is to prevent it from becoming a pandemic and detect it early and contain it at its origins. Well, thanks to the Chinese Communist Party, we couldn't do that. The second aspect is to mobilize a biomedical response. And this is where we saw a lot of breakdowns and, and frailties — frailties that actually developed over many years associated with very fragile supply chains, that many of which were over-reliant on China. This is why we didn't have, you know, we couldn't get PPE fast enough — we let the stockpiles go down too far and so forth. And then the third aspect of a pandemic response is to innovate medical therapies, but especially a vaccine. I think in retrospect, that's going to be seen as a plus. So I think, I mean, two, two areas that need vast improvement is the, is the mobilization of biomedical response and, and stopping it early. But one that, the medical innovation aspect of this will be seen as a success. I would also add that, you know, we have to just announce, we have a federal system, we have a combination of public and private systems. And the biggest breakdown initially was coordination and integration of efforts across the federal government, between the federal government and state and local governments, and between the public and private sectors.

GOLDSTEIN: You mentioned Chinese Communist Party a couple of times in the first two answers. Is China our most troublesome rival at this point, considering the power and influence and reach and the fact of their philosophies are so starkly different from ours?

MCMASTER: Yes. And the reason is, I think we all know now that the assumptions on which we based the China policy for many years until 2017 was based on this idea that China having been welcomed into the international order, would, would liberalize — would play by the rules, would liberalize its economic system, and then ultimately liberalize its form of government. Well it's clear now that the party under Xi Jinping is doing the opposite of that. It is extending and tightening its exclusive grip on power internally and becoming more and more aggressive at exporting its authoritarian, mercantilist model in a way that, that challenges our security and prosperity for future generations.

GOLDSTEIN: Seems like ancient history now with the first Gulf War, when President [George] Bush at the time got credit for bringing allies together. And that's been missing to a lot of people in the three-and-a-half-plus-years of the Trump administration. So how much of it is more of the country coming together in and of itself, and then also giving our allies confidence that we have their backs to some extent and hope they'll have ours as well?

MCMASTER: We have to work together on these common challenges, and to take advantage of opportunities together. I think there's a lot more international cooperation than meets the eye. You know, I know that there is this impression that the Trump administration is going alone. I mean, you know, of course, the America First slogan and so forth. But I think that the, the increasing threats that we've seen from revisionist powers — Russia and China — has galvanized a great deal of international cooperation. You see the free world coming together to defend international institutions, right? China's doing its best to subvert the, these organizations like the World Health Organization. But we're working together I think much better than we have in the past on China's economic aggression. And you've seen just most recently with this poisoning of [Alexei] Navalny, there's a recognition now in Europe that, that Russia is going to remain a threat as long as Russia's under the control of Vladimir Putin. So I'm, I'm, I'm hoping, Steve, that, you know, whoever is sworn in on Jan. 20th does, as you're suggest — you're suggesting and just doubles down on international cooperation to overcome these challenges.

GOLDSTEIN: If there is a new administration in January, to whatever extent would there be what I'm going to call whiplash when it comes to U.S. foreign policy? Because it seemed like from the outside, at least, post-World War Two through the Obama administration, it seemed to most, didn't veer off that much. And then in the Trump administration seemed to take a dramatic shift. First of all, is that accurate in your telling? And would you see something dramatically different with a Biden administration?

GOLDSTEIN: Well, this fits into what you were saying before about can there be more of a civil discussion, can there be disagreement, but at least trying to find common ground? It sure doesn't seem like there's a lot of hope for that right now. H.R., why should we be optimistic that that might be able to happen?

MCMASTER: Well, I think a way to approach it, Steve, is to take this recommendation, I think, of strategic empathy, and stop succumbing to it by describing battlegrounds as strategic narcissism — this tendency to define the world only in relation to us and to thereby undervalue the degree to which others have authorship over the future. We can find a basis for the common action if we're a sensible foreign policy. If we define our foreign policy based on our partisan politics, I mean, that's just a recipe for disaster.

GOLDSTEIN: And that is H.R. McMaster, former national security adviser in the Trump administration. Also author of the book "Battlegrounds: The Fight to Defend the Free World." He'll be appearing virtually [Oct. 6] at 5 p.m. as part of ASU's School of Civic and Economic Thought and Leadership. He'll also be in virtual conversation with ASU President Michael Crow [Oct. 7] as part of the McCain Institute. H.R., thanks for the time today.

MCMASTER: Steve, it's been a real pleasure. Thank you so much.

EDITOR'S NOTE: The story has been updated to correct the name of ASU's School of Civic and Economic Thought and Leadership.