Four years ago, Paul Penzone unseated Joe Arpaio, who had been sheriff of Maricopa County for 24 years. Now Penzone is facing re-election against Arpaio’s Chief Deputy Jerry Sheridan. The race could shape the future of one of the largest law enforcement agencies in the country.

Arpaio tried to get his old job back but he was knocked out of the race in the primary. Nevertheless, Sheriff Penzone says Arpaio’s administration is still on the ballot in the form of Sheridan.

“I think this election is about putting to rest the past — making the strong statement that we are not going backwards," Penzone said. "That where we are and where we are headed is the future for our community.”

One of the largest challenges Penzone has faced is the lingering legacy of Arpaio’s unconstitutional law enforcement practices. The class action lawsuit Melendres vs. Arpaio was filed in 2007, challenging the MCSO’s pattern of discriminating against Latinos during unlawful traffic stops.

“The federal district court here in Phoenix found that indeed the MCSO’s practices the equal protection clause and violated the 4th Amendment of Latino motorists in Maricopa County,” said Victoria Lopez, advocacy and legal director at the ACLU of Arizona. She says MCSO has had to implement new policies and training, conduct community meetings with stakeholders, and there’s a federal monitor that oversees the whole process.

“And what we’re seeing now is unfortunately not the level of progress that one would anticipate, given the nature of the constitutional violations at issue here and the amount of time and resources that the MCSO has put into this case,” Lopez said.

Penzone called his efforts on the case "a balancing act."

"It is a negotiation and it is hard work,” he said. Penzone acknowledges the lawsuit is fully his burden now, but says his department has made great strides in changing the culture. "We need to continue to stabilize the law enforcement profession," he said. "And moving forward what I want to do is build a strong bond with our community that there’s never a question of trust.” 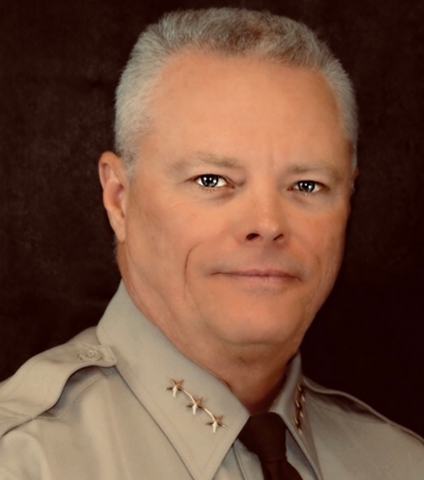 While Penzone is angling to be the candidate who will continue down that path of reform, his opponent Sheridan is calling for a return to more hard-nosed law enforcement.

Speaking to a group of supporters rallying at the statehouse last month, Sheridan fired up the crowd with a law and order stump speech much like that of President Trump.

“It’s all about taking care of you, the citizens the business owners, the property owners, the government buildings," Sheridan said of his candidacy. "Millions of dollars have been destroyed. I don’t have to tell you what’s happened in Phoenix, Scottsdale and Tempe."

Sheridan is running heavily on his experience. He worked at the Sheriff’s Office for 38 years. He claims Penzone’s tactics have hurt morale among the officers and civilian employees. Sheridan says the way forward is show more support for law enforcement, and to take a harder line on protesters.

“People have a right to peaceably assemble," Sheridan said. "But the second somebody throws a rock or a bottle or injures someone assaults one of our officers, that’s not constitutional any longer — that’s a crime.”

Sheridan said unlike other police officials around the country, he would not be marching or kneeling with Black Lives Matter protesters. In fact, he promised to have a line of jail buses waiting to arrest protestors who disobeyed his orders. Sheridan said it’s time to flex the power and autonomy that comes with the job.

"The sheriff of this county, being the chief law enforcement officer, is able to act on that without having to go to a city manager or a city council and ask permission ‘Well can we arrest people now?’” he said.

Valena Beety is a law professor and deputy director at the Academy for Justice at ASU’s Sandra Day O'Connor College of Law.

“I really think criminal justice reform is a key issue in Arizona and nationally right now and really is going to play a role on the ballot,” Beet said.

"I really think criminal justice reform is a key issue in Arizona and nationally right now and really is going to play a role on the ballot."
— Valena Beety, Academy for Justice at ASU’s Sandra Day O'Connor College of Law

She says Sheridan’s history with the department puts him in a tricky position as a candidate for sheriff, “because Sheridan is both trying to say ‘I’m continuing the legacy of tough on crime, but I’m not continuing it in the same way as Arpaio.'”

While the tough on crime pitch is usually a winner, Beety says public opinion on law enforcement is changing, and voters may be looking for a candidate who is more open to reform.