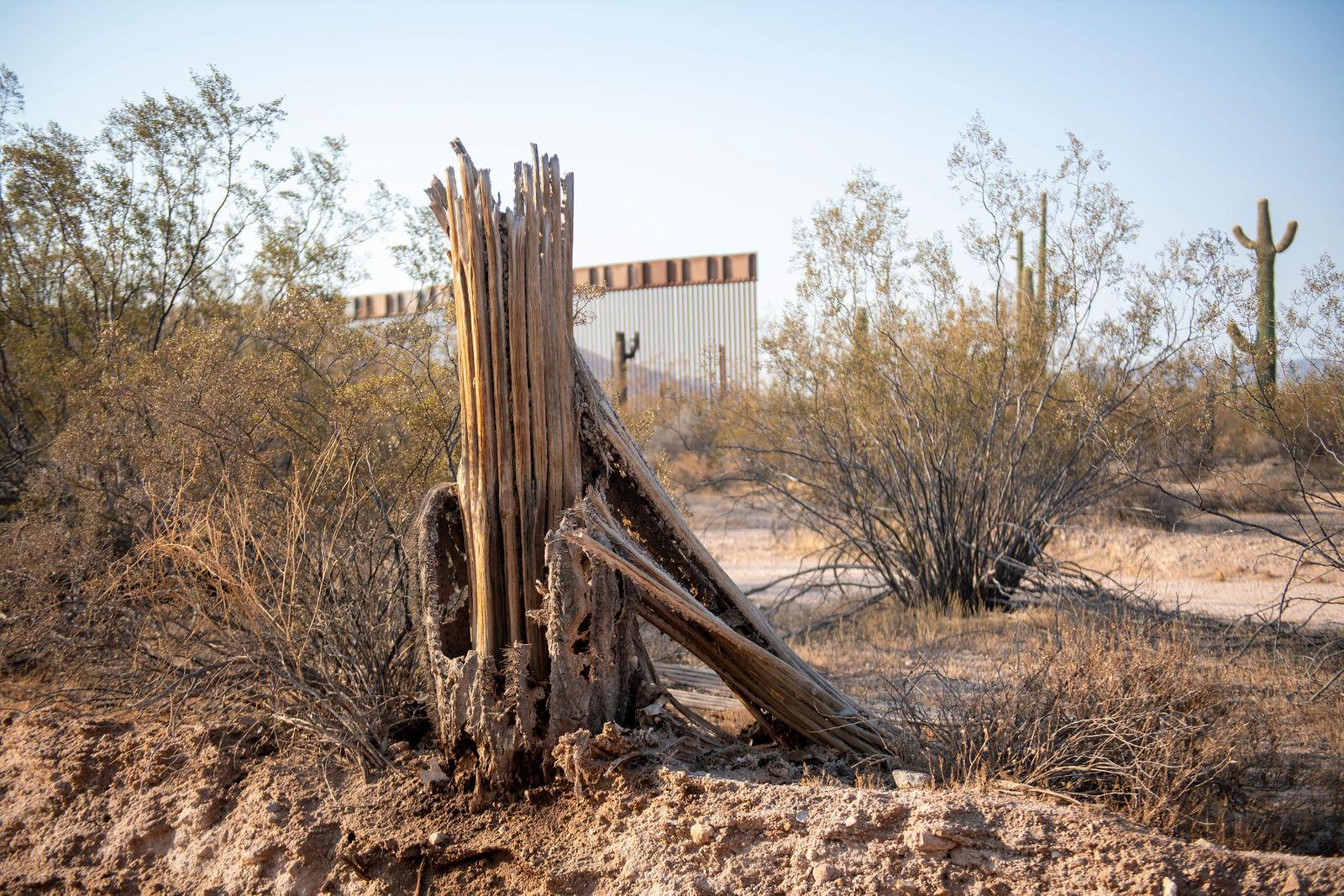 STEVE GOLDSTEIN: What do you do when a global pandemic upends your business? Well, for one wedding and concert photographer from Charleston, South Carolina, the answer is on the Arizona border.

MARK BRODIE: John Kurc's wheelhouse normally is rock stars, concerts, a bride and groom. But when COVID-19 hit and all of those events stopped, he came to southern Arizona to document the construction of the Trump administration's 30-foot wall along our southern border. It was a passion project of sorts that's turned into something of a mission.

GOLDSTEIN: He's working to ensure people know what building a wall like this in this kind of terrain entails. And the effects on the environment he's seeing as a result, including Guadalupe Canyon, he says, are devastating.

BRODIE: The environmental impact is worrying lawmakers as well. Earlier this week on Capitol Hill, Arizona Sen. Kyrsten Sinema challenged Acting Homeland Security Secretary Chad Wolf about reports of blasting in Guadalupe Canyon and the potential environmental impacts of building the wall. He responded in kind.

GOLDSTEIN: Kurc calls it a scary reality that most people, even those living in the area, are unaware of. Our co-host Lauren Gilger spoke with him more about it and the trip to the border that sparked his interest a year ago.

KURC: I was in Phoenix, Arizona, last August to photograph the Rolling Stones. And I had a few extra days and thought, "You know, I'm going to rent a car and go down to the border" because I wanted to see the quote-unquote "invasion," and ended up going to this little town called Kino Springs because I looked on my GPS and I was right next to the wall. And when I drove up to the wall on this dirt road, I was like, "Wow, there it is." But then to my left, there was nothing — no wall, no border fence. It was just me and some javelina and some cows and horses. And so I started driving the road and was just fascinated that, you know, I didn't see any border patrol — I just saw wildlife. And so that kind of drew me in to, to the area. And that was a year ago. When COVID hit, I pretty much lost all my concert and my wedding business. So I was like, "You know, I need to do something I'm really passionate about." And I'd been drawn back to this area and what's going on with the entire border. I've traveled all the way from Zapata, Texas, to San Diego along the road documenting the entire process. 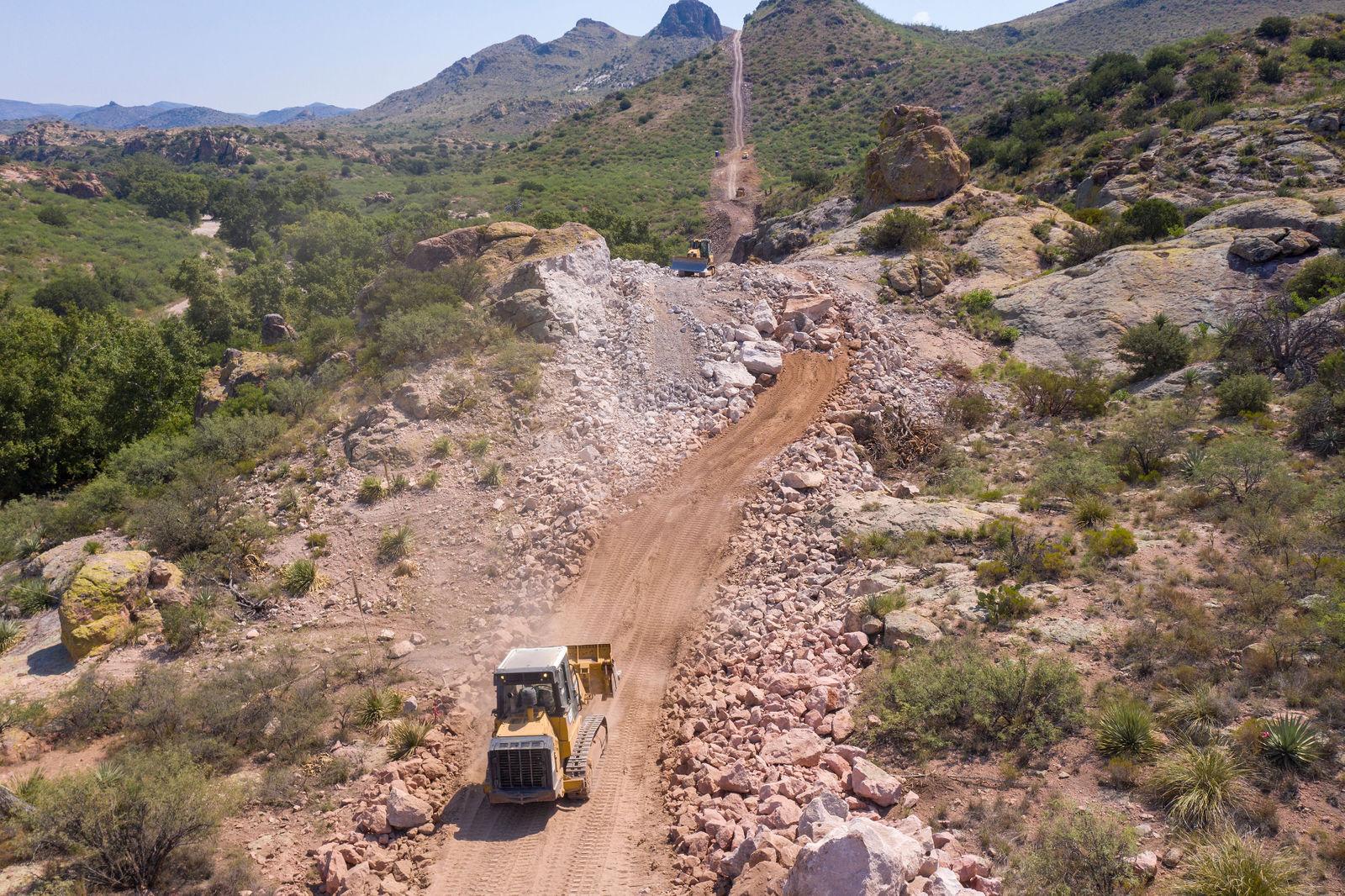 John Kurc
A an aerial view of a bulldozer clearing mountains to build the border wall from photographer John Kurc.

LAUREN GILGER: So describe for us, you know, what this has been like. You're not from this area. You've got a little bit of a Southern accent I can hear there. How are you being received in these towns on the border? What's this been like being an outsider and coming in to report and to see what's there?

KURC: Well, Border Patrol is always pretty curious. I do get pulled over a lot because it's pretty unusual to see a guy in a Honda Pilot that's not a — you know, it's not a four-wheel-drive vehicle out in the middle of, you know, literally I'm in areas that, you know, I have no cell service two or three hours away from a town or a paved road. When I tell them what I'm doing, I'm documenting what's going on, most of them, they're still stunned. The people that live in the towns have been very gracious. They're the ones that are being affected. They have relatives that live a mile away — they can't come over anymore.

GILGER: So describe for us what you're seeing in terms of the environment here. You're watching the construction happen essentially and following along. What's it look like?

KURC: It's like a scorched earth, what's happening in Arizona right now. I've been all the way from Organ Pipe to the Tohono Reservation, San Bernardino — that's a wildlife refuge with an aquifer that feeds both Mexico and the United States. And then the San Pedro River right now is being dammed up — you know, the 30-foot wall is going through there. And the biggest devastation that I've documented over the last couple of weeks is Guadalupe Canyon. They are dynamiting. In fact, yesterday, I actually videoed the dynamiting going off, but they're clearing out millions of years of terrain. And what's happening is the animals that rely on these migration paths, their waterways are all being blocked. There are only a few sections now going towards New Mexico and the Guadalupe Canyon area. At points they're 70% grade. It's extremely difficult to walk up. And they are blasting through that entire mountain range to build this wall. So the devastation's just staggering. To see it last August and then last October, and then in the winter, I came back down — none of that was there. All this has changed in the last five months. It literally was untouched. And now it's just shocking to see. It's very sad to see what's going on.

GILGER: What are you doing with these photographs? Are you selling them or are you just posting on your social media feeds? Are you trying to get them out to news outlets?

KURC: I'm, I'm trying all that. I started a new website just for these matters, and I have gotten a lot of attention. People are — you could say they're "woke" when they see these images. And I try to tell people, you know, "Compare what I saw in August with this drone footage versus the drone footage I took today." And I am doing quite the majority of my documentation now is not still photos. It's drone footage. 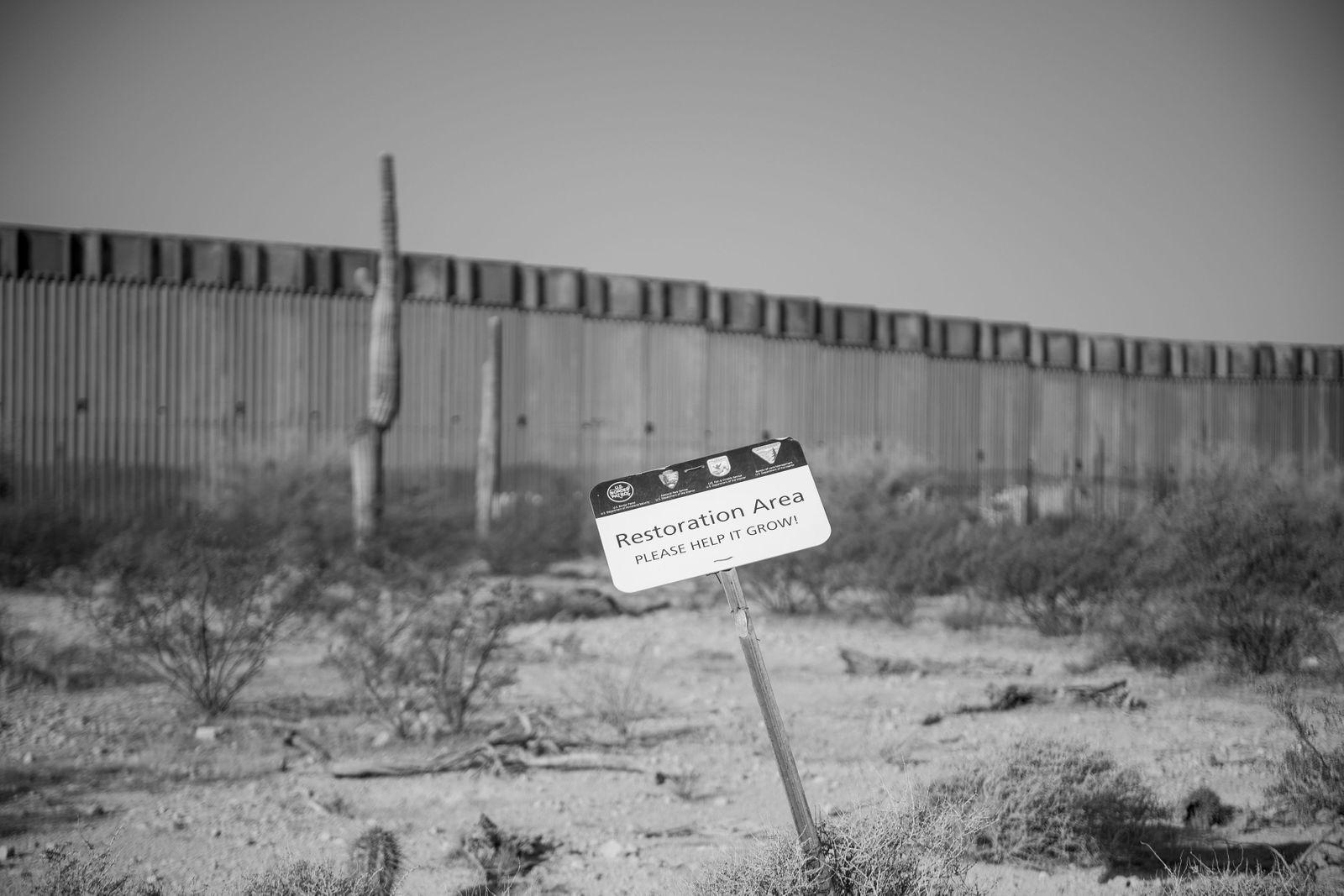 John Kurc
A view of the border wall from photographer John Kurc.

GILGER: So as you document this, what's your game plan moving forward? Like you're by trade an event photographer, right? And that doesn't seem to be coming back anytime soon. Do you think this experience will change your trajectory here?

KURC: It has. I didn't resign a lease in Charleston. I don't foresee going back. My daughter's being grown, all three of them, they understand that I'm kind of on a mission right now. I'm not looking to make lots of money. I just want to keep documenting this. And I'll keep documenting it. I don't foresee ever changing direction at this point, because even though Arizona is getting impacted the most right now, because most of the land along the border is state-owned or Bureau of Land Management-owned, the administration pretty much has carte blanche on what they can do in this area. And they are definitely, you can see a big difference between Texas, New Mexico, Arizona and California. And I've been in all four states, so I'm really, really concentrating on Arizona from now on.

GILGER: All right. That is John Kurc, a photographer who is documenting what's going on at the border with the border wall construction there. John, thank you so much for coming on The Show to talk to us about this. And best of luck.

KURC: You're welcome, Lauren. And I thank you very much.

BRODIE: We also reached out to the Department of Homeland Security for the story, but have not received a response.