Summers in Phoenix are punishing. And this summer was scorching hot. July and August were the hottest and driest on record. And while much of the country is beginning to cool off as autumn approaches, we can expect more triple digits into next week.

Summers in Phoenix are always brutal, but this summer was arguably the worst ever.

According to the National Weather Service, we experienced a record-smashing 53 days where temperatures were 110 degrees or higher. The previous mark of 33 days was set in 2011.

And sometimes it exceeded 115 degrees. There were 14 of those miserable days. Despite the less than ideal weather, many of us still enjoy the challenge of hiking up a mountain on a really toasty day.

"I can tell you that in one day, we did have five mountain rescues," said Phoenix Fire Department Captain Todd Keller. He's talking about what happened on Sept. 6.

"We had three on this Echo Canyon trail head on Camelback Mountain," he said. "And those three were all back to back to back. So as soon as our firefighters had gotten down, they were re-dispatched for someone having difficulty, so let's fire first had to turn around and put there get some water in their system and head right back up the mountain.

"That was a busier day for the Phoenix Fire Department," he said.

It was also 113 degrees — and another record breaking day. 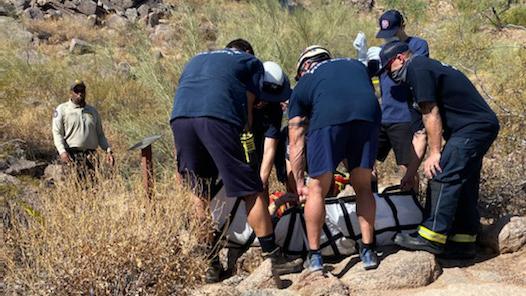 But this year’s excessive heat was compounded by the coronavirus. And like our weather, the virus hit Arizona hard — right in the middle of summer. There were very few places people could go for relief. Libraries and public pools were closed. Movie theaters were closed; gyms were closed; even the Salt River was closed to tubers due to the high risk of spreading COVID-19.

And if you wanted to drown your sorrows at a bar, well, those were closed, too.

But if 2020 has taught us anything, it’s that if something can go wrong, it absolutely will.

"It's been absolutely insanity this year. We've been so busy compared to prior years."

Yep. 2020 is the year where your air conditioner will go kaput. And doing this job, in this extreme heat, is no walk in the park.

"It's been absolutely insanity this year. We've been so busy compared to prior years."
— Aaron Fagan, Goettl Air Conditioning and Plumbing

"Depending on what kind of roof they have, it's just it's hitting that roof your feet start. You can almost feel like your feet are boiling," said Fagan. "And then in the attic, if it's 110 out side, it's it's like 130 in that attic."

But with so many people staying home, and pushing their AC units to work even harder

"We had guys out till one two in the morning sometimes, doing service calls and the homeowners wanted us there they you know, it was that late and they were happy to see us," he said.

Besides coping with the heat, these guys were working in a global pandemic. And wearing personal protective equipment like masks, well, Fagan says it just made the work harder.

But the reality is, broken air conditioners and overheated hikers are not out of the ordinary during the summer months. Falling saguaros, however, are.

"I was definitely surprised to know we all were I'm very intrigued," said firefighter-paramedic Alexander Yates with the Glendale Fire Department. "That’s not a normal call that many people run,"

He and his engine got a call about a cactus.

"And when we showed up, we didn't really know what to expect, honestly," he said. "I had never been on one of these calls before, didn’t know if it was going to be a 15-foot cactus and someone was just a little worried or if  there was going to be 30-, 40-foot tall saguaro and it was."

The saguaro crashed into the garage and a parked car. Clearly, these beautiful cactui are no joke. They’re heavy and covered in sharp spines. But why are they falling?

Raul Puente is the curator of living collections and a research botanist at the Desert Botanical Garden in Phoenix.

"I think that there are several reasons but the heat is definitely the main cause," he said./p>

Saguaros have evolved to hack it in this heat, and they’re also in tune with the weather. So, like us, they’re expecting the annual monsoon. But that, too, fell flat this year. And instead of replenishing water lost due to the heat, saguaros, were left high and dry.

Kathy Ritchie/KJZZ
Raul Puente is the curator of living collections and a research botanist at the Desert Botanical Gardens.

And there’s something else, says Puente. Saguaros perform photosynthesis in the evening, when temperatures are supposed to be cooler.

"What is happening we see during this summer, and especially this year is that it's still midnight and we're close into 100 degrees," he said.

And that’s too hot. The average low for July and August was in the upper 80s. Still really warm. But it’s during that process when saguaros turn carbon dioxide into food or energy.

Now, even that’s not happening the way it’s supposed to.

Then again, nothing in 2020 has happened the way it was supposed to.