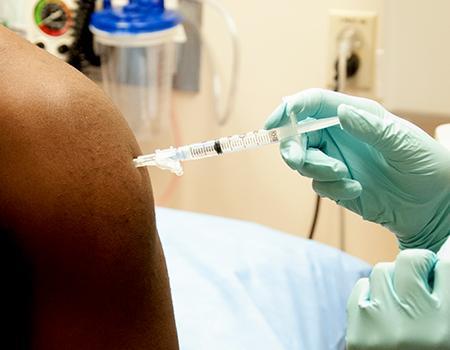 National Institute of Allergy and Infectious Diseases
A vaccine is a shortcut to immunity, says Andrew Noymer with University of California-Irvine.

Herd immunity is likely a term you’ve heard with respect to defeating the coronavirus pandemic. But public health experts in Arizona, in the region and at the federal level are warning against such misinformation.

The concept returned to the vernacular this spring when Sweden’s prime minister advocated it as a public health strategy for dealing with the pandemic.

But, voluntary conditions like social distancing and banning large gatherings were also part of the social bargain with Swedish citizens.

Although the term occupies news cycles and social media news feeds, what does it really mean versus what your network of friends, family and talking heads who aren’t medical experts tell you?

“Herd immunity itself is a concept by which epidemics tend to fade when a certain percentage of the population have already had it. Because the virus cannot bounce back and forth from person to person infecting all the way. When a virus encounters someone who’s already immune, it’s like a dead end for the virus,” according to Andrew Noymer with University of California-Irvine. He’s a population health and disease prevention expert.

The term was first coined in 1923, but Noymer says it goes back to epidemiological studies of measles in the 18th century in the Faroe Islands, between Norway and Iceland.

He also said the concept recently has become synonymous with the idea of doing nothing and letting the virus just run its course which will leave a lot of deaths in its path. 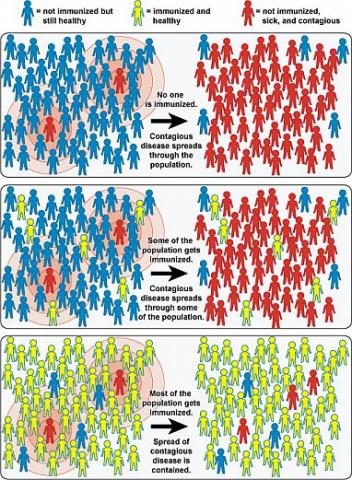 National Institute of Allergy and Infectious Diseases
The more people who get vaccinated, the harder it is for an infectious disease to spread.

Most public health experts like Noymer agree herd immunity is not really a wise approach to defeat COVID-19.

“We don’t have anywhere near the percentage of the population exposed, infected and recovered or somehow immunized to COVID-19 yet. We’re not going to get to herd immunity until much more people are exposed to the virus or if we have a vaccine which will enable people to get immunity,” according to Dr. Shad Marvasti, a public health expert with the University of Arizona College of Medicine in Phoenix.

Marvasti said until there’s a reliable vaccine, “The idea that we would simply not engage in public health guidelines, like social distancing or mask wearing, and just let people get infected until we reach herd immunity is really unsettling and not wise.”

At the end of August, the Washington Post reported one of President Donald Trump’s new pandemic advisors touted the concept of herd immunity as an effective strategy for dealing with the pandemic.

Careful not to be political following the report, Dr. Anthony Fauci, head of the pandemic task force advising the Trump administration, spoke to MSNBC prior to the Labor Day weekend about the dangers of adopting such a notion.

“We’re not there yet. The fundamental strategy that we clearly articulate and go by through the task force is to try to prevent as many infections as you can possibly prevent that when you get someone who’s infected you do the identification, isolation, and contact tracing,” he said.

In referring to the report, Fauci acknowledged from his vantage point, “We certainly are not wanting to wait back and just let people get infected so that you can develop herd immunity. That’s certainly not my approach.”

Public health officials in Gov. Doug Ducey’s administration have not adopted a policy of contact tracing and the Arizona Department of Health Services declined to discuss herd immunity for this story.

While the state led the nation in the rate of spread this summer, the numbers of reported daily coronavirus infections and deaths have decreased.