Both Democrats And Republicans See Opportunity With Arizona's Latino Voters 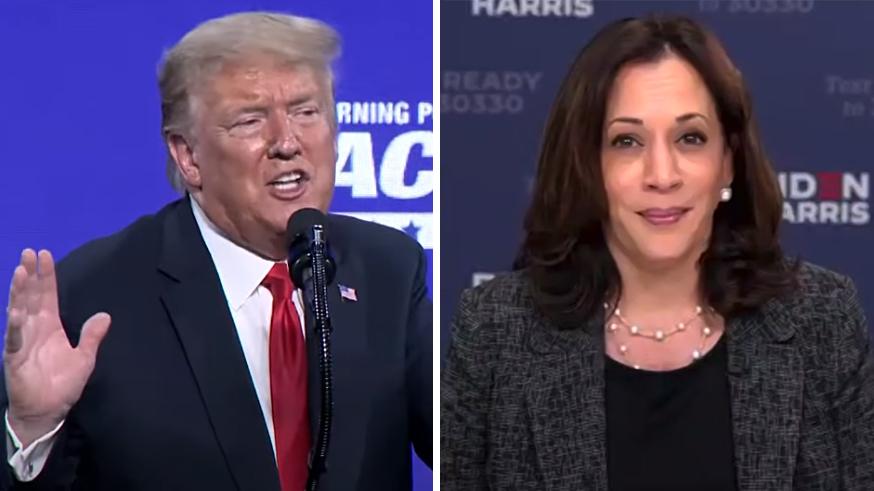 White House, Biden for President campaign
Donald Trump at an event in Phoenix on June 23 and Kamala Harris at an Arizona virtual event on Sept. 12, 2020.

Both Republicans and Democrats are seeing opportunities to win Arizona’s Latino voters, who make up about a quarter of the electorate in the state.

A lot of eyes will be on Arizona come November. Changing demographics, especially among the Latino community, have turned Arizona from a safe Republican state into an electoral tossup, making it one of the biggest prizes for the Democrats in November.

According to Northern Arizona University political scientist Fred Solop, the fact that both campaigns are vying for Latino voters shows how influential those votes could be for generations to come.

“The Democrats really believe that if they generate high turnout among the Latino vote, they’ll fare pretty well,” Solop said. “The Republicans are aware of that, they don’t want that situation to occur, they want as many of those Latino votes as they can get.”

A Pew Research study found that as many as 32 million Latinos will be eligible to vote nationwide this year. In Arizona, they’re expected to make up about 25% of the electorate. The Latino Vote Project found that three-quarters of Arizona’s Latino voters voted Democratic in the 2018 midterm elections.

Even so, both parties think they have a shot at winning over these voters.

“Early balloting begins in the not too distant future,” Solop said. “The candidates are paying attention to Arizona. We are a battleground state, in the past we’ve traditionally been ... a stronghold for Republicans. This time around that’s not the situation.”

On Saturday, local Latina business owners spoke with Harris during a virtual panel discussion. Latina Activist Mary Rabago, who owns a media company and was once a Univision anchor, said she appreciates that campaigns are finally discovering the power of the Latino vote — especially among Latina women.

“Kamala knows, and Biden knows, if they can get the voto de la mujer Latina, they get the voto from the whole family," Rabago said.

During her prepared remarks, Harris spoke about the impact of the coronavirus pandemic on Arizona businesses, and pledged that a Biden/Harris administration would make more money available for minority and women business owners.

“The Biden/Harris Administration will have access to $100 billion in low-interest loans and investments for minority business owners,” Harris said. “For Joe Biden, this is especially important in Arizona, where coronavirus has hit particularly hard.”

After Harris read her prepared remarks, she didn’t appear on camera again for the remainder of the event. Around the same time as the webinar, a few dozen people showed up to a Latinos For Trump event in South Phoenix.

Republicans want to convince Latinos that the GOP policies are beneficial to the community, and that Democrats are taking Latino votes for granted. The Trump campaign opened a community center in South Phoenix, according to Trump Victory Strategic Initiatives Director Jeremiah Cota.

At the Saturday event in South Phoenix, speakers included National Border Council Vice President Art Cueto, who touted reduced Hispanic poverty rates under the Trump administration. Latinos For Trump advisory board member Sergio Arellano spoke about school choice — a major point in the President’s education policy — and how it could benefit the Latino community. Speakers also criticized the news media’s portrayal of the President as a man who is openly racist against the Latino community.

Latino Decisions, a pollster that tracks Latino voting trends, shows how Republicans can chip away at this otherwise left-leaning demographic. In 2016, about 1 in 5 Latino voters chose Trump over Clinton. During the hotly contested 2018 U.S. Senate election in Texas, Republican Ted Cruz won about a quarter of Latino votes. By all accounts, the Republican Party does better with Latino voters than it does with Black voters.

Rabago says she’s happy that her fast-growing community is getting attention from people vying for power. Once the votes are counted, though, she says she hopes whoever wins doesn’t forget the Latino community.

“I would really call out to all those politicians trying to get our vote and our participation to not only talk to us when it’s election time, but to have that conversation ongoing,” Rabago said. “To invest in our community, to learn from our culture, to learn how faithful we are, how hard-working we are, to be part of our community, and to get to know us. Don’t only put a smile to our face when you need the vote.”