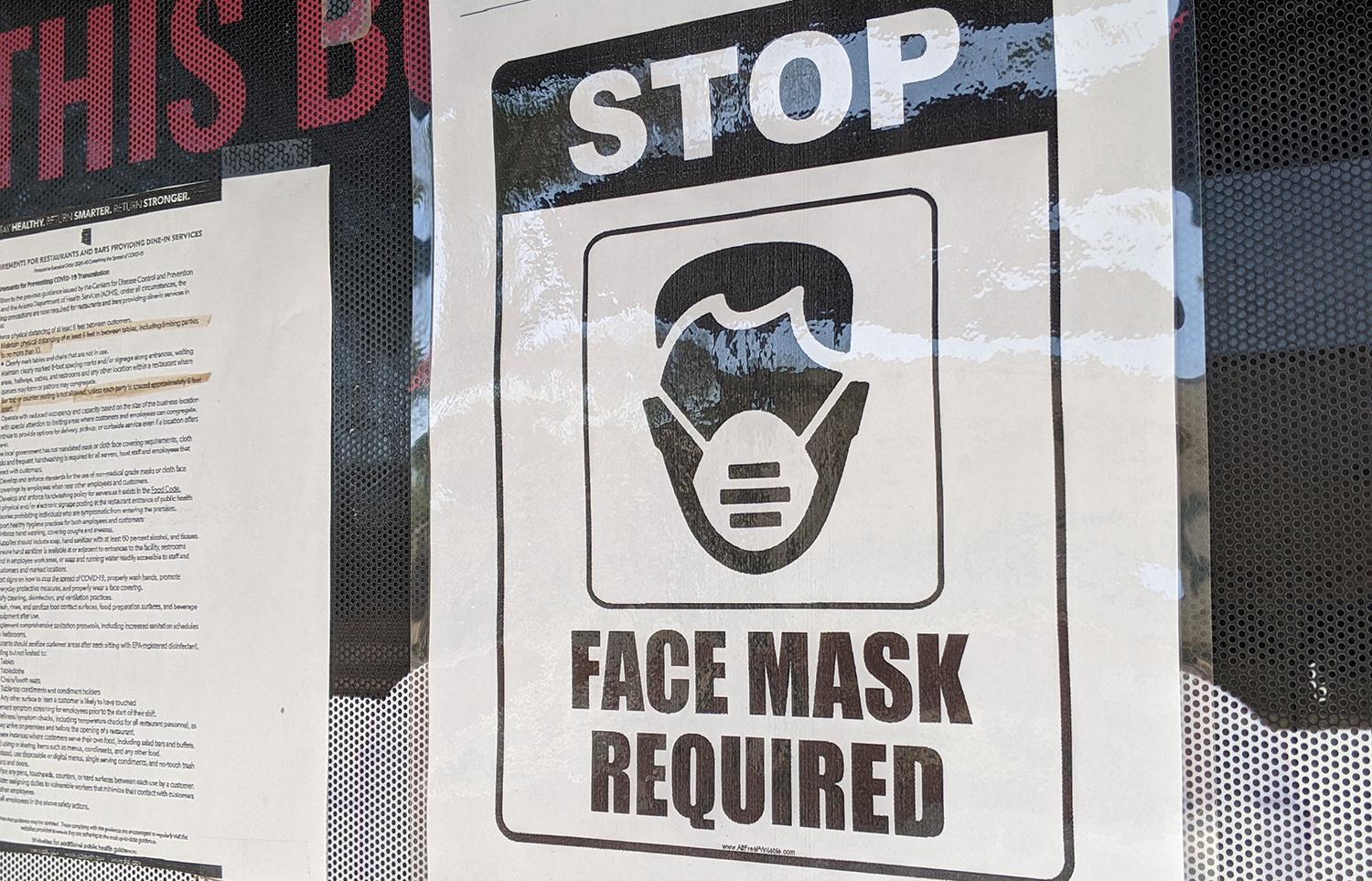 Sky Schaudt/KJZZ
A sign on a north Glendale restaurant in August 2020.

The Department of Health Services reported an 81 additional cases statewide. The last time the state saw a daily case count below 100 was in March, according to online data.

So far, 5,221 people in the state have died of the disease caused by the coronavirus, and there have been 206,045 confirmed cases. The state, once a national hot spot for infections, continues to see a downward trend in infections and hospitalizations.

The number of reported infections is thought to be far higher because many people have not been tested, and studies suggest people can be infected with the virus without feeling sick.

Despite the decline in case and hospitalization numbers, officials warned the public to keep up preventive measures over the Labor Day weekend.

About 100 people including local business owners held a demonstration on Monday at the state Capitol, calling for an end to all COVID-19 restrictions, the Republic reported. Among them was Republican State Rep. John Fillmore, who compared mask mandates to Holocaust victims in Nazi Germany “when people on their own bodies were tattooed.”

A bar in Chandler was shut down Monday after apparently violating COVID-19 restrictions.

On Tuesday, a judge denied a request by a group of bar operators to prohibit enforcement of Ducey’s executive order in late June that shut down bars. Some of the bars have been allowed to reopen as spread of the virus has lessened.

Maricopa County Superior Court Judge Pamela Gates concluded the governor’s orders on bars “are rationally related to expert data and guidance on minimizing the spread of COVID-19 in our community.”

With school districts in metro areas of Tucson and Phoenix able to return to partial in-person instruction under metrics developed by state health and education officials, some that have moved to reopen are facing staffing issues.

A suburban Phoenix high school that had to delay its planned Tuesday opening because of a lack of staff will open on Wednesday.

Students will attend class in rooms with regular or substitute teachers, and if coverage isn’t available they will be sent to “a safe area for attendance and to complete work assigned by the absent teacher.” Those areas will be monitored by school employees.

Vining was forced to call off Tuesday’s planned return to in-person instruction because the school didn’t have enough staff available to “safely open.” Tuesday instruction was done through distance learning that has been in place since the start of the school year.

Some schools have already reopened for in-person instruction. But J.O. Combs Unified in San Tan Valley was thwarted last month because numerous teachers called in sick while voicing concerns about safety.

That district finally reopened for in-person instruction Tuesday, according to 12 News, although it was optional and parents could choose to continue online learning for their children.

To help districts prepare for students to return to class, the city of Phoenix on Tuesday began distributing more than one million pieces of personal protective equipment it ordered for schools. The equipment includes sanitizer, gowns and face masks with clear windows so that students, especially those with hearing or learning impairments, can see their teachers' facial expressions.

For most people, the new coronavirus causes mild or moderate symptoms, such as fever and cough that clear up in two to three weeks. For some, especially older adults and people with existing health problems, it can cause more severe illness, including pneumonia and death.