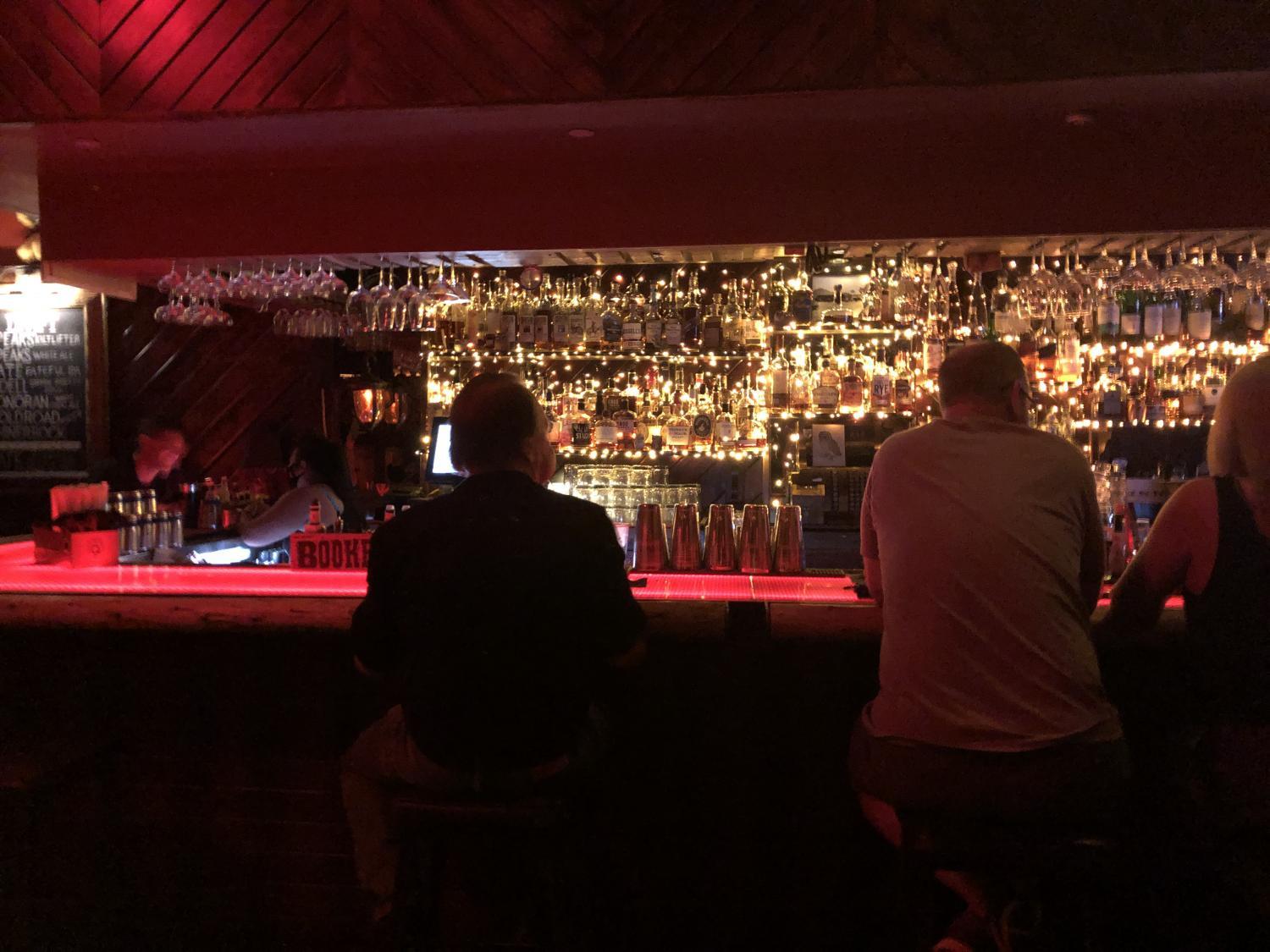 Scott Bourque/KJZZ
Customers sit at the bar at The Little Woody in Arcadia. The Little Woody, along with many other bars in Arizona, re-opened on Aug. 28 after a second coronavirus-related shutdown.

Behind the bar at the Little Woody in the Arcadia neighborhood in east Phoenix, bartender Amanda Kane prepares drinks for some of the regular guests she hasn't seen since June.

"That was the first drink I've made in two months," she said as she poured a vodka mule for a man sitting at the bar, her face obscured by a mask.

Bouncer Russ LaFlash spent the evening moving back and forth between the front door and the inside of the bar, counting the number of guests and adding them up on a clicker, ensuring the bar doesn't go above 50% of its licensed capacity.

The bar's popular pool tables and arcade games are silent, and guests are required to sit at tables or at the bar. There's no DJ or live music, no dancing or karaoke. This, Assistant Manager Elle Hoyt says, is the new normal for neighborhood bars around Arizona.

After Arizona's stay-at-home order expired in May, many bars opened without restrictions.

"We were open a month. We picked up our momentum, then we voluntarily shut down because people were testing positive in this whole neighborhood," Hoyt said. Several businesses along Indian School Road near The Little Woody had employees testing positive for COVID-19.

A significant spike in coronavirus cases started in June, followed shortly by Gov. Doug Ducey ordering all bars in the state to close again.

As of last week, the state's coronavirus numbers were declining enough that bars were allowed to open — this time, with serious restrictions.

Currently, Maricopa County is in the "moderate community spread" benchmark, which means bars may open if they maintain 50% capacity and adhere to restaurant service. Dancing, parlor games like billiards and darts, and live music or karaoke are prohibited. Guests must be seated at a table or at the bar top, and wear masks at all times when not at their seats.

"We're not like we were before, where we had the dance floor, and people were dancing and wall-to-wall people," Hoyt said. "People have to have a seat, and we have staff roaming around making sure (guests) have no reason to get up." 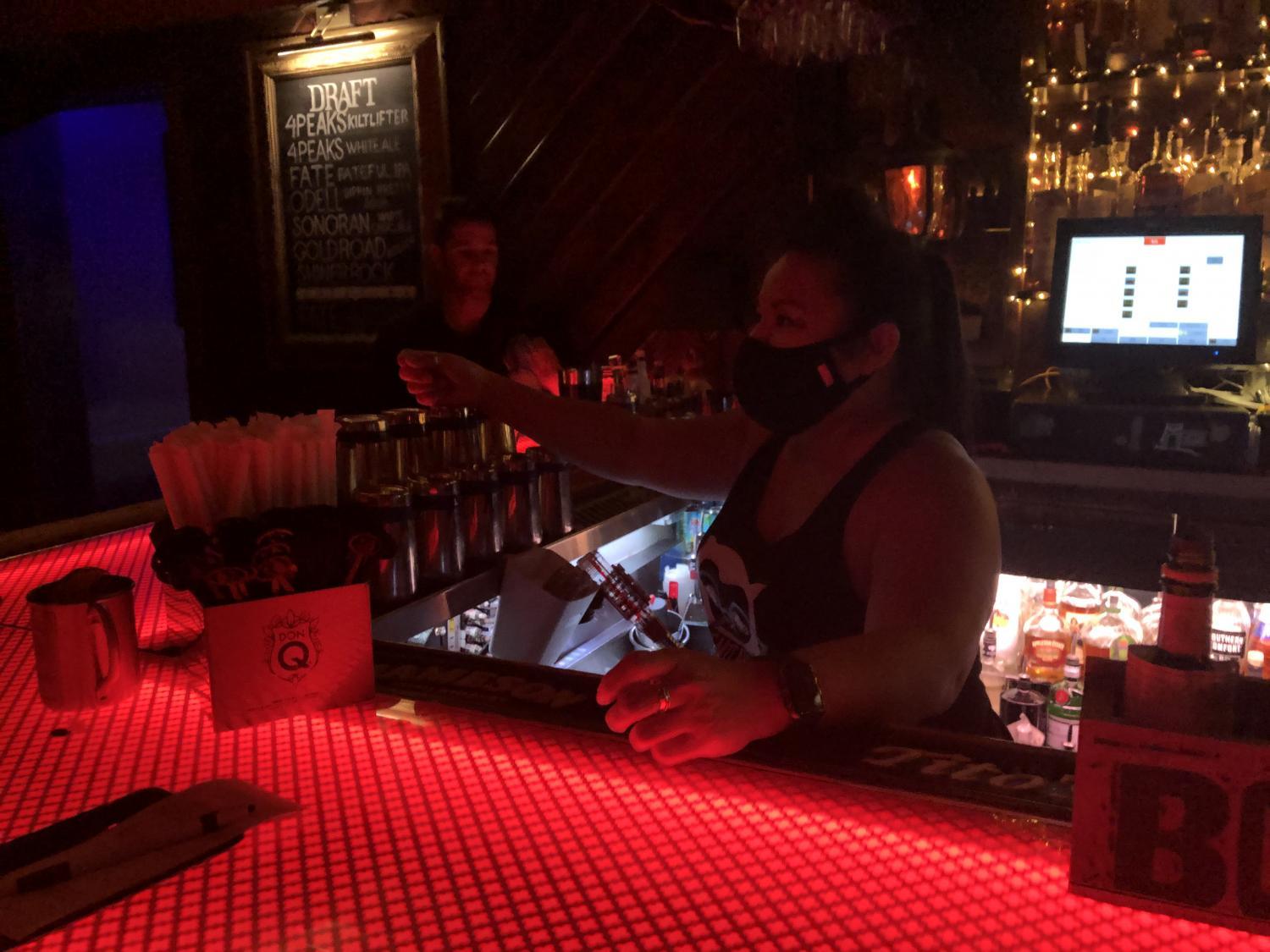 Scott Bourque/KJZZ
Elle Hoyt serves customers at The Little Woody for the first time since June.

On their first night back open, staff at The Little Woody said things went smoothly. Guests wore their masks, and for the most part, stayed at their tables. The bar reached 50% capacity later in the evening, and LaFlash had to hold customers at the door. "People were very patient with him, thankfully," Kane said in a text message the morning after.

A few miles away in Old Town Scottsdale, though, at least two nightclubs were found flouting the rules, according to the Arizona Department of Liquor Licenses and Control.

The Bottled Blonde and Casa Amigos had their licenses suspended indefinitely after detectives from the Department of Liquor observed the bars violating social distancing, mask, dancing, standing, and table occupancy rules, according to a press release.

"Liquor licensed entities intending to open had no less than two weeks advanced preparation time to ensure requirements were in place," the Department said in a statement. Detectives will continue to enforce public health rules and suspend liquor licenses for any establishment that isn't in compliance, Director John Cocca said.

Hoyt says she's worried that the actions of large nightclubs will lead to all bars being ordered to shut down again — even the ones following the rules.

"It's stacked against us," Hoyt said, referring to smaller, neighborhood bars like The Little Woody. "They're not busy like Old Town Scottsdale, where people are there to socialize, jam-packed to the gills. You’ve got some really nice little neighborhood dive bars, that during the week they’re already at 25-50% capacity. There is enough space for people to social distance."

In order for bars with food permits to ease restrictions and return to some degree of normalcy, the county has to declare the “minimal community spread” milestone. That requires community cases to drop to a point where 3% of tests are positive. Establishments can operate as bars, but even then, they still have to maintain 50% capacity.

“Everybody needs to get tested,” Hoyt said. “You can get tested for free. The only people who are getting tested now are sick people, or people who don’t feel well. Especially if you feel like you’re not sick, go get tested, because it’ll bring positivity numbers down.” 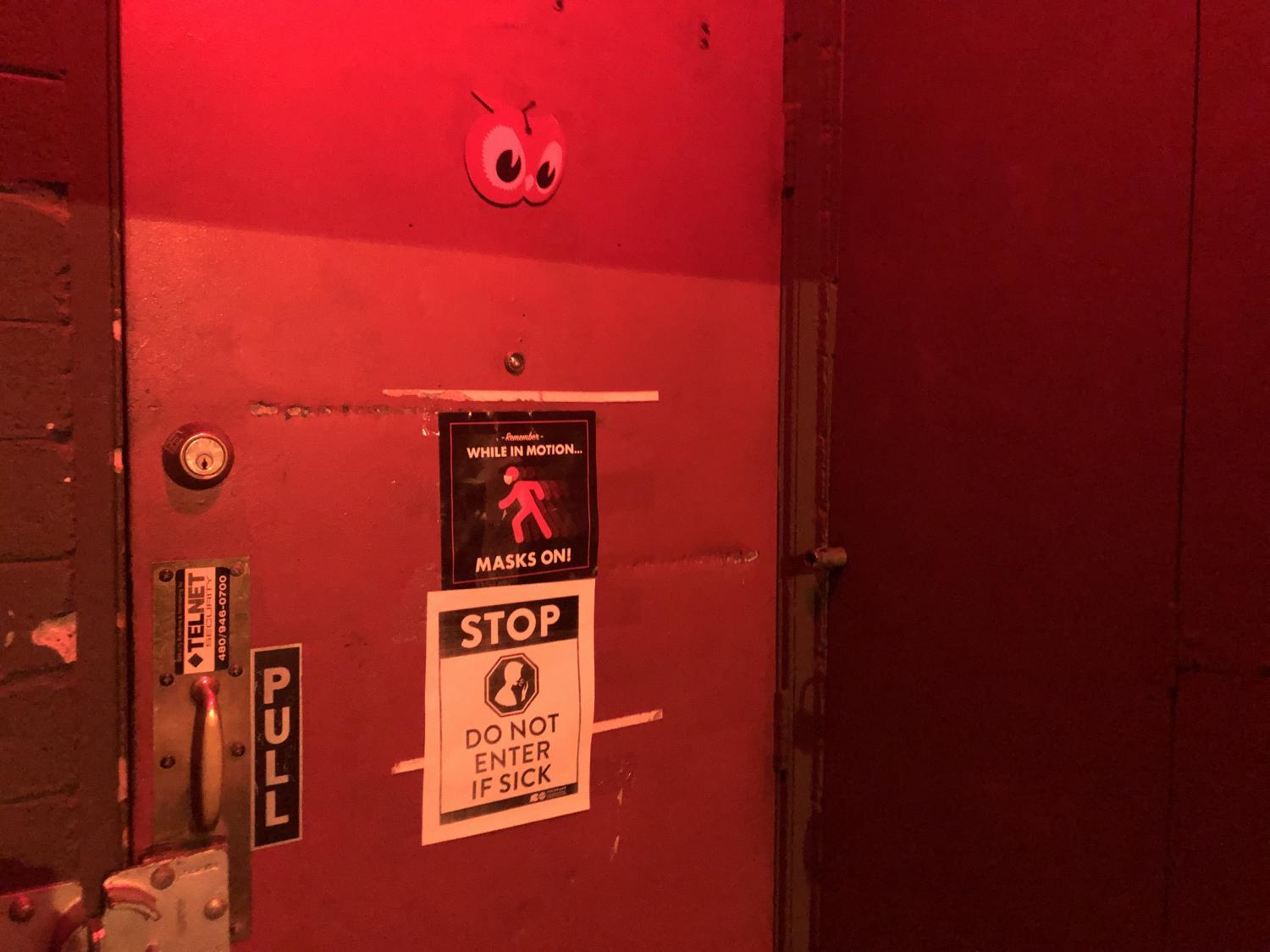 Scott Bourque/KJZZ
The entrance to The Little Woody now has mandatory public health messages. The Little Woody, along with many other bars in Arizona, re-opened on Aug. 28 after a second coronavirus-related shutdown. 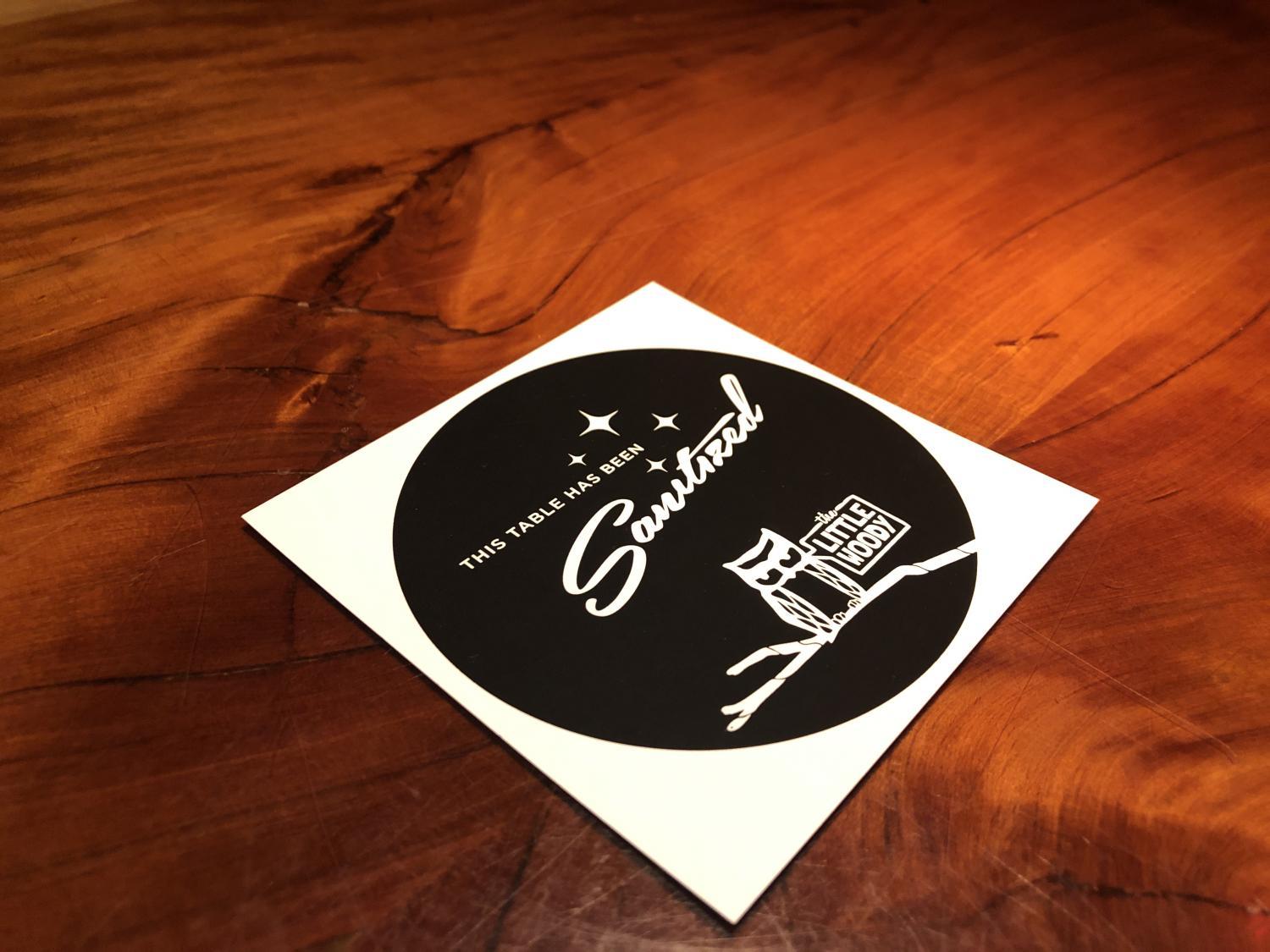 Scott Bourque/KJZZ
Under new guidelines, neighborhood bars like The Little Woody in Arcadia must adhere to restaurant service guidelines.
Scott Bourque / KJZZ
Bars were allowed to re-open on Aug. 28th, but parlor games like billiards and darts are prohibited.
BusinessCoronavirus