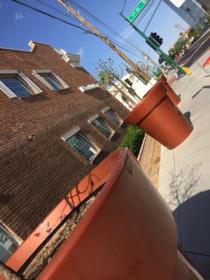 On the south side of Roosevelt Street in downtown Phoenix, between 1st and 3rd streets, are 15 large terracotta-colored planters.

The planters, which are 5 feet tall, dominate the sidewalk, despite it being 11 feet wide.

Sweet olive, a drought tolerant tree the city hopes will eventually provide shade, were planted last month. They’re stressed out because of the intense heat, but Gail Brinkmann, a landscape architect with the city, is hopeful they’ll come back.

She says the planters were used "because there’s a 12-inch waterline, a 24-inch sewer line, an underground electric line and an overhead powerline, so there was no way to get a plant in the ground."

The planters cost about $2,800 each and were paid for using a federal grant. The city also paid a small percentage of the total cost.