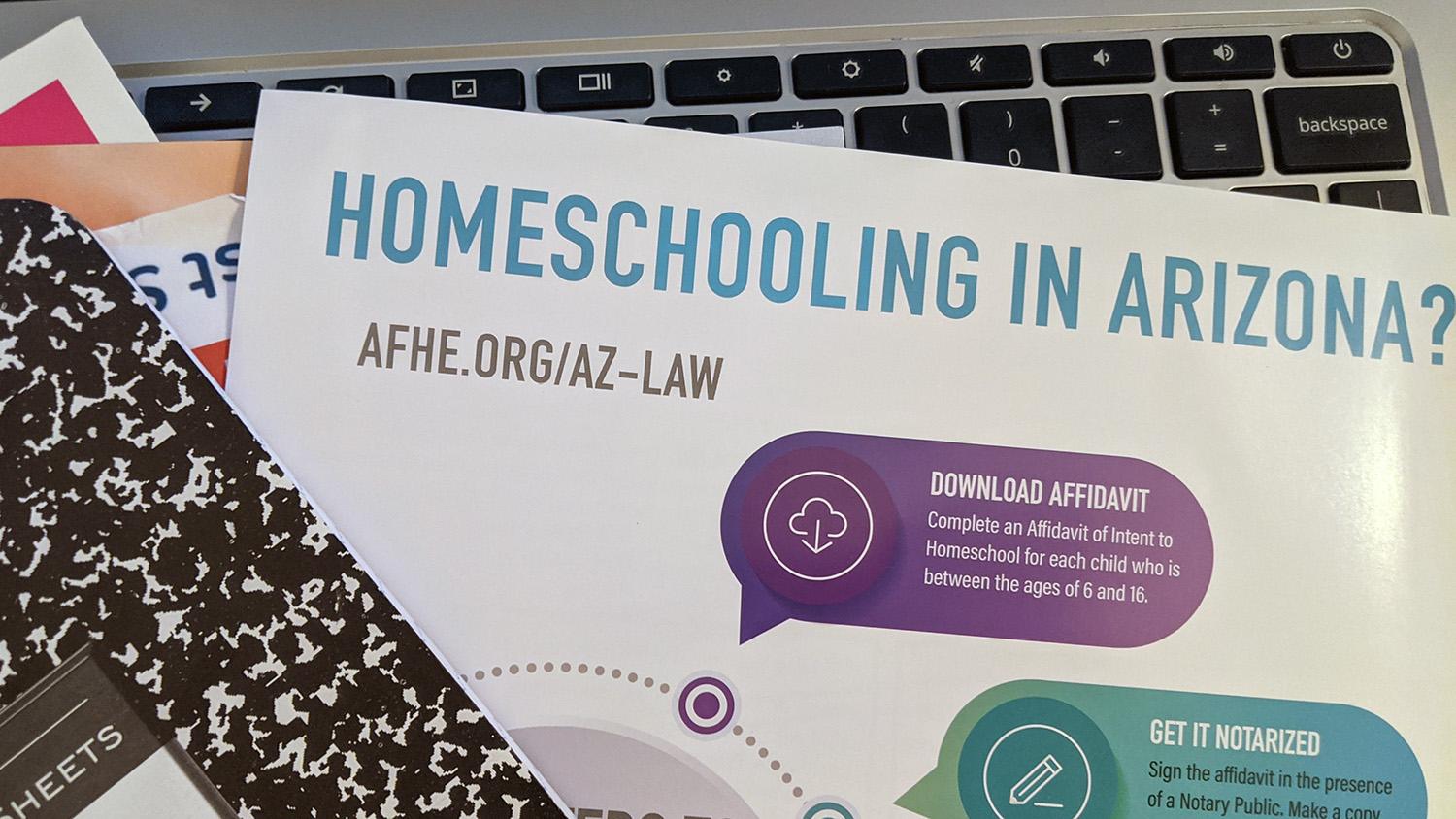 Sky Schaudt/KJZZ
A flyer with information about homeschooling in Arizona.

STEVE GOLDSTEIN: [On Aug. 6], the Arizona Department of Health Services announced benchmarks it wants school districts to reach before bringing students back on campus. The districts don't have to follow those recommendations, and the uncertainty and concern around the pandemic will likely lead to many parents keeping their children at home. During the past few months, we've already seen — out of necessity — a huge increase in at-home learning. As part of that, there's also more homeschooling by parents. Lily Altavena of The Arizona Republic has written about that shift and is with me to talk about it. Lily, what's the overall landscape for home schooling in the Phoenix area and across Arizona right now?

LILY ALTAVENA: Yeah, so in Maricopa County, there is a — has been a, a pretty sizable increase in home schooling. Obviously, the vast majority of kids are still choosing public, district and charter schools. But, you know, we have now more than 14,000 kids in Maricopa County are going to be home schooled, according to the county. And, you know, in July alone — in July 2019 — about 300 families reported that they were going to start homeschooling their kids. In July 2020, more than a thousand families reported that they're going to homeschool their kids. That is a pretty big increase, and home schooling is a, you know, a completely different ballgame than the virtual schooling that a lot of Arizona kids are getting from their school districts. You know, as one expert told me, there is a support system to that virtual learning that school districts are giving. For home schooling, that's parents on their own. You know, that's parents — they're gonna have to go out and find a curriculum. So curriculums that homeschooled kids take can definitely vary from kid to kid, you know? Some parents want maybe a religious aspect to their homeschooling, some, you know, want different aspects. They do have to learn certain subjects. So they have to learn the basics — grammar, English, science, math, all that kind of stuff. And then there's room for creativity, because it takes a lot less time of the day to do homeschooling with your kids. And in the ideal, experts say, is, is to take that extra time and, and do some cool projects. You know, science projects or, or math projects or whatever the kid is interested in. That's kind of the upside.

GOLDSTEIN: When you mention religion, it makes me think about how homeschooling has been seen, at least perceived in the past, that it was more for, for parents who are opting out of being in a school that they thought was maybe not teaching what they wanted to be taught. So are we seeing in part because of the pandemic, a difference there? At least a different perception?

ALTAVENA: You know, I can't say. I do think that this is, you know, another kind of step in the school choice movement. This is a choice that parents are making. Some parents are really upset that schools are not starting in-person on time as they are in other states or, you know, as the president would want to or as other leaders would want to. In, so, yeah, I think you are seeing a lot of school choice. One thing that, you know, one expert told me is that if parents are choosing homeschooling, usually they, they know what they're getting into. They are prepared for the added responsibility, because it is a big added responsibility. I mean, if you're a parent who is tea- you know, working with, working all day while your kid is virtual learning from a school district, you're probably already having to come in and work with some of the technical support aspects. So homeschooling is that, you know, magnified by a lot more because you really need to be with your kid.

GOLDSTEIN: Give us what happens if a parent does decide, "All right. At least for a while, I want to try homeschooling." Is it more than just a rubber stamp? Do they actually have to go through a certain process?

ALTAVENA: Well, they have to put in an affidavit with the state and, you know, an affidavit with the state is, I think it involves a birth certificate, a couple other things basically saying, "Yep, I'm going to homeschool my kid and yep, I'm going to follow the law, which is, I'm going to make sure that they're taught all those basic subjects." It's really, you know, once you get past the paperwork, it's choosing a curriculum, figuring out, you know, what is their social circle going to look like as a kid, because kids still need to be socialized and there is a whole other infrastructure to socializing kids. So getting them involved in interm — intramural sports somehow, maybe through the local school district. And obviously, in a pandemic.

GOLDSTEIN: Can we potentially see an area of inequity with homeschooling as we see in schools themselves, in districts? Is there something where if a parent is more well-off, they might be able to provide something more?

ALTAVENA: Well, you know, kinda just like the school landscape, the homeschool landscape is similarly inequitable. So you've got, homeschool students in Maricopa County are concentrated in wealthier areas. Areas where the median income is higher, so the higher the median income, it according to my analysis, it looks like the higher number of home school students — the higher proportion of home school students compared to the school district. And that is because, you know, time is money. So parents need to usually be around their kid when they're being home schooled. And also, curriculum can cost money, supplies cost money. There are a lot of support services that schools give that you can't give in home school. If your kid needs to be on free and reduced lunch, there is no home schooling, free and reduced lunch. Lunch is, you know, what the parent makes or what the parent provides. So naturally, there are fewer low-income students participating in home school. And that is just because of the nature of it.

GOLDSTEIN: Any reason to think because there's still that uncertainty, that we may see even more families turn to some sort of home school?

GOLDSTEIN: That is Lily Altavena. She covers education and many other things for azcentral and the Arizona Republic. Lily, thanks as always. And stay well.

ALTAVENA: Thank you so much. Talk to you soon.