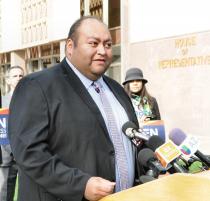 With Democrats eyeing November pickups they hope will give them control of at least one chamber of the Arizona Legislature for the first time in decades, business interests that usually back Republicans are pumping cash into their Tuesday primaries.

The hundreds of thousands of dollars spent in heavily Democratic state House districts, some of it of murky provenance, reflects the unusual stakes for a party long relegated to the sidelines at the state Capitol. It has spooked progressives who worry the business-backed Democrats would stymie their priorities or work closely with Republicans.

“This would just completely undermine 10 years of work if we go into our first Democratic majority in a generation with conservative Democrats in charge,” said Randy Perez, democracy director for Living United for Change in Arizona, a progressive Latino advocacy organization better known as LUCHA.

Republicans have narrow majorities in the Legislature. A net swing of two seats in the House or three in the Senate would give Democrats control of a legislative chamber for the first time since the 1990 election. Controlling a chamber would allow Democrats to block Republican legislation and negotiate a budget with Republican Gov. Doug Ducey.

House Democratic leaders currently come from the progressive wing of the party. In the minority, the leadership shapes the tone and messaging of the caucus. In the majority, the leadership would pick up considerable power to dole out committee chairmanships, influence what legislation goes forward and choose priorities for negotiations with Ducey.

“The business community is beginning to understand the importance of investing in relationships on the Democratic side of the aisle,” said Joe Wolf, a Democratic political consultant and spokesman for Arizona Integrity PAC. The political action committee is funded by a group of business executives known as Greater Phoenix Leadership as well as Realtors, Arizona Public Service and Southwest Gas.

With Democrats possibly poised to take power, he said, businesses want allies who will hear them out. It's not ideological, Wolf said. Rather, they're backing candidates who are “willing to work with folks, listen to all sides and have an open-door policy."

It’s a strategy that’s worked for businesses in other states where Democrats hold power. In California, a group of business-backed moderate Democrats routinely frustrate their more progressive colleagues on a range of issues from climate change to labor laws to tax increases.

Arizona Integrity PAC has reported spending at least $150,000 backing Daniel Hernandez and Alma Hernandez, moderate incumbents from Tucson, who are siblings, and Debbie Nez-Manuel, a political newcomer who’s running against a slate of progressives in Tempe.

Neither Hernandez responded to requests for comment. Nez-Manuel said she doesn't know who the donors are or what they want.

“I don’t call myself progressive, moderate or whatever political term is out there,” she said.

Another group called Better Leaders, Better Arizona has reported spending $260,000 in Democratic primaries, most of it backing the same three candidates but also three others running in Phoenix. The group is funded by Denver-based Unite America.

Unite America representatives declined an interview request. A spokeswoman, Brett Maney, said in a statement that the organization backs candidates “committed to finding solutions for Arizona’s toughest challenges.” She did not disclose the donors, saying only that they “want to elect leaders who put voters first.”

On its website, the organization says it supports governance reforms such as independent redistricting, ranked-choice voting, nonpartisan primaries and mail voting. But progressive Democrats are skeptical of the motives, noting the PAC’s treasurer is a former spokesman for the Arizona Republican Party, Tim Sifert. The group is also spending heavily in Republican legislative primaries through a different PAC.

It’s unclear how the two organizations are related. Their mail is visually identical except for the “paid for by” line at the bottom. Political consultant Luis Acosta is registered as the chairman and treasurer of the business group and is also listed on the Unite America website as the organization’s Arizona state director.

Acosta referred questions to Wolf, who declined to comment on the relationship between the two organizations.

Among the other races drawing attention is a comeback effort by former lawmaker Catherine Miranda, who would be the only Democrat opposed to abortion rights if she wins.

“They’re allies of Ducey,” said Emily Kirkland, executive director of Progress Arizona, which promotes candidates and proposals favored by the left. “They operate in really close coordination with the Republican establishment.”

Another group with ties to building trades unions is also spending big to back many of the same moderates getting support from business interests, which has confounded some Democrats.

A big-money ideological fight is also playing out among Republicans. Two longtime lawmakers are locked in a knock-down, drag-out fight for the GOP Senate nomination in a north Phoenix suburban district that's attracted at least $1.8 million in spending. State Sen. Heather Carter, known as one of the more moderate GOP lawmakers, is defending her seat against a challenge from Rep. Nancy Barto, a social conservative who has embraced anti-abortion and religious freedom legislation.