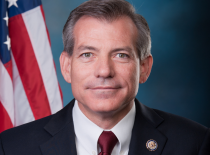 The five-term Republican congressman from Fountain Hills was investigated by a House Ethics Committee because of alleged misspending by his campaign and official office, including his former chief of staff.

Last year, he said alleged violations were due to a clerical error. But the committee found "substantial reason" to believe he violated House Rules and federal laws related to undisclosed campaign contributions, personal expenses covered by campaign funds and a general mixing of campaign and official business.

Now, in a deal with the committee, Schweikert has admitted to 11 ethics violations and agreed to a $50,000 fine.

In a statement, a Schweikert spokesperson said, "We are pleased the Committee has issued their report and we can move forward from this chapter."

"Although the adjudicatory process would provide me an opportunity to challenge aspects of the (report) I believe to be misleading, inaccurate, or unfair, it would require financial resources that I do not have and would significantly delay closure for me and my family," he wrote.

The report also found "a devastating breach of professional and personal trust" by his former advisor and friend, Oliver Schwab.

"Since the start of this investigation I have learned a great deal about Mr. Schwab's character and actions that I regretfully did not know at the time," Schweikert wrote, "but I appreciate that I should have taken a greater role in overseeing his activities, and the activities of other staff, whether I was aware of that information or not."

The congressman expressed confusion at accusations that he had been uncooperative with investigators, but ultimately accepted their findings: "I accept the (committee's) conclusion that I fell short in fulfilling my own responsibilities by not adequately supervising my staff and others working on my behalf."

Schweikert is not facing a primary opponent to hold his seat, but he is among Republican incumbents considered vulnerable to Democratic challengers.

Four Democrats are competing for the opportunity to take him on in November. Hiral Tipirneni is considered the favorite in the race - and has a significant cash advantage over Schweikert - that also includes 2018 candidate Anita Malik, Karl Gentles and Stephanie Rimmer.