Arrest Made In Fire At Phoenix Democratic Party Headquarters 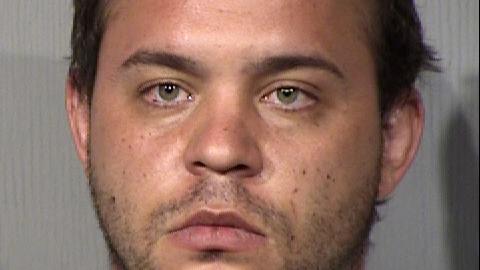 A man has been arrested in connection with the suspected arson of the Arizona Democratic Party headquarters in Phoenix.

Police said Wednesday morning that Matthew Egler, 29, is accused of arson of an occupied structure. Police also released a video of the incident.

ARREST MADE: 29-year-old Matthew Egler has been arrested in connection with the fire set to the Democratic Party Headquarters. The fire happened after midnight on Friday, July 24 near Central and Thomas in Downtown Phoenix. The fire caused substantial damage to the building. pic.twitter.com/6cXhOppySA

Court records say the suspect is a former volunteer who was banned.

A probable cause statement says investigators traced a car seen on surveillance video to a family member of Egler’s, but that he acted alone. The documents say the Peoria resident posted pictures of the fire and said that he bombed the building. The records also say Egler had tried to volunteer with the Maricopa County Democratic Party again this year, but was told no.

County Democratic Party Spokesman Edder Diaz-Martinez says Egler served as a committee precinct person in 2016, but was removed in 2017.

The fire broke out just after 1 a.m. on July 24. Firefighters were able to contain the fire at the building near Central Avenue and Thomas Road.

No one was inside at the time and there were no injuries reported.

"We are deeply saddened and shocked by today's news, but appreciate the swift action by law enforcement to ensure that the suspect is in custody," said Steven Slugocki, chairman of the Maricopa County Democratic Party, in an email statement.

Phoenix Fire Department
Firefighters on the scene of the fire at the Arizona Democratic Party Building on July 24, 2020.