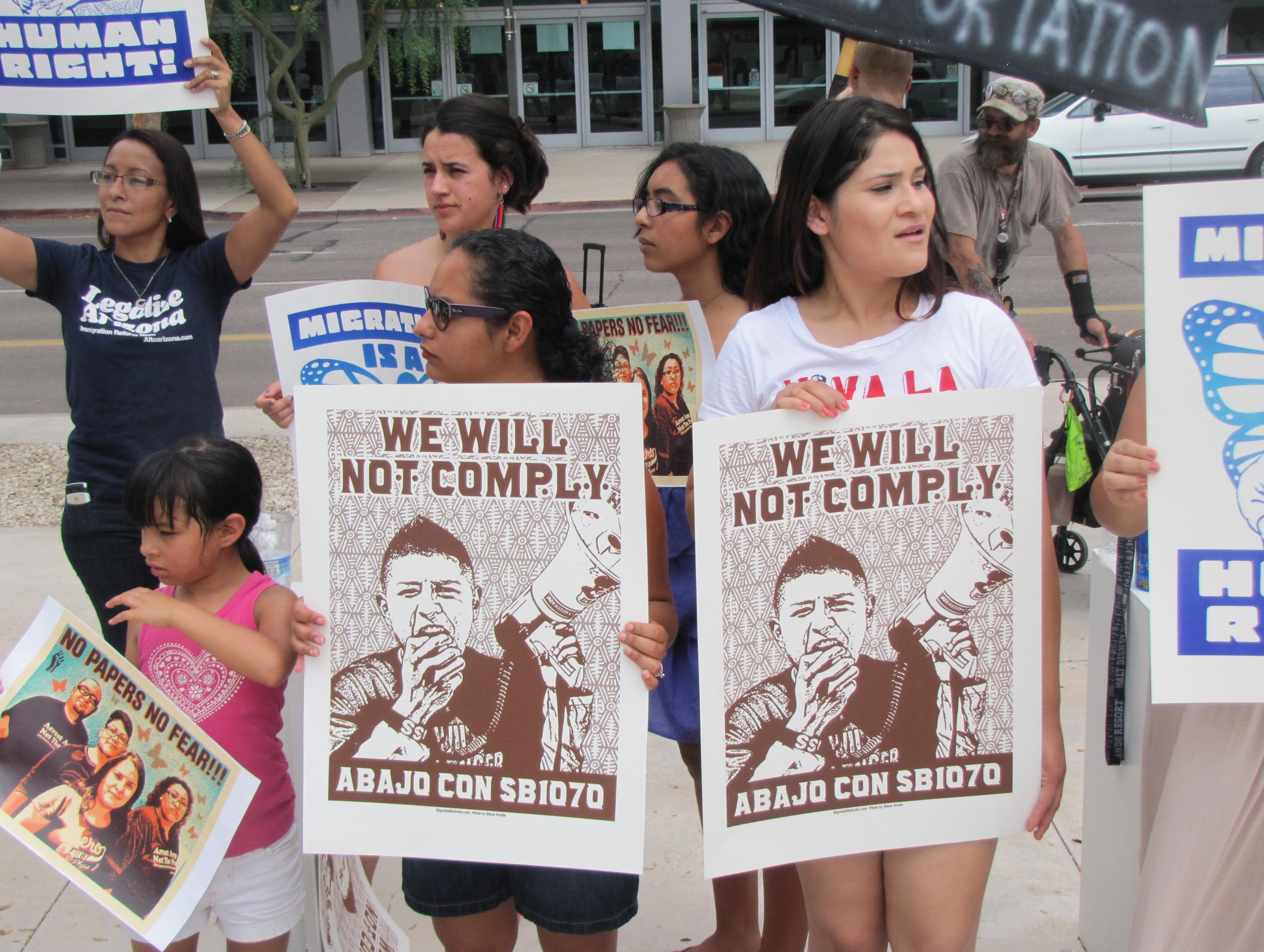 Jude Joffe-Block/KJZZ
Opponents of SB 1070 gathered outside of the federal courthouse in Phoenix on in August 2012.

STEVE GOLDSTEIN: In the decades since Senate Bill 1070 was enacted in Arizona, much of the law has been struck down in the courts. But its legacy lives on in the people and politics of our state. It's a result that was predicted, at least to some extent years earlier. At a 2012 rally to repeal the bill, then Democratic State Senator Steve Gallardo, now a Maricopa County Supervisor, said this:

GOLDSTEIN: That polarization played no small role in shaping the politics of Arizona. And some of the arguments made for and against the law at the time may not sound entirely out of place today. Take this, for example, from former state Senate President Russell Pearce, who sponsored the bill and defended it years later in front of Congress.

RUSSELL PEARCE: Simply put, SB 1070 has clearly worked. And Arizona has acted within its authority. The Supreme Court has held the states can utilize their inherent police powers to enforce immigration laws.

GOLDSTEIN: SB 1070's legacy arguably extends far beyond the borders of Arizona. It played a role in the rise of President Donald Trump and his ideologies around immigration, as well as the progressive movement against him. Now the bill is the focus of a new investigative podcast from the Arizona Republic. I caught up with Yvonne Wingett-Sanchez to talk about rediscovering SB 1070 and its impact today.

YVONNE WINGETT-SANCHEZ: So many of the central players of this debate — Joe Arpaio, Jan Brewer, Russell Pearce — they all really heaped praise on President Trump's immigration policies. And they didn't necessarily say that they mimicked or that he was mimicking what had happened here in Arizona 10 years ago, but that he likely had been paying attention and that his priorities for a border wall and deportation orders were really closely following, you know, something that we had experienced so many years ago. What was also really interesting in, in reporting this was going back and digging up old footage. Podcast, Ronald Hansen found an old interview that Donald Trump did with CNN's Larry King Live five days after Jan Brewer signed 1070 into law.

WINGETT-SANCHEZ: And this came five years before he announced that he was running for president. And it was very clear that he was paying attention to what was going on in Arizona.

GOLDSTEIN: Earlier this year, before the pandemic dramatically changed the legislative session, Gov. Ducey did advocate for a while, at least, a ballot measure calling for a statewide vote on sanctuary cities. Then it was pulled rather quickly, and, and, which was interesting because at the time of SB 1070, there were some who were frustrated the business community didn't speak out. Is that an indication of a change, though? There's a feeling that, "OK, we really don't want to be seen this way again," especially for a bill that really does have any teeth.

WINGETT-SANCHEZ: Yes. I mean, the business community is extremely concerned about this sort of reputation gaining traction again, right? So I think part of the governor's decision to backtrack on this, it was a reflection of that. And this is a community that really found its voice in 1070, or at post-1070, really. When it comes to social issues, you saw them flex it when it came to the religious freedom bill, years later, with SB 1062. And on issues like this today, I mean, they are engaged, they are at the table and they are very concerned about the kind of harm that these sorts of bills and these sorts of policies could have when it comes to attracting businesses, when it comes to trying to, you know, convince folks to invest in this state.

GOLDSTEIN: Younger folks who may have gotten involved in politics, the push to make Arizona purple or perhaps even blue — how much of that came from the roots of SB 1070 and the backlash to that? Were there younger people who decided, "Well, I don't want to leave Arizona, I need to change Arizona, and this is why and this is how I'll try to do it?"

WINGETT-SANCHEZ: So much of that. And this, to me, was one of the, you know, more interesting things to really kind of emerge from this project. I mean, I remember meeting Carlos Garcia when he was a college student in, here in town in Phoenix at a community college, and he was part of a local group, MECHA Group. And I was a young reporter and, you know, just kind of watching his rise and watching him go from a student activist to an immigration activist to, you know, a hardcore SB 1070 activist, and now here he is, a member of the Phoenix City Council. He is, I think, more than anyone in this story, really an emblematic figure of what Democrats and what many Latinos here in Arizona hope you know, their future might be. And to, to follow his progression over the years and to really kind of look back and reflect and hear what he was thinking in real time as all of these issues were really playing out was really interesting.

GOLDSTEIN: What was it like for you to have actually reported on it and then come back to it now? Was it enlightening for you? Was it alarming? What did it feel like?

WINGETT-SANCHEZ: It was both of those things. It was also very emotional because I've been a reporter here for, for 20 years in the state of Arizona. And it was really a culmination, I felt like, of all of my reporting. I mean, I arrived in Arizona as the debate over day laborers was really playing out in the street. And as the city of Phoenix was, was funding this day labor center, and I met some of the very people that we talked to during those debates. So it was a combination of covering a local beat, covering the Latino Affairs beat. As you know, we thought immigration reform was going to happen under George W. Bush and it didn't. I remember protesting, walking in, in the streets with people protesting and covering those, those moments and then covering Maricopa County and Sheriff Joe Arpaio as these, you know, immigration raids and operations were happening, and then covering Jan Brewer and now covering President Trump. I mean, it was really a combination of, of 20 years of reporting in this state. And it is extraordinary when you take a look at it holistically of what that moment and what these conversations that have been happening at a local level for so long have brought us to. And that is such a pivotal election and such a pivotal moment for not just the state, but for the country.

GOLDSTEIN: That is Yvonne Wingett-Sanchez, national political reporter for the Arizona Republic. We were talking about the new investigative podcast from the Republic, "Rediscovering: SB 1070." Yvonne, thanks so much for the time and good luck.

WINGETT-SANCHEZ: Thank you so much, Steve. I appreciate it.

How a so-called party drug has become an accessible option for depression.