STEVE GOLDSTEIN: During the months of the COVID-19 pandemic, most of us have become much more conscious of what is around us, from droplets we barely see to coughs and sneezes around us. Who isn't wearing a mask? Is that person 6 feet away from me? It's no surprise that our surroundings include things that can make us sick, including pesticides sprayed on our food. Many of us don't have immediate reactions, though, and if illnesses emerge, that may happen decades later. For those who suffer from environmental illnesses (EIs), though, the impact can be felt almost immediately and worsen as time goes by. In his new book, "The Sensitives," Oliver Broudy writes about people with environmental illnesses and speaks with some who live in Snowflake, Arizona. And Broudy is with me to talk about that. Oliver, there's been disbelief among many people when it comes to certain aspects of environmental illnesses. What made you actually believe it was real and then something you wanted to write about? 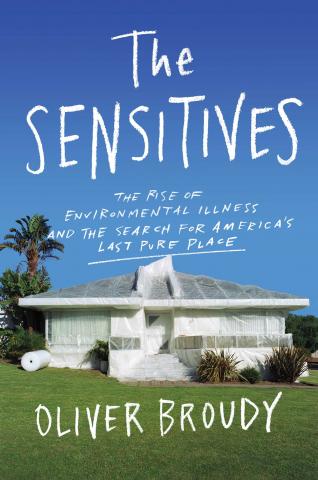 Simon & Schuster
"The Sensitives: The Rise of Environmental Illness and the Search for America's Last Pure Place" by Oliver Broudy.

OLIVER BROUDY: First of all, I could relate, and I think we all can on some level because we all live in these environments where we can never be entirely sure how safe we are. You know, like I feel like I'm daily panged with little warnings about 'There's antifreeze in whiskey,' or asbestos in crayons or glyphosate in the Cheerios. And I think I'd reached a point where I was noticing all of these little warnings and realizing that despite hearing all of this stuff, I really didn't have any way to put it together and no kind of comprehensive way to understand what my risk was. From the day we're born, we are each of us assembling some kind of calculator to figure out what our risk is and whether one risk is greater than another. And I felt that we had reached a point where that mechanism, that really sophisticated mechanism was really kind of failing me. Then I suddenly encountered these people who are basically taking all of these risks that I can't quantify very literally.

GOLDSTEIN: Without asking you for a laundry list, what are some of the more common ways that people think of where EI can affect any of us?

BROUDY: Well, usually environmental illnesses is brought about either by one sudden exposure to some kind of chemical toxin or a series, a longer series of exposures that reaches some kind of tipping point. And it could be something in the workplace. It could be an industrial solvent. And, you know, once you contract the disease, the way that it usually plays out is you might find yourself a little bit sensitive to start with two particular chemicals, you know, maybe it's just perfume. There's a lot of people without even really thinking of themselves as being environmentally sensitive, don't like perfume — feel distracted by it. But it tends to grow, and this is one of the really defining characteristics of EI is that it tends to spread. And so you start off being sensitive to one thing and the list of things that you're less able to tolerate gets longer and longer until finally, if this goes all the way to the end, you find yourself living out in the middle of nowhere just to have a safe place for you to set yourself to live.

GOLDSTEIN: Well, and one of the reasons I wanted to talk with you is that one of those places in the middle of nowhere is Snowflake, Arizona. When you arrived in Snowflake, I mean, you knew of it, that's why you went there. But what did it initially feel like when you actually arrived there and you first met some folks there?

BROUDY: Well, I mean, first of all, I have to admit that as compassionate as I tried to be in my approach this book, I do admit that there was a kind of, a little bit of a gawking impulse going on, which I couldn't help. Not many of us can help. We're interested in people who are different from us. And I think that part of the reason that we're interested is because, that we fear on some subconscious level that we may actually be like them. And you could see a lot of this playing out with the way people are responding to preppers. As little as five years ago, they used to be regarded as total freaks. And now people are thinking, "Well, jeez, maybe they might be onto something." So in a way, I think that we use these people on a kind of subconscious way to play out potential realities for ourselves. So part of my attraction to Snowflake in particular, which is sort of a nexus for these people, was to just kind of gawk and to see, to imagine what it would be like to live there, to imagine if I could end up living there myself one day. I think particularly in the era of COVID, where we're all isolated and isolating ourselves, this has become far more imaginable. As for Snowflake itself, it's a normal little town. The EI community is on the outskirts of that town, and it is just empty. It looks like — there's stumps of trees every now and then that look like they've been struck by lightning. So there's nothing there. And that's kind of the beauty of the place for the people who live. It's 6,000 feet above sea level, the air is dry, sparse vegetation, no pollution. There's nothing there, and that's what makes it a desirable place for these folks to be.

GOLDSTEIN: These initial folks you met in Snowflake, did they believe that you might portray them as kooks? How did you gain their trust if in fact, that's what we describe it as?

BROUDY: They they were not very trustworthy at all. They didn't believe me, and they didn't believe me in kind of a mirror reciprocal way that they were themselves not believed by the medical establishment. So you have to understand you're dealing with people who, first of all, are experiencing profound, I like to think almost existential level of suffering. And at the same time, this suffering is not being accorded any kind of clinical legitimacy simply because we haven't figured out how to understand this thing yet. So medicine can be very conservative in this respect. If it's not understood already, it doesn't exist. So there is this kind of active epistemological violence that was committed against these folks. When I went up to meet them, I felt kind of the mirror version of it, like, "Why should we trust you?" I certainly wasn't the first brush with the media that they'd had before. They've had magazine people through there before, and they've been burned. So I had to win their trust over. And you asked how I did that. I just sort of put it all out on the table and put my heart on my sleeve and kind of hoped that they would give me a break, and I feel very lucky that they did so. And part of the compassion that I try to bring to this book is a way of saying thanks and paying back that compassionate that they showed me.

GOLDSTEIN: "The Sensitives" comes out at a time — obviously, we've been in the midst of this pandemic for months. How much do you think a book like this is going to strike people in a more obvious way between the eyes because of what we're seeing with the pandemic now?

BROUDY: I think that the pandemic has done a lot to sort of remind us how unimaginative we are as people. We tend to kind of float along and not imagine that things can get worse until they do. Our understanding of how risk works has changed in very clear ways over the decades. Also, the nature of risks themselves have changed. And COVID is a great example. There's one writer that I lean on heavily in the book, this guy, Ulrich Beck, who wrote this book in 1992 called "Risk Society." And his argument is that risks have changed in this fundamental way, where before they were kind of closed, now they're open-ended. And before they were quantifiable, now they're unquantifiable. He was talking about Chernobyl when he said that the injured of Chernobyl today have not even been born. The chemical risk and COVID are alike in this sense. And we have accommodated this change of risk without really stopping to ask whether we should or whether we want to live differently.

GOLDSTEIN: That is Oliver Broudy, he's the author of "The Sensitives: The Rise of Environmental Illness and the Search for America's Last Pure Place." Oliver, thanks so much for the time today.