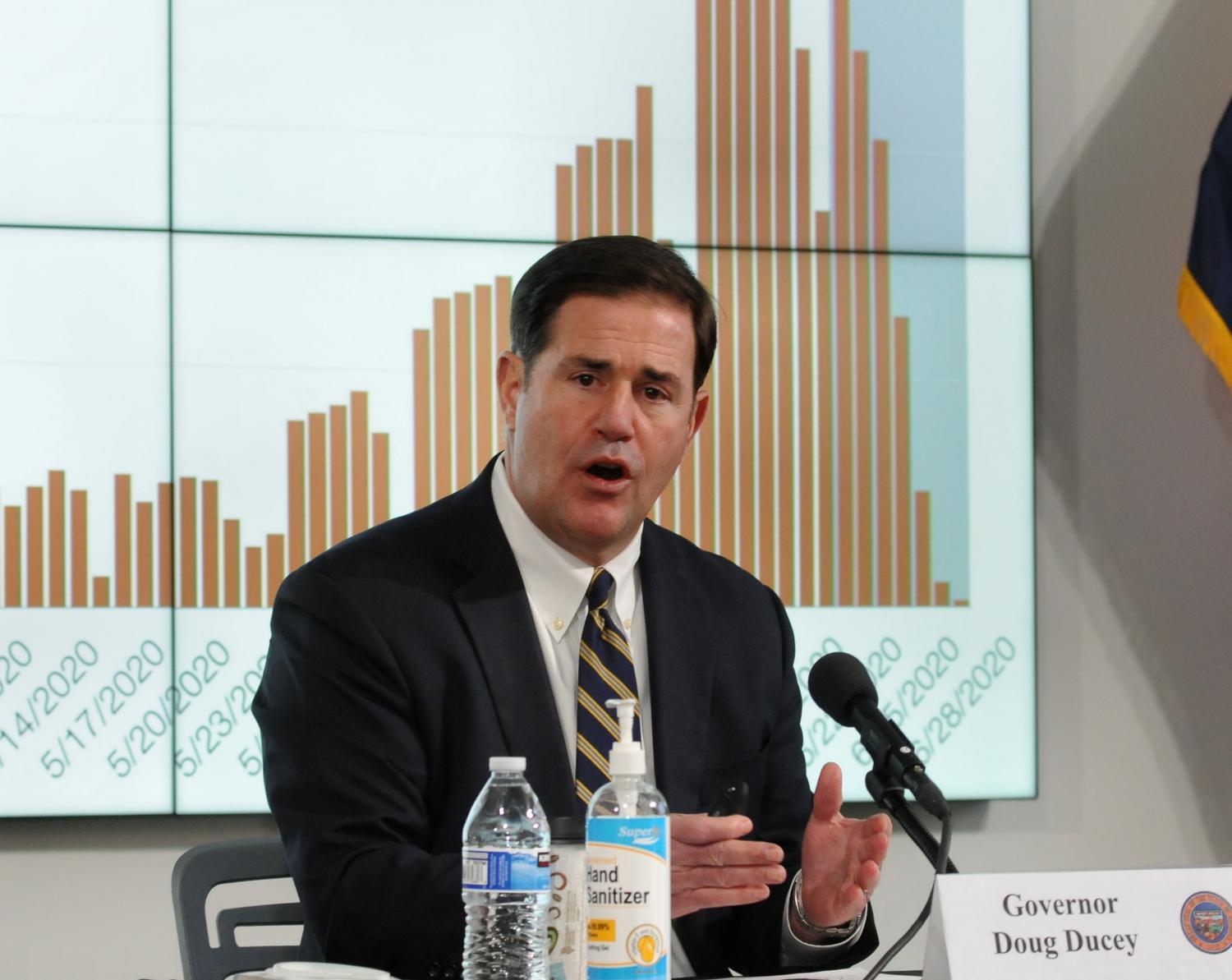 Howard Fischer/Capitol Media Services
Gov. Doug Ducey explains his decision on June 29, 2020, to once again close bars and restrict other activities amid a spike in COVID-19 infections.

In an effort to stop a massive surge in new coronavirus cases, Arizona Gov. Doug Ducey ordered bars, nightclubs, gyms, movie theaters and water parks around the state to be closed for at least 30 days starting Monday night.

The Republican governor also ordered public schools to delay the start of the classes at least until Aug. 17.

Many districts planned to start the school year in late July or early August.

Both orders could be extended if the number of new virus cases doesn’t ebb.

Most Arizona bars and nightclubs opened after Ducey’s stay-at-home and business closure orders were allowed to expire in mid-May.

Arizona health officials reported 3,858 more confirmed coronavirus cases Sunday, the most reported in a single day in the state so far and the seventh time in the last 10 days that daily cases surpassed the 3,000 mark.

Since the pandemic began, 74,500 cases and 1,588 deaths stemming from the virus have been reported in Arizona.

Hospitals around the state have begun activating surge plans to increase their capacity to treat coronavirus patients as confirmed cases rise and more people seek treatment.

Bars that don’t serve food were not allowed to re-open, but scenes of packed clubs that used that loophole to return to business as usual were common.

Pools at hotels and motels and municipal pools are also being ordered to close, as is a popular tubing location on the Salt River east of metro Phoenix.

If the closure order isn’t extended and nightclubs, pools and other gathering spots are allowed to reopen July 27, local health officials and law enforcement will be able to enforce strict social distancing and patron count rules.

Private pools at apartment complexes can remain open, but they must limit gatherings to no more than 10 people and post signs of the limitations.

The governor is also re-establishing a ban on gatherings of more than 50 people, and the state liquor department is ending the issuance of special-use alcohol permits. Cities or counties could issue their own permits only if they ensure special rules are followed.

Most movie theaters remain closed, but the order closes those that re-opened and prevents others from reopening.

Under the order, Aug. 17 is now the earliest that students will be able to physically return to schools in Arizona. The delay is part of a series of actions by the governor to slow the spread of COVID-19 in the state.

Ducey said the August date is aspirational and can be pushed back if conditions don’t improve as it gets closer.

“We are working closely with Superintendent Hoffman with the objective to educate our children safely and successfully," he said during a Monday press conference.

The order allows schools to begin their school year with distance learning before Aug. 17 if they chose.

"If we have to do distance learning again, it's not optimal but it's something we certainly got much better at on the turn of a dime last time," he said.

Joe Thomas, president of the Arizona Education Association, said Ducey's decision to delay the first day of in-person instruction is smart. It gives districts more time to figure things out and it means teachers and students won’t put themselves at risk while the state’s upward COVID-19 trajectory continues. He thinks Arizona has to address this health crisis before it can think about reopening schools in a safe manner.

"If nothing changes, it won’t have mattered what we did today," Thomas said. "We must change our behaviors around the state and we have to understand that this is a health crisis that’s causing a crisis in education. We have to take care of the health crisis first, then we can educate students to the best of our abilities."

Ducey continued to encourage Arizonans to wear masks at a press conference on Monday. He said the state would make masks available for at-risk populations, including people living and working in state prisons.

“Every one of our correctional facilities, from correctional officers, to inmates, will have a mask. And our inmates upon release are given two masks," he said.

Ducey said inmates would have access to masks by the end of the week. Incarcerated people have been sewing masks for Department of Corrections staff for months, but until recently, have not been allowed to wear them.

The state Department of Health Services activated crisis standards of care for hospitals and paramedics on Monday. The decision came at the request of Arizona’s Disaster Medical Advisory Committee, which on Friday asked the department to activate the emergency standards.

Those are essentially triage protocols that give hospitals more freedom to decide how to care for those with COVID-19. Ann-Marie Alameddin, president and CEO of the Arizona Hospital and Healthcare Association, said that the most critically ill patients are put through a scoring system.

That system takes into account a patient’s age and possible medical outcomes — for instance, whether a patient will develop multiple organ failures.

“If they are likely to die in the next year or so they are scored accordingly,” Alameddin said. “And then they try to focus resources on those patients who have the highest likelihood of recovery.”

Will Humble, the state’s former health director, said the first goal of any hospital in the crisis plan is to avoid needing to use it.

But Humble said the fact that the state health department activated the plan underscores the seriousness of rising hospitalizations for COVID-19.

“I think it was a really important move today to actually validate the fact that that’s how close we are. And in fact, in some hospitals, perhaps we’re already there,” Humble said.

In addition to giving hospitals a template for prioritizing which patients get treated, activating crisis standards also gives hospitals some protection from liability for providing less than their usual standard of care.

For more on Ducey's actions to slow the spread of coronavirus in Arizona, The Show talked to Howard Fischer of Capitol Media Services.