Keith Haring Painting Made During Phoenix Visit Sells For $75,000 At Auction 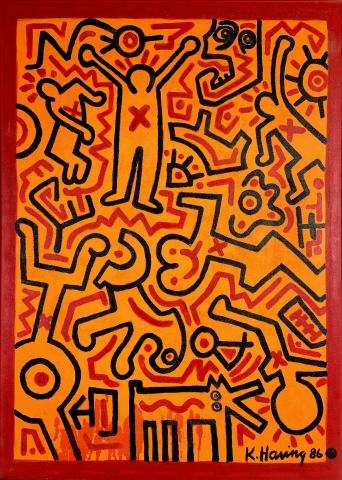 MARK BRODIE: A painting made by acclaimed pop artist Keith Haring sold at auction in the Valley late last week for $75,000. Haring did the painting while in Phoenix in 1986. The visit included a drawing workshop at the Phoenix Art Museum, and Haring teaming up with students from South Mountain High School to paint a mural on Central Avenue and Adams in downtown Phoenix.

The latter project came together quickly, with Haring deciding he wanted to work with the students after he got here. That led to some hastily-called meetings between the school, city, artist and museum. Then-South Mountain art teacher and art museum educational trustee Mike Prepsky helped make those happen. He picks up the story on the morning work on the mural started.

MIKE PREPSKY: So our painting teacher, myself, our principal. We all arrived by bus on that corner, it was all cordoned off. And the space was 12 feet by 150 feet. So he said, "Listen, I need a two hour head start." So the kids were just sitting there and watching Keith go up and down a ladder for two hours and then he turned, turned the kids loose and off we went on producing the mural.

PREPSKY: Well, the mural, there was no preliminary drawing. He was up and down the ladder producing it with a small container of black paint and a 2-inch brush. And it looked a lot like many of the kind of doodle-like characters that he was creating at that time. You know, he had a series of buttons that he produced that he gave away. And on those buttons were these, these characters, these, these Keith Haring characters. And that's what was incorporated into this mural. I believe that this is just something of his great gift that he was able to do it in such a, such an impromptu, spontaneous way. I think that was part of this great gift.

BRODIE: What was the reaction of Phoenicians to this mural at the time? You know, obviously there are a bunch of murals in downtown and around the city now, but not so much at that time.

PREPSKY: In fact, one of the things that Keith said to me was, "Where's the graffiti here?" And we were just, we were really a little bit behind the curve on that notion. But honestly, you know, he was kind of a catalyst. He had a following. The kids knew who he was. And a video was produced. It was called Keith, 'Keith and Kids.' And in that video at the very end, he's passing out these, some of these buttons to the kids, and you could see the expression on their faces. They grabbed and squeezed that button that they had part of this guy. He's like a rock star, you know? He had a persona. He had a persona about him that was unique and special. He knew how to connect, and he knew how to connect with kids.

BRODIE: Now the mural is no longer up. Do we know what happened to it and if any of it still survives?

PREPSKY: Mark, this is one of the mysteries of this whole thing. After the mural was finished on Thursday, we made arrangements for, for Keith and people from the art museum and city people to come and have a pizza party in my classroom. Documents needed to be signed with arrangements with the city. A document was signed in my classroom that that mural was to only be up for one year at the end of that time. And that's, the building was supposed to be razed after a year, so there was going to be no problem here, but that the razing didn't take place, nor with — was the mural taken down. So now, some years later, the mural had been taken down and the city wanted to divide that up between the city itself, South Mountain and Phoenix Art Museum to put it on auction. We could do whatever we wanted with our third. But the city wanted to sell theirs for, for money. And it was a kind of an outrageous point of view because the document that was signed in my classroom was, it was supposed to be taken down and destroyed. And Keith said, "That's not what I want." So Keith said, "No, I want the whole mural to go to South Mountain." So that was settled in that conversation. Then I made arrangements with the city to go see the panels. And unfortunately, over that period of time, the mural had been tagged. It was dirty. It was never intended to be up, and the paint was basically flaking off of it. So I said to the person that showed me those panels that I'd rather follow Keith's initial point of view, and this mural needs to be destroyed. And that's the mystery of it Mark, is because I left it like that. And there's been, you know, conspiracy theories and something like it's still out there somewhere. And, you know, frankly, it could be, but I don't believe it.

BRODIE: So when you heard about this auction of this, this drawing that he made during that visit to Phoenix in 1986, I would imagine that brought back a lot of memories for you of that visit and everything that happened.

PREPSKY: Oh, it really did. Now, I can't claim to be an expert on Keith, but I know a lot about him and his work. And the intriguing part about it is that there was a statement on the back of the painting that if I could kind of paraphrase it, it was to a person by the name of Chris. And he said, "I hope that you like my doodles." I really tried to find out who Chris was. I knew a lot of the people that worked at the Phoenix Art Museum at that time. And I don't say that I knew what Keith did minute for minute. Obviously not. But I had a good idea for what he did for, for most of the time that he was here. The painting was given as a gift to Chris, who passed away and his partner had it, who then gifted it to the person who's selling it.

BRODIE: Given the time of this visit, I'm wondering what somebody like Keith Haring coming to Phoenix in the mid-'80s meant for the city's art scene and maybe how it helped Phoenix's art scene evolve and grow a little bit?

BRODIE: Mike Prepsky is a retired art teacher at South Mountain High School. We were talking about famed artist Keith Haring's trip to Phoenix in 1986.