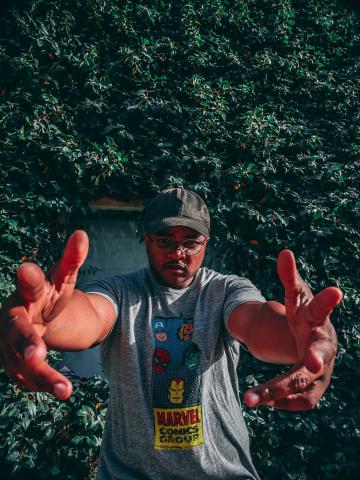 MARK BRODIE: Phoenix and other Valley cities have seen a number of protests since the killing of George Floyd in Minneapolis last month. One of the groups that's been involved in them is called the W.E. Rising Project, which says it's a movement creating systemic change through peaceful protests. That group includes Phoenix-based hip-hop artist RoQy TyRaiD, who's written songs about racial injustice. I spoke with TyRaiD recently and asked what his role has been in the Phoenix protests and what spurred him to become as involved as he has been.

ROQY TYRAID: I initially fell back into this line of activism after, during the first day of protests, seeing younger individuals out there who didn't necessarily know how to take care of themselves in those specific circumstances. And from there, just due to my history of being involved in these type of demonstrations and of course, in all the years of emceeing, I was, I found myself helping organize these scenarios.

BRODIE: What has led you to join these kinds of protests?

TYRAID: I just feel compelled as a black man in America to utilize, my God-given voice, the talents that I have built over the years to help push for an America where we are truly deemed as equal. As human beings. So I just feel spiritually driven towards this line of work.

BRODIE: What have you seen when you've been protesting?

TYRAID: Wow. Initially, the first few days were pretty hectic. There's a lot of pressure, a lot of confusion, a lot of frustration. But, you know, as the days progressed and things started to become a little more organized, you know, just nonviolent demonstrations, just people utilizing their voice in unison and demanding accountability for those who are sworn to protect us. And in terms of the visual aspect of it, it's pretty diverse. You see all walks of life, races, religions, orientations, complexions, cultures, races. It's, it's beautiful. You really see Phoenix out there in its best form.

TYRAID: Oh, not at all. My very first memory is Public Enemy's 'Fight The Power' on MTV. It's the first thing I remember. I mean, for those who find themselves a little, consider themselves universal, I'm born the same day as Malcolm X, so.

TYRAID: Sometimes the writing is on the wall.

TYRAID: Oh, absolutely. Art imitates life and the other way around. You know, life is led by rhythm. Your heartbeat has, is, is a rhythm in itself. So it isn't unfair to say that there is a little bit of a reciprocity between the relationship of music and the day-to-day lifestyles that people end up speaking about.

TYRAID: Oh, Hip-Hop or music could be the most inspirational tool. Music is very revolutionary. You know, when, in the right atmosphere. So they go hand-in-hand. Most certainly.

TYRAID: Understanding the culture and social structure of Phoenix, utilizing that to our benefit. One of the things that we talk about heavy in our demonstrations is our white colleagues utilizing their privilege in terms of educating others who may not look at us with a level of respect that is required to, you know, feel empathetic. So in terms of seeing change in Phoenix, a level, just experience .An equal experience for all Phoenicians, just an opportunity for people to have the exact same experience.

BRODIE: How optimistic are you that'll happen?

TYRAID: I'm completely optimistic. These last three weeks have shown that all it takes is unity and determination and consistency. And, you know, we can bring about the change that we are looking for. And this is bigger than a hashtag. It's bigger than a moment. It is legitimately a movement. And Phoenix is leading the way. We are the fifth largest city in America, and I honestly believe that this is setting a new standard.

TYRAID: The types of conversations, again, going back to the controversial subject of white privilege — what it means and how it could be utilized, and in a sense, weaponized to bring about the change that we're all looking for. You know, empathy is a human experience. So to bring people into your world and show them the experiences that you have, and for them to take that on emotionally, mentally, and to take that experience and disseminate it to their, their circle of friends and family. Those have been the types of conversations that I don't believe we were able to have before.

BRODIE: What kinds of reactions from white people do you get when you have those kinds of conversations with them?

TYRAID: Empathy and understanding, you know, actual allies, you know. We really feel that unity, unity is an understatement. If you look at those pictures that you see online and on social media platforms, it's a literal rainbow of different colors, different views. And that's emblematic of Arizona as a whole.

BRODIE: Do you have any new songs or new lyrics swirling in your head or that you've even put pen to paper based on what you've seen and heard over the past few weeks?

TYRAID: I'm always inspired. I'm always inspired. And I'll always continue to be an artist first and foremost. But right now, I just feel called to action like a lot of other individuals, a lot of other artists. You know, as the momentum shifts into other directions, you know, we'll be able to reflect and create something that captures that moment in music format. But right now, I really feel that we have a much larger task at hand as you know, people in the city of Phoenix, we're doing a really good job. And I would like to express my gratitude for every single citizen of this city who has taken the time out of their day to join with us, meet with us, help strategize and how we can make this a better Arizona for all citizens.

BRODIE: All right, RoQy TyRaiD. Thanks a lot for taking the time to chat. I appreciate it. Be well.

BRODIE: RoQy TyRaiD is a hip-hop musician based in Phoenix. He's also part of the W.E. Rising project here.