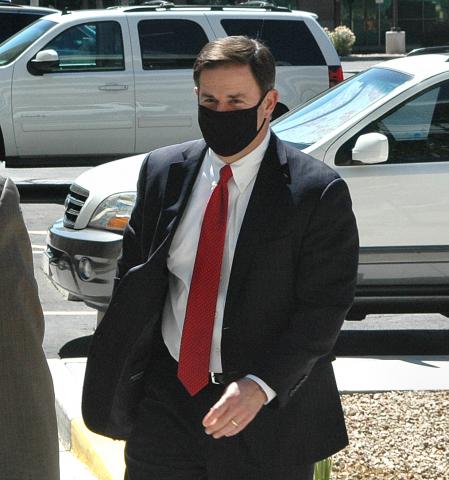 Howard Fischer/Capitol Media Services
Gov. Doug Ducey arrives at press conference June 17, 2020, wearing a mask, the first time he has done that since declaring a state of emergency over COVID-19 since March.

In an abrupt about-face, Gov. Doug Ducey on Wednesday agreed to give city, town and county officials the power to enact and enforce requirements for people to wear face masks.

The move comes six days after Arizona Department of Health Services Director Cara Christ acknowledged there have been "hot spots,'' places in Arizona where COVID-19 has spread quicker than elsewhere.

But the governor at that time rejected the possibility of giving local officials the option of imposing their own restrictions, saying he wants a statewide standard to "reduce confusion.''

On Wednesday, however, Ducey cited those same hot spots as a reason to provide local control.

In the same press conference, the governor also:

Ducey also separately encouraged what he believes is more responsible behavior, saying that there appears to be a spike in cases spread by people having parties in their homes, including graduation ceremonies. If nothing else, he said, anyone who was at one of those parties who contracts the virus should call everyone else who was there so they can get tested.

On one hand, the governor said it's not such a big change.

"Masks has been in our guidance since the Centers for Disease Control put that forward in April,'' Ducey said. "I've said I am in favor of masks.''

Yet it was not until Wednesday that both Ducey and Christ showed up at the weekly briefings wearing masks. And it was not until Wednesday that Ducey agreed to remove a provision from his earlier proclamations and executive orders prohibiting local officials from imposing health requirements any stricter than what the state allowed -- including a mandate for the use of masks.

Part of what changed is the governor's concession that the situation is getting worse.

For weeks Ducey wrote off increases in the number of people testing positive for the coronavirus as simply a function of increased testing. On Wednesday he said that there's more to it than that.

"We have increased cases in addition,'' the governor said.

Ducey also said he was swayed by written pleas from border area elected officials who have seen large increases in cases since the governor rescinded his restrictions on business activity and travel weeks ago.

"The reality is that since the state relaxed the stay-at-home executive order, many residents have interpreted this to mean that the danger is over,'' they wrote.

One solution, they told Ducey, was to allow them to impose requirements for people to wear masks when they are in public and cannot remain at least six feet from each other.

But it hasn't been just the border cities and counties who have been pressuring the governor.

The move comes days after what is now more than 900 medical professionals signing a letter to the governor asking him to issue a statewide mandate requiring anyone age 2 and older to wear a mask. They cited the lack of a vaccine or proven treatment, saying that the disease is just as contagious now as it was when he implemented his stay-at-home directive.

"There is sufficient, clear, scientific evidence that wearing masks is one way to decrease the spread of COVID-19 and thus would reduce both the wave of severely affected patients requiring ICU and ventilator resources as well as unnecessary deaths,'' they wrote.

And Ducey faced the possibility that some cities would force the issue by enacting their own ordinances, with or without the governor's blessing.

Earlier Wednesday, Tucson Mayor Regina Romero said she has directed the city attorney to amend the existing local proclamation to require that people wear masks in public -- regardless of what the governor says.

"This is the moment in time where we have to decide,'' she told Capitol Media Services. "Every day we wait means lives.''

And Councilman Steve Kozachik cited a provision of the city charter giving the council "to make all regulations which may be necessary or expedient for the preservation of the health and the suppression of disease,'' saying that exists with or without Ducey's permission.

Romero said she will be signing the proclamation Thursday.

The governor's decision dumps the issue into the hands of local officials who can proceed several ways.

One would be by proclamation, something that could be done by the mayor or chair of the supervisors. There also is the possibility of enacting ordinances.

That latter course has certain advantages, including providing for penalties for those who do not obey. Ducey said he is leaving that up to each jurisdiction.

Pima County supervisors will meet Friday to discuss what actions, if any, to take now that Ducey has granted more authority.

One consideration is that an ordinance adopted under the county's health powers also likely would have the force of law throughout the county, including within incorporated cities; a proclamation might affect only unincorporated areas.

That distinction is important.

In Scottsdale, Mayor Jim Lane said he was not considering any sort of mask directive while Mesa Mayor John Giles said he will issue some sort of directive next week but did not provide details.