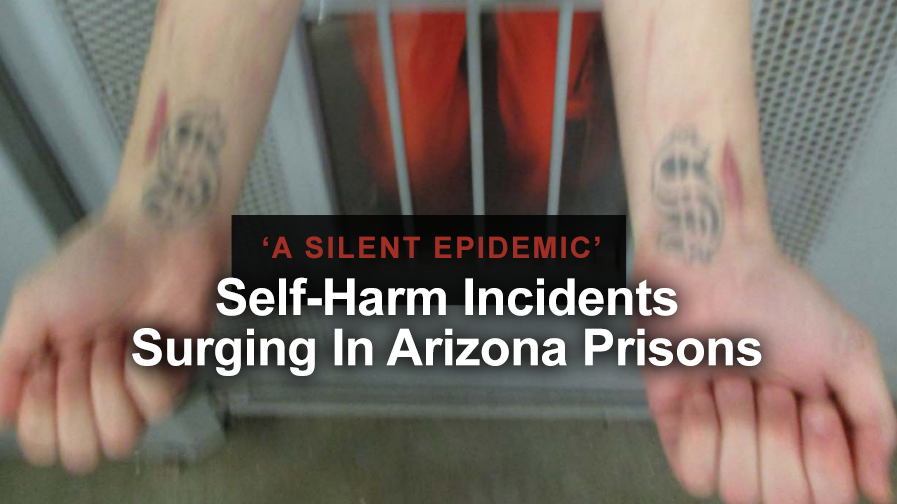 Dustin Brislan’s arms are covered with scars. They are physical manifestations of his internal struggle with mental health issues.

“I’m a cutter. I cut veins and arteries — so I just start cutting,” Brislan said.

Incarcerated in Arizona prisons for much of the past 20 years, Brislan hasn’t always had access to the mental health care he needs. In the absence of proper treatment, alone in his cell, he repeatedly committed acts of self-harm.

“Like if I’m having a bad day or I’m real emotional, then I will cut myself,” he said. “It could be out of anger.”

The number of cuttings reported in Arizona prisons has increased from 181 in 2015 to 1,040 in 2019. The ADC website defines cuttings as “Inflicting cuts, burns, or bites to the skin surface. This would include any level of lethality (superficial, moderate, serious, etc.).”

Hangings have increased annually from 51 to 183 in the same time period. Incidents of self-harm described by the Department as “blunt force,” which can include an inmate banging their head repeatedly into a wall, increased from 124 in 2015 to 299 in 2019.

The Department of Corrections website describes the “overdose” category included in self-harm data as “Overdose/Ingestion/Insertion: Ingesting, inserting of substances (drugs/medications/non-edible items, etc.) or foreign bodies.” The agency did not respond to detailed questions regarding how this kind of self-harm is defined or diagnosed.

KJZZ has been seeking information from the Arizona Department of Corrections on this story since October 2018. The agency has not responded to any of the multiple requests for comment on incidents of self-harm in Arizona prisons or questions about methodology and diagnostic procedures. Centurion Health, the state’s contractor for prison health care, did not respond to a request for comment on this story.

The Arizona Department of Corrections has not updated the inmate self-harm and mortality data on its website since January 2020.

For many years, Brislan says Arizona prison health care officials misdiagnosed him, improperly medicated him and left him alone to spiral into further depression.

When he would respond by cutting himself, Brislan says the Department of Corrections would discipline him.

“They would spray me with their chemical agents and then drag me to medical with spray all over my body,” he said.

Brislan says getting the proper medication has been a struggle for years. He says certain drugs that worked well for him in the past are not approved by Centurion Managed Care, the private health care contractor in Arizona state prisons.

Brislan said he believes seriously mentally ill patients are being denied medications because the health care contractor is “trying to cut corners and save money.”

A Spike In Numbers And Change Of Reporting Methods

In October 2018, after a sharp increase in self-harm incidents, the Arizona Department of Corrections changed the way it reports on the incidents, breaking down the data into two categories: “Self-Injurious Behavior” and “Suicide Attempt.”

The Department said the distinction would allow it “to better understand these incidents and continue to refine prevention techniques.”

Brislan says after he would commit self-harm, ADC officials rarely talked to him about it.

“Mostly what they do is, without saying anything, they have my wound dressed and then they would haul me off to suicide watch,” Brislan said “And I would sit on suicide watch for weeks or possibly even months.”

Brislan says many of the prison health care workers do not have the training to recognize the difference between a suicide attempt and an act of self-harm.

Dr. Yazhini Srivathsal is a psychiatrist at the Banner Behavioral Health Hospital in Scottsdale. She says there can be many reasons why people participate in self destructive behavior. Srivathsal says some patients who harm themselves are trying to alleviate pain.

“Let’s say, you cut,” Srivathsal says. “What happens is that the pain immediately releases some endorphins. You immediately feel a pleasure, a sense of calmness, a relief. So that’s what makes people want to do it over and over again.”

Srivathsal says others who self-harm may be feeling numb. “You want to feel something, so then you cut, because it brings you back to reality. It makes you feel something else, other than the blankness,” she said.

Srivathsal says if self-harm is not properly diagnosed and treated, the behavior can lead to an increased risk of suicide.

“When somebody is trying to hurt themselves, over and over again, it’s easy for them to go through the pain because they’ve practiced so many times,” she said. “The self-injurious behaviors will increase the capacity to act on the desire when suicidal thoughts happen.”

Lindsay Hayes, project director of the National Center On Institutions And Alternatives, specializes in suicide prevention in correctional facilities around the country. He says the distinction the Arizona Department of Corrections is attempting to make between self-harm and suicide attempts is consistent with best practices in corrections.

“It is important to differentiate, not only the types of behavior and the intent of the individual, but the severity or the lethality of the behavior so that you can, if necessary, take corrective action,” Hayes said.

He said it is not realistically possible for a prison system to thoroughly investigate every instance of self-harm, but they should attempt to speak with as many inmates displaying the behavior as possible.

Hayes says it’s especially important to identify and treat self destructive behavior in a correctional setting. He says the dramatic increase in incidents of self-harm in Arizona prisons prompts several questions.

“Why are the numbers going up? Is it the way they’re defining it? Is there something else going on? Oftentimes when self-injurious behaviors increase, it’s because there is a lack of staffing,” Hayes said, “whether it is mental health workers, nurses, or correctional officers.”

According to a staffing report from February 2020, there were 128 unfilled positions in the Arizona prison health care system out of a total of 1,052 positions guaranteed by Centurion Managed Care's contract with the Department of Corrections.

The number of inmate suicides reported by ADC has remained relatively flat in recent years averaging between six and eight annually.

Since ADC starting keep track in October of 2018, suicide attempts have fluctuated between four or five each month to as many as 20.

The Arizona Department of Corrections also keeps a tally of what it calls “Accidental Deaths,” which have dramatically increased over the past four years. The Department did not answer specific questions about how these deaths are categorized and what makes them “accidental.”

“It is a sign that something is causing people to be in so much pain, to be so desperate, that they are trying to injure or kill themselves,” Fathi said. “And so that is a very significant and very disturbing indicator.”

Fathi says there needs to be a proactive system in place in Arizona prisons to address what he called “a silent epidemic.”

“There have to be efforts to identify people who are at elevated risk of self-harm and suicide and that starts with intake,” Fathi said. “And then you need to follow these people to monitor their state of mind and make sure they don’t end up in crisis where they are likely to injure or kill themselves.”

“The shortage of qualified mental health staff in the Arizona prisons is certainly partly to blame,” Fathi said. “I think another reason we are seeing this is a problem of attitude. Arizona has consistently had a higher than average rate of suicides in its prisons. And yet, what we’ve consistently seen in Arizona, is a tendency to minimize the problem of self-harm and suicide.”

Fathi says when mental health staff do follow up with inmates exhibiting self-destructive behavior, many of the encounters are as short as two minutes.

“Many of them take place at the cell-front with the clinician standing outside the cell, talking to the patient where there is no privacy,” Fathi said. “So we’re developing more and more evidence that it really is an exercise in box-checking rather than a serious attempt to treat someone who was in so much desperation and so much pain that they tried to harm or kill themselves.”

After becoming a named plaintiff in an Arizona prison health care lawsuit, Dustin Brislan says he’s been put on more effective medication and he’s received greater access to therapy. He has one-on-one counseling every week when most other inmates can only see a therapist once a month.

Brislan hasn’t cut himself in more than a year, and he’s been inspired to channel his emotions into healthy outlets like drawing.

Now Brislan says he has no desire to die and he looks forward to getting out one day. He says other inmates with mental health issues should have access to more frequent therapy as well.

“They build up all kinds of emotions and everything and they just sit on it for a whole month and a lot of times they’ll just go off or start cutting and whatnot,” he said.

Brislan says he has finally been able to speak about abuse he experienced in his life and understand how it impacted him through behavioral therapy sessions in the prison.

“Had I known what was wrong, when I first started exhibiting mental health symptoms, I don’t even think I’d be in prison,” Brislan said. “Had I got the treatment back then, I don’t think I’d be sitting here right now.”