The National Guard Flew A Spy Plane Over Phoenix Protests. Here's What We Know 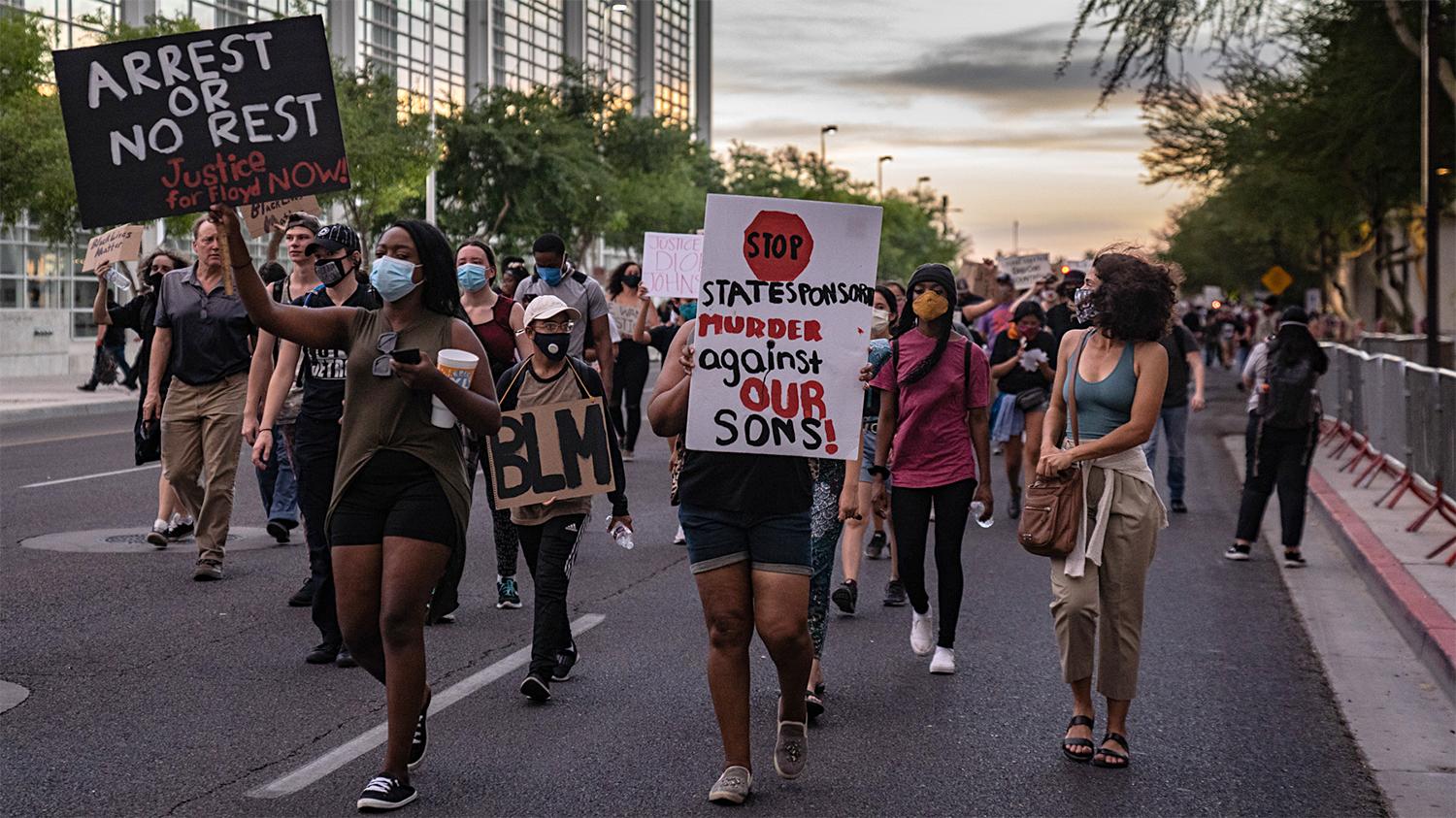 Aung N. Soe/Special for Cronkite News
Protesters march toward Phoenix City Hall from the Arizona Capitol on Saturday, May 30, 2020.

LAUREN GILGER: Protests continued in the Valley over the weekend. Yesterday marked the 18th straight day we've seen crowds gather in downtown Phoenix and in cities across the Valley to protest police violence against people of color. So now let's talk about some of these surveillance that's happened of those participating. Jerod MacDonald-Evoy reports for the Arizona Mirror and found that the Arizona National Guard has been flying a C-26 aircraft, normally used for surveillance on the border, as well as helicopters over the events, assisting Phoenix police in monitoring protests and those there to cause violence. I spoke with him more about the aircraft used and the lack of transparency around this kind of surveillance.

JEROD MACDONALD-EVOY: So the plane that was flying over the protests was an RC-26. It's owned by the National Guard and it's a plane that, it's been used before, mostly for, out here in Arizona, it's been used flying around the border for counterdrug missions. It's been approved to fly domestically, doing surveillance missions mostly for counterdrug operations and support of law, local law enforcement. It's also been flown overseas in wartime in Afghanistan and Iraq and has cameras on it. They can see for miles away. They have infrared and that type of technology on it as well as, it can also do what's called signals intelligence. So it can collect intelligence within the electromagnetic spectrum, so to speak. So it can pick up things like electronic communication. But we've been told that it didn't have any of that equipment onboard during any of these flights, but that's the type of surveillance and equipment it has the capabilities to do.

GILGER: So these were the National Guard flying this plane and then afterwards some helicopters over the protests. And in support of Phoenix police, right?

MACDONALD-EVOY: Correct. The Phoenix Police Department had requested that the National Guard kind of come in and give them some support, is what I had found out. The Phoenix Police Department has their own kind of fleet. They have some helicopters. They also have fixed wing asset, a plane that's kind of similar to the one that the National Guard had used as well. It doesn't have the signals intelligence collecting equipment on it that we're aware of. It just has a camera on it. But Phoenix Police Department told me that they wanted to have their aircraft available to be in other parts of the city and having the Guard available to do this opened up their aircraft to go to other things in the city as needed.

MACDONALD-EVOY: So law enforcement said to me that, you know, the goal was to have eyes on everything, to have situational awareness, be able to monitor this event, be able to guide boots on the ground, so to speak, to say, hey, we have something going on here. Let's move traffic this way or let's keep an eye on that person. Let's make sure that the protesters on the ground are safe. In regards to the past history, we saw this kind of happen before in Baltimore with Freddie Gray. The FBI was known to fly surveillance flights over there. There's been similar flights from federal partners before on on major events like this before. But in regards to National Guard over protests, I'm not entirely sure. The National Guard flew an RC-26 like this over the Super Bowl and other large events like that. RC-26s like this one were dispatched to disaster relief. But, in regards to protests, this is kind of something that's a little bit new in regards to how these aircraft are being used.

GILGER: Yeah. So let's talk about some of the concerns you raised in the piece about this. Senior policy analyst Jay Stanley with the ACLU told you one of the things that this points out is the crying need, as he called it, for transparency, for the kinds of surveillance that's being done on protesters. Do we have any idea of how much surveillance like this is usually practiced or is it out of the realm of the ordinary that protesters are the ones being watched?

MACDONALD-EVOY: And Jay did bring up a good point. And it is a little bit difficult to break that veil. When it comes to, say, your local police department, you can make a records request for, say, the footage that an aircraft takes while they're there circling a protest. I currently have records requests in for that kind of a thing. But we were told when I spoke to the National Guard, that they didn't have authorization to record any of this footage. And that's partially due to how the law works in regards to how the military can engage in this type of surveillance on U.S. citizens. But they're working alongside law enforcement, so there's a little bit of a weird caveat there. So we don't know exactly the extent of what this type of equipment was used. We don't know entirely how this went down. And the only way to figure that out now is probably through a FOIA request, a Freedom Of Information Act request. And those type of public records requests can sometimes take years to go through and often cases, the national security exemption on those type of Freedom of Information Acts are denied outright.

GILGER: So transparency is an issue in all of this. What about for the people being surveilled? I mean, is there a genuine concern about infringement of rights here?

MACDONALD-EVOY: So there's two sides of that coin, I guess you could say. The National Guard says, look, this is a safety issue. We're just trying to work with local partners and law enforcement to make sure that the protesters here are able to protest safely. We're making, trying to make sure that there are, we know that there are agitators there on the ground that are trying to incite violence, and we're trying to give local law enforcement everything within their tool box to be able to to watch out for these people. So there's that side of the coin where they're trying to say, look, we're trying to make sure that everyone is going to be able to have their First Amendment right to engage peacefully. But then on the other side of that coin, there's the privacy advocates who say, when you have a system of aircraft that are circling overhead, that are watching with this big brother-esque type camera and other systems that we may not be aware, that creates kind of a chilling effect on that speech and makes people maybe feel more fearful of going out and engaging in that speech. If they think that they may end up becoming a target of said surveillance or be put on a list or be watched or be monitored in some sort of a way. Because when it comes to domestic surveillance, the government sometimes doesn't have the greatest track record with how those sort of things have played out in the past 10, 20 years in regards to especially the communities that are speaking out right now.

GILGER: Alright. That is Jerod MacDonald-Evoy with the Arizona Mirror joining us today. Jerod, thanks so much.

MACDONALD-EVOY: No problem. Thank you for having me on.