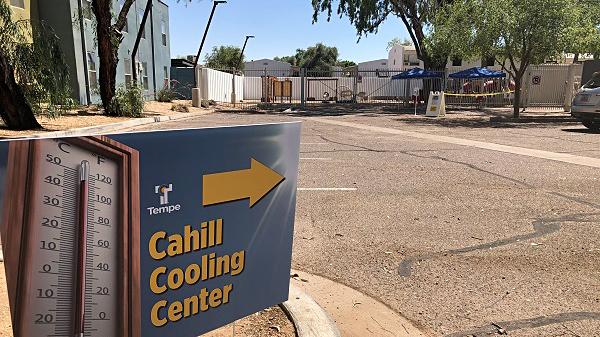 City of Tempe
Outside the Cahill Cooling Center in Tempe.

STEVE GOLDSTEIN: The city of Tempe doesn't typically operate the cooling stations that provide relief for the community's homeless population when temperatures surge into triple digits. But officials saw the need to open a COVID-safe station given this week's heat forecast. Alex Jovanovich, Community Services Manager with the city of Tempe, describes measures taken to protect the patrons of the cooling station.

ALEX JOVANOVICH: After they wash their hands, they would get screened and part that screening involves... There are a series of nine questions that are health related. In addition to that, they would have their temperature screened and, assuming all that is good, they would be issued a face mask and they're required to wear that face mask when they're in the facility.

GOLDSTEIN: We asked Jovanovich if his department was worried social distancing guidelines and fear of COVID-contamination might keep the people who need the relief from using the cooling stations.

JOVANOVICH: Yes, I think that's always a concern. We'd much rather them obviously come to the facility, even with COVID-19 around, than get into a situation where they're outside when the temperature is 110 and experiencing whether it's heat exhaustion or heat stress.

LAUREN GILGER: The city of Tempe says they have been getting calls from officials as far as away — as far away as Richmond, Virginia, and Toronto, Canada — for guidance in setting up COVID-safe cooling stations.

GOLDSTEIN: Jessica Boehm with the Arizona Republic visited homeless encampments this week as temperatures reached the 90s. And she's with us now for a few minutes to describe what she saw and what it is like to spend just two hours where some people live. Jessica, good morning.

GOLDSTEIN: So let's describe that a bit. You describe it well in your writing, but tell our audience about this. How did it feel to be out there? You were out there for just a couple of hours and not at the peak temperature hour.

BOEHM: Exactly. I was out there between 8 and 10 a.m. Temperatures were in the 90s at that point. And I can tell you that by the time I got back to my car — and, granted, I was also wearing a face mask for COVID-19 precautions, which doesn't help with airflow, obviously. But I got into my car and was extremely shaky and dehydrated, and it really put into perspective for me just what the folks who don't have a roof to go home to have to deal with during our summer heat.

GOLDSTEIN: And at this point, what is being done to protect people in this homeless situation and, in any way, i  we stayed at 103, would there be anything OK with that? I mean, are there possible cooling stations? Is there water available? Or is this situation just untenable?

BOEHM: It's going to be a very difficult summer. Usually, the Human Services campus is able to bring people inside for weather relief, including overnight. Last year, they had a space for an additional 275 above the nearly 500 people they serve every night at the CASS shelter. During these excessive heat advisories that we're under right now, we're not able to do that this year because of COVID-19; they're trying to create more social distance. So that leaves a lot of people outside who might be extremely vulnerable to heat-related conditions. So, yes, there's water available. There’s a lot of people trying to get frozen water so that people can cool their core temperature of their body. And just this morning, the city of Phoenix announced that they will be opening up the Phoenix Convention Center for during-the-day heat relief during these weather advisories like we're under currently.

GOLDSTEIN: And considering how many people are working from home or simply not working right now, could there be other options for the city to use in addition to the convention center?

BOEHM: That's been a request not only to the city, but to any level of government or anyone with open buildings. That's, you know, I talked to doctors who work with this population, to service providers, and they're really just looking for indoor space with air conditioning to house people. It's wonderful to have this respite center during the day, but I think people forget that during that nighttime in Phoenix, during these excessive heat warnings, our temperature does not cool down significantly. People die overnight. People die as they're sleeping. So there's still no overnight relief. But there is an effort to possibly bring some kind of large climate-controlled tent that could go into parking lots near the Human Services campus west of downtown. So that could be coming, but probably still a month away at the earliest.

GOLDSTEIN: Jessica, just about a minute left. One man you spoke to in your story said it was like a jail. Can you, can you share a particular story of someone you spoke to that really stood out to you about the experience?

BOEHM: You know, every person you talk to down there has a different story, and right now a lot of folks have been moved into parking lots where they have twelve-foot by twelve-foot squares that they can exist in to provide that social distancing. And for some people, they like that. They feel like it's safe and secure. For others, people did say it's like a jail. They are surrounded by, you know, a gate. It is a difficult thing to see people living in those conditions. And I'd encourage anyone to go out there and take a look.

GOLDSTEIN: Jessica Boehm, reporter for the Arizona Republic, focuses on the city of Phoenix and Maricopa County. Jessica, thanks as always. Be well.