Hundreds Gather In Phoenix To Demonstrate Against Death Of George Floyd 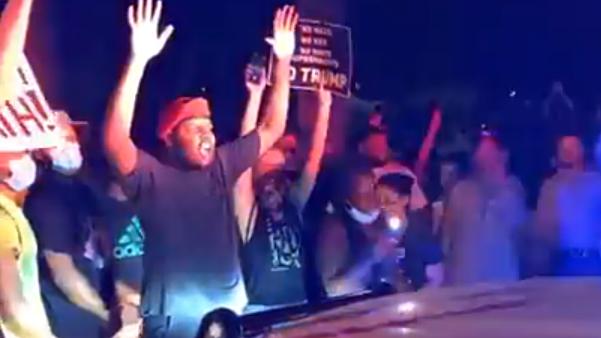 Garrett Otto
Protesters in Phoenix demonstrate against the killing of George Floyd on Thursday, May 28, 2020.

Hundreds of protesters gathered in Phoenix last night to demonstrate against the death of unarmed 46-year-old George Floyd in Minneapolis.

The demonstration was organized by All Black Lives Matter Arizona and civil rights leader the Rev. Jarrett Maupin, who says the event was successful and "nonviolent," despite reports of clashes with police and damage to property and vehicles.

Around 11 p.m., police declared an "unlawful assembly" near Wesley Bolin Plaza and announced on a loudspeaker and social media that demonstrators must vacate the area.

Eight arrests were made by the end of the night and one driver was cited for civil traffic violations, according to the Phoenix Police Department.

Williams says officers will be deployed to monitor the situation, and anyone in the area must vacate if an unlawful assembly is declared.

“We do respect all those who want to exercise our First Amendment rights peacefully and we support that." Williams said. "But we cannot and will not tolerate criminal activity which endangers our community, our officers and other demonstrators.”

It’s hard to know what to say at a moment like this. People are hurt, upset, and angry, and they have a right to be. This pain and frustration comes from a lived experience that isn't mine but that does not diminish the role I must play in helping to change the future. Part of my job in a moment like this is to listen above all else.

The killing of George Floyd takes place against a backdrop of systemic inequities, particularly for African-Americans, that are larger than any one incident. We all have a responsibility to address this inequity. People are right to stand up and demand change.

We must have high standards for all public servants, including law enforcement. There are many officers looking at, and reflecting upon, this incident who are motivated to work even harder to build greater trust with communities where that relationship has eroded. Most residents understand the difficult tightrope officers must walk every day.

As we work to implement change and push toward racial equity, I ask residents to continue to look out for one another and recognize that hurt begets hurt.