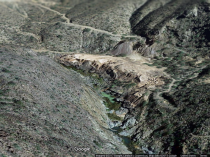 Google, Landsat/Copernicus
The Hillside Mine site north of Bagdad, Arizona.

A mining company has been fined more than $5 million for an arsenic leak in Yavapai County.

The leak was first discovered after an investigation in 2013. Arsenic contaminated water was spilling into Boulder Creek at a rate of 2.6 million gallons a year.

The owner of Hillside Mine, Bagdad Hillside, LLC, signed three compliance orders to come up with a plan to stop the leak and apply for environmental permits. However, Hillside Mine reportedly never sent its plan, and the leak continued.

In 2018, the owner of the Hillside Mine was convicted on three felony counts of pollution.