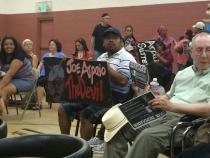 Jude Joffe-Block/KJZZ
Community members commented for over an hour. The crowd was diverse, though predominantly Latino. 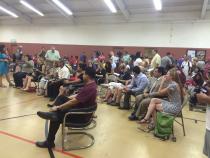 A community forum on reforming the Maricopa County Sheriff’s Office on Wednesday evening erupted in calls for Sheriff Joe Arpaio to be removed from office and taken away in handcuffs.

Community engagement was one of the remedies prescribed by U.S. District Court Judge Murray Snow after he ruled in 2013 that the Sheriff’s Office systematically racially profiled Latino motorists.

Snow created a community advisory board, which convened Wednesday’s forum. The board is supposed to pass on community feedback to Snow’s independent court monitor. The board members were selected by the American Civil Liberties Union of Arizona, which represents plaintiffs in the racial profiling case.

More than 130 people attended the forum at Grant Park in downtown Phoenix.

A major topic was how Arpaio should be fairly punished since he has admitted to repeatedly violating Snow’s court orders in the racial profiling case. The Sheriff's Office continued to detain immigrants who had not committed state crimes and turn them over to federal agents for deportation after Snow ordered that practice to stop.

Arpaio is in the midst of contempt of court proceedings, which could result in fines as well as possible criminal contempt charges.

Community members commented for over an hour. The crowd was diverse, though predominantly Latino. Because Spanish speakers outnumbered English speakers, the organizers decided to hold the meeting in Spanish. An interpreter offered simultaneous translation for English speakers.

A man named Luis Madrid said in Spanish that a person who breaks the law is a criminal and should be treated that way.

If Arpaio actually were to face criminal charges and incarceration as a result of the contempt case, he would be sent to a federal facility. Nevertheless, several commenters said it would only be fair if Arpaio had to wear a striped uniform and pink underwear in his own Tent City.

Others spoke about the pain the Sheriff Arpaio caused by splitting up immigrant families. Some waived signs that read “Joe Arpaio The Devil” or “Surrender Arpaio.”

About an hour and a half into the evening a woman led the crowd in chanting, “Fuera, fuera” which translates to “Get out,” as in “Get Arpaio out of office.”

Meanwhile, Arpaio has been calling on Snow to get off the case.

Arpaio is arguing Snow should recuse himself because he created a conflict of interest when he directly questioned Arpaio about investigating him or his family in April.

Arpaio revealed his lawyer had hired a private investigator to check out comments allegedly made by Snow's wife. The private investigator followed up after a woman told the sheriff over Facebook that she heard Snow’s wife say the judge wanted to get Arpaio out of office.

Arpaio’s recusal motion has put the contempt case on hold and delayed a hearing that had been scheduled for June.

Snow has yet to rule on the motion.

Community Advisory Board Member Viridiana Hernandez said at the conclusion of the meeting that it was apparent the Sheriff’s Office had not healed its relationship with the Latino community.