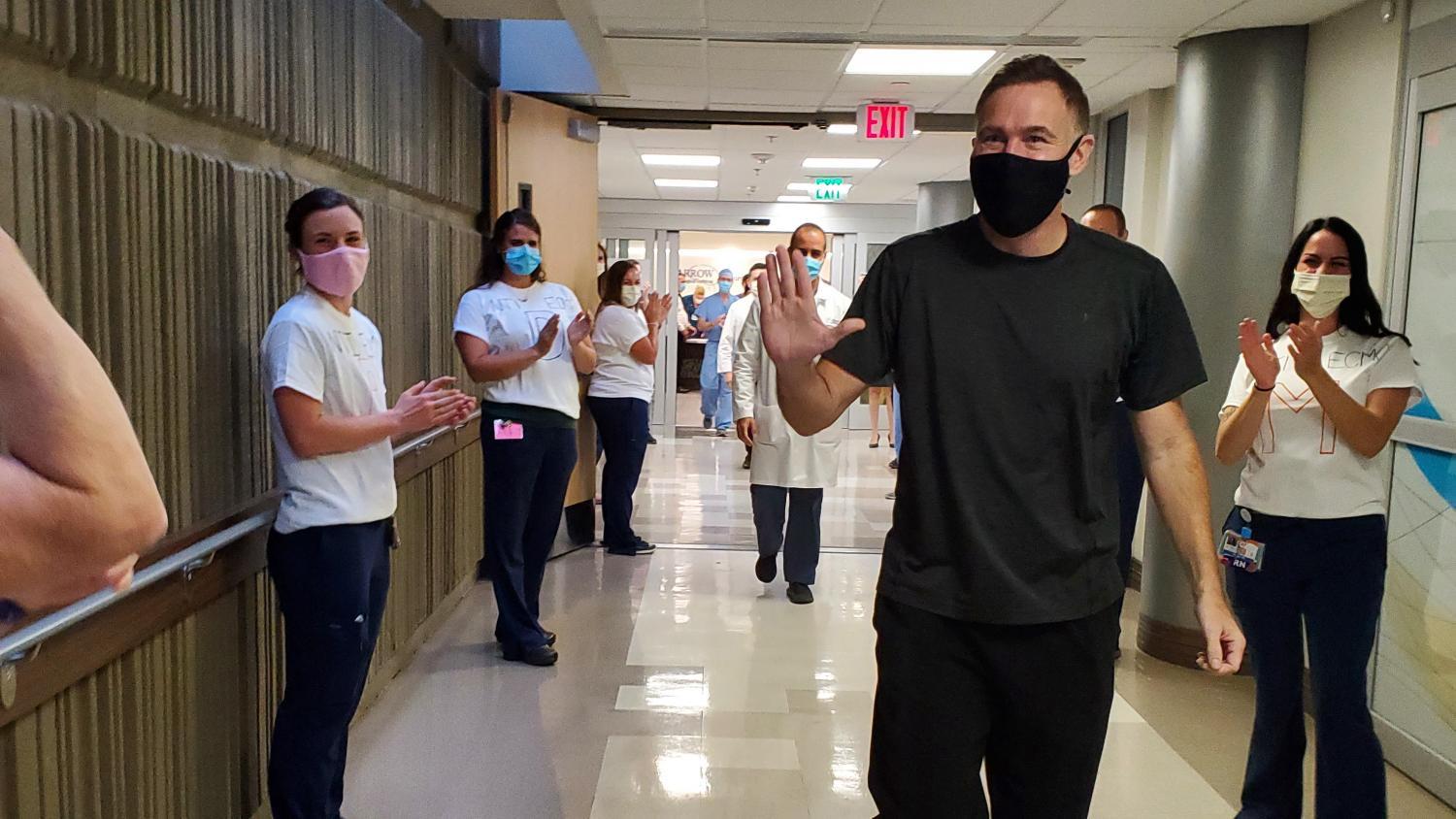 A 46-year-old Phoenix-area doctor who was not expected to survive COVID-19 has recovered following treatment at St. Joseph's Hospital and Medical Center.

"Nobody sees himself contracting a disease like this. I'm 46, and I've never been sick in my life, really. I have no past medical conditions, and this virus nearly killed me," said Dr. Karl Viddal, who has an independent family practice in Chandler.

Viddal spent 34 days on a ventilator, 28 days in a medically induced coma and 16 days on extracorporeal membrane oxygenation (ECMO), in which a bypass machine takes over the work of the heart and the lungs.

"Essentially, what the machine does is remove blood from the patient, oxygenate it in an artificial membrane oxygenator, and then return it back to the patient," said Dr. Ross Bremner, director of St. Joseph's Norton Thoracic Institute.

The drug had previously been used to treat coronavirus patients in China and Italy.

Viddal came down with a fever and a cough just over two months ago after returning from a trip abroad. His health quickly declined. When it became clear a ventilator could not keep Viddal alive, a special team placed him on ECMO.

"Karl developed such a severe infection that, without the support of the ECMO, he was facing nearly a 100 percent mortality within 24 to 48 hours," said Dr. Raed Suyyagh, medical director of the ECMO program at St. Joseph's Norton Thoracic Institute.

During his illness, Viddal experienced other COVID-19 complications, including blood clots, bleeding into the lung and bleeding from his main airway.

He also developed a tension pneumothorax, a life-threatening condition in which air becomes trapped between the lung and the chest wall, limiting breathing and circulation.

To deal with these problems, his medical team performed procedures that put them at greater risk of COVID-19 exposure, including multiple bronchoscopies, chest tube insertions and a tracheostomy.

"With the help of St. Joseph's Hospital providing us with the proper PPE, as well as the support of our Norton Institute and redesigning the intubation boxes, we were able to do these procedures safely," said Suyyagh.

Suyyagh said Viddal was the 32nd patient in the United States, and the second in Arizona, to be placed on ECMO therapy for COVID-19.

After being taken off the ECMO machine and ventilator, Viddal entered Barrow Neurological Institute for rehabilitation, still on oxygen and barely able to walk. Two weeks later, he'd largely recovered.

"I feel blessed because I only had one organ affected, which was my lungs. My heart was OK, liver was OK, my kidneys were OK. And I had an X-ray taken this week, which showed almost full resolution of the damage that was done in my lungs," he said.

Although the recovery gives cause for hope, ECMO remains a treatment of last resort with a low survival rate.

Asked what he thought about the state reopening, Viddal said he understood people needed to work, but urged them to take precautions.

"And you know, some people will get lucky, and they'll get cold-like symptoms or maybe flulike symptoms at worst. But this is a virus that will kill you. And we don't know who it will affect," Viddal said.