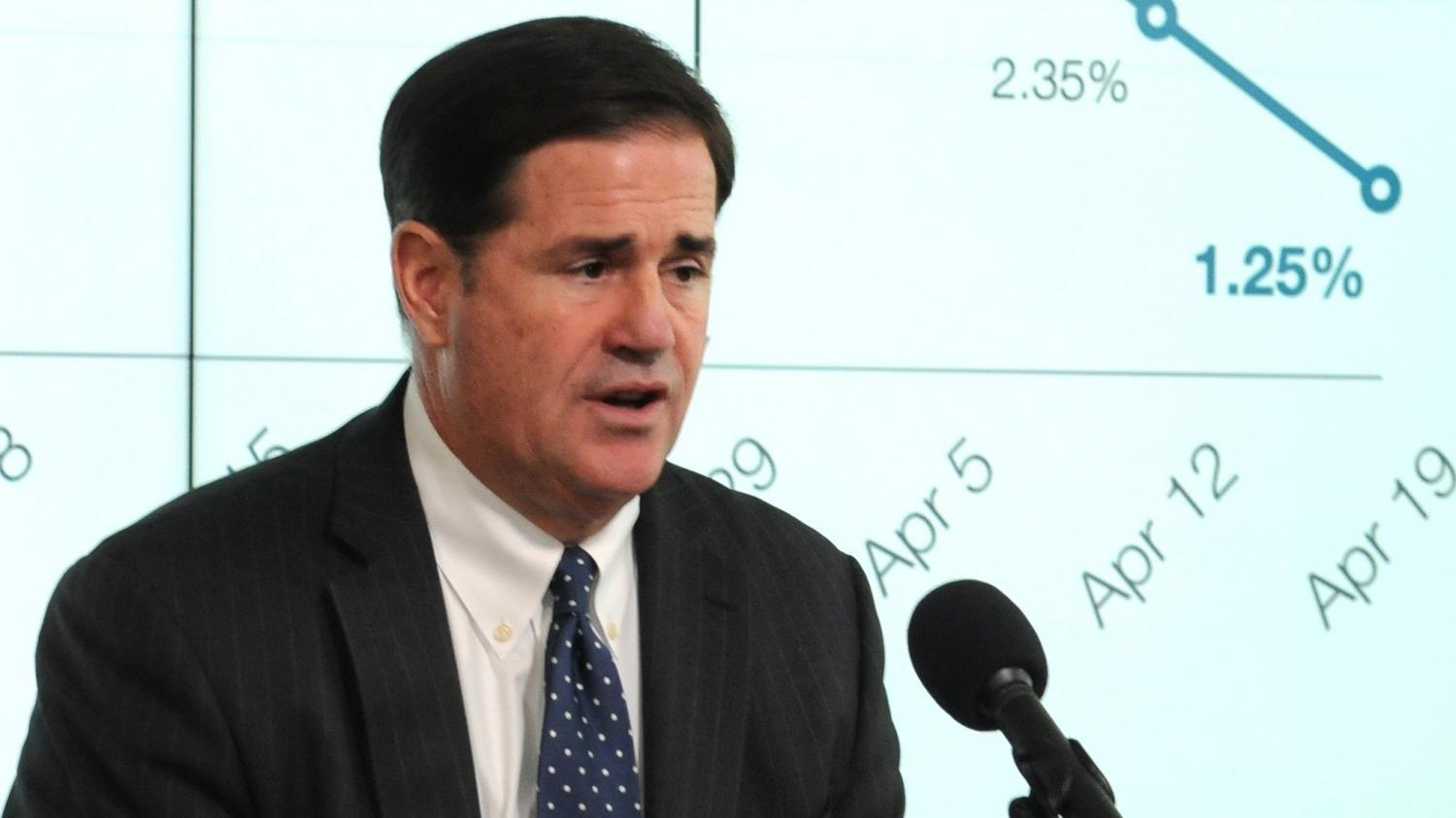 Howard Fischer/Capitol Media Services
Arizona Gov. Doug Ducey explains April 29, 2020, how he intends to allow more businesses to open their doors in the next few weeks

The governor announced Wednesday that he’s extending his stay-at-home order through May 15. Ducey’s initial order was set to expire at midnight on Thursday.

While some of the governor’s fellow Republicans have urged him to promptly reopen Arizona businesses, Ducey also faced strong pressure from health officials, religious leaders and other communities to make such a decision based on science.

Ducey said Wednesday that the available data doesn’t give him the confidence to let Arizonans back to their normal lives.

"There is not a trend,'' he said. "And what I'm looking for, what (Arizona Department of Health Services Director) Dr. Cara Christ are looking for are trends.”

The Centers for Disease Control and Prevention recommends waiting until communities have experienced downward trends in infections and COVID-like symptoms for two weeks.

Ducey later said the state needs more information before he and health officials can make an informed decision about what comes next for Arizona businesses and residents. He touted efforts to increase testing in Arizona, including a three-weekend “testing blitz” that could nearly double the number of Arizonans who’ve been tested for COVID-19 so far.

The governor also praised efforts by the University of Arizona to begin antibody testing, though initially that will be limited to testing health care workers and first responders.

And Ducey struck an optimistic tone by modifying his stay-at-home order to allow some retailers, and potentially restaurants, to open in limited capacities in early May while still practicing social distancing.

Retailers that weren’t included in Ducey’s executive order listing essential businesses can partially reopen on May 4 for deliveries, curbside pickups and appointments.

Other businesses can voluntarily reopen May 8 with reduced occupancy, Ducey said. 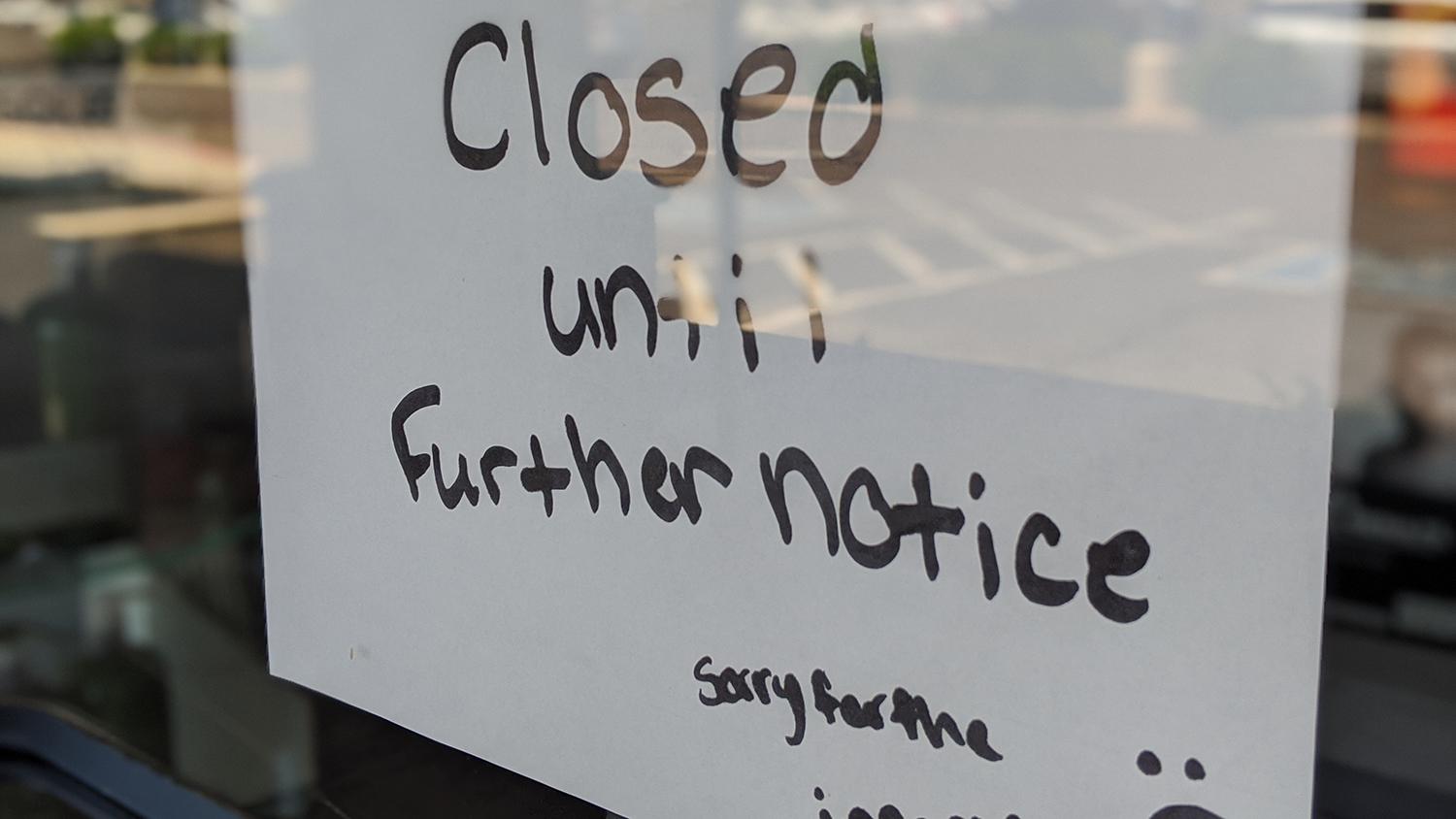 Sky Schaudt/KJZZ
A sign on a store in north Phoenix business on April 29, 2020.

Bars must remain closed, but dine-in restaurants could reopen in limited capacities by May 12. Ducey said the date is based on advice from restaurants, but that there’s no guarantee those businesses will open by then.

Nonetheless, Ducey was bullish that the drastic measures taken to preserve health in Arizona have prepared the state for a strong recovery.

“There’s a real opportunity for May to be dramatically different from March or April,” Ducey said.

Arizona mayors, who’ve been critical of Ducey’s initial response to the pandemic and later his preclusion of their local authority, praised his decision to extend the order.

“We have slowed the spread of COVID-19 in Arizona. Staying at home has worked and has saved lives. So the governor said thank you to Arizona; I would join him in saying thank you to Arizona for the huge sacrifices you have made to save lives,” she said.

Gallego also said she’s concerned that Ducey already has an eye toward reopening businesses before seeing the downward trends recommended by the federal government.

The mayor said she wants more clarity on which businesses can reopen in early May and how they’ll have to operate.

“It did make me nervous that he was already signaling what he might be doing on [May 12] without having those trends yet,” Gallego said. “Given the choice, I would like to see Phoenix follow the Centers for Disease Control guidelines. I think they are responsible. This administration is incredibly eager to reopen the economy, they are not going to be overly protective of public health. So we should follow those basic requirements.”

However, Ducey made clear that his orders will apply to all of Arizona, whether local leaders agree with him or not.

And he warned against businesses who might buck his order and attempt to reopen early. Specifically, Ducey warned bars, which aren’t included in his efforts to reopen restaurants, that opening before he explicitly allows it could put their liquor licenses at risk.

“When I give statewide guidance, it is statewide, and it is enforceable by law,” Ducey said.

As for those businesses not included in Ducey’s initial plans to reopen the economy, the governor asked for patience.

“I feel your frustration, and I have a sense of urgency to reopen, and I want to do that,” Ducey said. “I just want to do it at the right time, and I want it to be successful. It would be irresponsible for me to make decisions to reopen with the chance that I would have to come back because we didn’t have the proper guidance or data and ask people to do this again.”

For a reaction to the governor's extension, KJZZ's The Show spoke to Dr. Rebecca Sunenshine, medical director of the Maricopa County Department of Public Health; Todd Sanders, president and CEO of the Greater Phoenix Chamber of Commerce; and state Sen. Michelle Ugenti-Rita (R-Scottsdale).