Over a dozen U.S. Air Force and Arizona Air National Guard aircraft on Friday afternoon conducted a flyover above metro Phoenix to honor health care workers and others responding to public needs during the coronavirus pandemic.

Air Force Brig. Gen. Todd Canterbury said the participating military personnel were honored to extend heartfelt gratitude to health care workers and others fighting the outbreak. He added that participants want those who watched the flyover to “enjoy the display of American airpower, resolve and pride while keeping frontline responders in their hearts."

Canterbury says it was a privilege to fly over those on the front lines of the COVID-19 pandemic.

"I got goosebumps every time we flew over one of our major medical centers," Canterbury said. "I know those men and women are slogging it out in the trenches of this warfare, and it was my honor to be on top and look down and say ‘we’re here for you.’ The military has enjoyed fantastic support since the Global War on Terror, this was our chance to give back and say thank you." 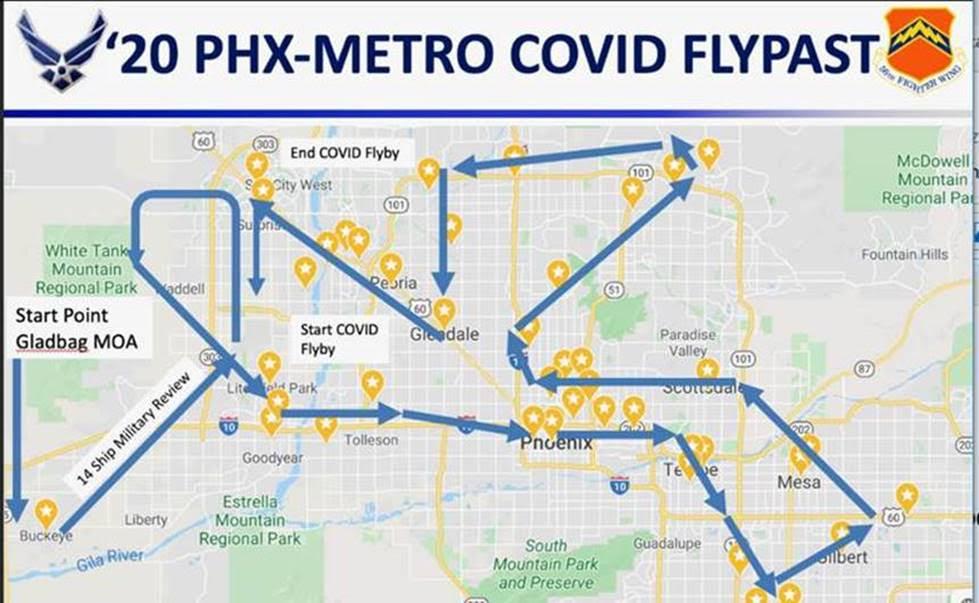 Canterbury is commander of the 56th Fighter Wing based at Luke.

Luke's announcement advised residents to view the flyover from their homes and to maintain social distancing during the event. “They should also refrain from traveling to landmarks, hospitals and gathering in large groups to view the flyover," the statement said.

The stars on the map represent hospitals, downtown areas and other landmarks the Air Force wanted to fly past, says Staff Sgt. Amber Carter with Luke public affairs.