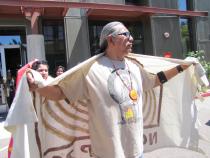 (Photo by Stina Sieg - KJZZ)
Members of three local tribes came together Wednesday to protest the proposed South Mountain Freeway. The roadway has been planned for three decades, and is meant to alleviate congestion on the Broadway curve.

“No desecration for transportation!” loudly chanted a band of protesters, standing in the sun.

The members of three local Native American tribes were outside an Arizona Dept. of transportation meeting Wednesday and speaking out against an extension of the Valley’s Loop 202 Freeway. It has been in the works for three decades and controversial just as long. Now, construction could be about a year away.

The protesters were outside an event featuring presentations from development companies hoping to build the South Mountain Freeway. Andrew Pedro is from the Gila River Indian Community. The freeway will damage South Mountain, he said, an important site for his tribe.

ADOT spokesman Tim Tait said the freeway will go through South Mountain Park Preserve. But he said his agency had no choice after the Gila River Indian Community voted against allowing the roadway to go through their land.

There will be small impacts from the project.

“But there are impacts to doing nothing,” Tait said. “And the regional transportation plan and the mobility necessary to move people and the economy really dictate that we continue to enhance the transportation system that we have today.”

In May, South Mountain Freeway opponents sued ADOT over the plan, but the agency still expects the 22-mile stretch to be open to traffic within the next five years.