Why Some Phoenix Grocery Stores Are Hotspots For Census Ads 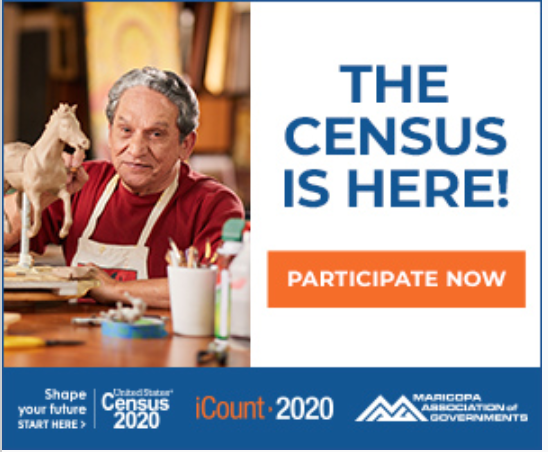 City of Phoenix
An example of a census ad.

Phoenix is relying more on geofencing technology to boost its census response rate.

“In Phoenix specifically, we’ve identified 32 grocery stores within census tracts that have some of the lower response rates so we can capture individuals' presence while at these facilities and be able to send them encouraging messages about participating in the census,” he said.

During a council meeting Thursday, Santana said the city’s overall response rate was 50.5%. Arizona’s statewide rate was 49.4% and the national rate was 51.8%.

Among cities with populations over 1 million, he said Phoenix’s ranks third behind San Jose, California, at 60.7% and San Diego at 58.5%.

Due to the pandemic, the Census Bureau has suspended field operations until at least June 1 and extended the deadline to respond to Oct. 31.

The Constitution mandates a census every 10 years to count every person living in the U.S., regardless of citizenship status, race or age.

The Governor’s Office says the state receives $2,959 in federal funding for each person counted in Arizona. Census data are also used to calculate seats in the U.S. House of Representatives. Thanks to population growth, Arizona is expected to gain one congressional seat.