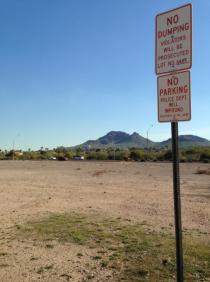 (Photo by Nick Blumberg-KJZZ)
This 4.5 acre vacant lot at the northwest corner of 12th Street and Greenway Parkway is valued at more than $500,000. 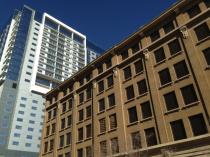 (Photo by Nick Blumberg-KJZZ)
The Barrister Place office building sits across the street from CityScape and down the block from US Airways Center and Chase Field, used to house the Phoenix Police Museum and several City of Phoenix departments.

Phoenix's 500-plus square miles are dotted with vacant lots and empty buildings. Some of that property is owned by the city, and it presents opportunities to generate revenue, redevelop neighborhoods or make city land use more efficient. But before Phoenix's leaders can put the land to its best use, first they need to know exactly what they have got, and that process is underway.

The Barrister Place building in downtown Phoenix is at the southeast corner of Central Avenue and Jefferson Street. It is a beautiful historic building. It actually used to be the Jefferson Hotel and is listed on the register of historic places. Now, its 38,000 square feet of office space is owned by the city of Phoenix, and it is completely empty.

"Should we be land banking, or should we be getting that out and get it developed to create jobs and create business in the city?" asked Phoenix's outgoing Chief Financial Officer Jeff DeWitt in an interview late last year.

DeWitt said Phoenix has a list of all city-owned property for accounting purposes, but the parcels are all managed by different departments. Right now, Phoenix is looking to sell or lease three properties it does not need, including Barrister Place.

And the City Council has agreed to hire a brokerage firm to catalog all the city's vacant lots and empty buildings, "and not only look at whether it's vacant or not, but [look at] what's the planned use within the next five years. We don't want to sell a piece of property that, maybe, housing has and find out that the police department's looking for the same piece of land."

If another department wants the land, it will get transferred, but if there is no plan to do anything with it in the next five years, it will be up for sale or lease, which could bring in millions in revenue. The new database will show things like the property's size and value or whether it is historically significant. DeWitt said all that information will help them market the property and get it off the city's plate.

"If you've got 10 acres sitting in the middle of a neighborhood, there's not only the drag on the neighborhood of vacant property, there's a cost to us to maintain it, mow it, [and] make sure security's there," DeWitt said. "Maybe it has a building on it, we have to make sure it doesn't get broken into, make sure that it's maintained and the neighborhood looks good."

Another city-owned property Phoenix hopes to unload is a 4.5 acre lot that is empty except for some scrubby bushes and trees and trash. It is at the northwest corner of 12th Street and Greenway Parkway in North Phoenix. Even though it is in the middle of a developed neighborhood, this lot could actually be useful.

"Having land available for development is probably part of the smooth functioning of the development process and keeps the cost of land at reasonable levels," said Armando Carbonell with the Lincoln Institute of Land Policy.

"One could think of city-owned land in particular as an opportunity to advance some urban planning strategy, to think about how to provide more vitality in the downtown, to think of ways to support the use of light rail in Phoenix," Carbonell said.

One group that has been working on urban planning in the Valley is the Discovery Triangle. It focuses on an area of the same name running between downtown Phoenix and downtown Tempe. Analyst Allie Anderson has collected a ton of data, not just about parcel ownership and zoning laws, but also things like, "transportation systems and drive times and arts and culture and all of the schools in the area."

The group's CEO Don Keuth said it is pretty simple, nobody prospers from vacant land.

"It can be a blight, it can be an eyesore, it can be a breeding ground for the collection of trash, illegal activities, whatever the case might be," Keuth said.

Getting it developed can bring jobs, residents or retail. It adds to the tax base of local school districts, but as just about everyone knows, development took a huge hit during the recession.

"I think you're going to see in 2014 a concerted effort to [develop land]. You didn't see it over the last three years because there wasn't a real estate market to do anything with," said Keuth.

Soon, Phoenix will be better poised to get its vacant property on that market. The database of excess city-owned property is set to be ready by the summer or early fall.