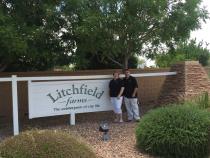 (Photo by Will Stone - KJZZ)
Steve and Jeanette Royer manage a homeowners association in the West Valley where the cost of water has increased significantly in recent years. 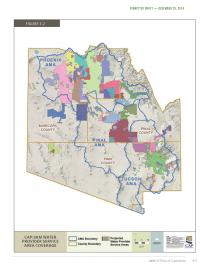 A few years ago, Jeanette Royer and her husband, Steve, took a hard look at the cost of water for Litchfield Farms, the homeowners association they manage in the West Valley, and came up with some ways of cutting back.

You would be hard-pressed to find extravagant lawns and sprinklers running indiscriminately in this far flung corner of the West Valley.  While they have made major strides in conserving water, that has not translated into savings.

“We’re seeing a significant increase in the water taxes on our property taxes,” said Jeanette. “The usage and water taxes don’t seem to jive.”

A water tax is a specific fee included in the Royer's property tax assessment, which has more than doubled over the past six years. One year, their bill went up almost 100 percent, even though they used 200 percent less water.

This HOA is part of a largely unseen management scheme that has fueled growth for the past two decades: the Central Arizona Groundwater Replenishment District — GRD, for short. The Legislature created the program in response to Arizona’s restrictions on groundwater pumping, specifically, that a new development must show a 100-year supply of renewable water.

That was a problem for many proposed subdivisions on the edges of the Valley not served by municipal providers. All they had available was groundwater. Thus, the GRD was born, which allows members to use that underground source.

That is accomplished by filling large basins and letting water percolate into the ground. In essence, the program, which is part of the Central Arizona Project, was designed to keep new developments from "overdrafting" or mining the aquifers, which can lead to land subsidence, earth fissuring and poor quality water.

About 250,000 homes in central and southern Arizona are enrolled in this program. More than 100,000 are expected to join over the next decade.

Kathleen Ferris is with the Arizona Municipal Water Users Association and calls the replenishment district a “terrible” idea.

“You should have water supplies in hand before you allow growth to proceed,” said Ferris.

Ferris argues it has led to sprawl on cheap desert land instead of following sustainable water supplies. On top of that, the GRD cannot prevent anyone from joining.

“If you allow people to keep pumping because somebody is going to fix it somewhere down the road, eventually, you create a much bigger problem than if you, at the front end, say, ‘Wait a minute, we shouldn’t be allowing this growth to occur on groundwater,'” said Ferris.

Ferris worries it is only a matter of time before the water for this program runs out and the aquifers begin to suffer. Her organization, representing many cities in the Valley, recently submitted comments saying the replenishment district has not adequatley demonstrated it has enough water for the coming two decades.

“The water supplies they say they plan to use are not necessarily in their control. They project out about what kinds of water supplies are out there and basically, what they hope to purchase,” said Ferris.

This is where the current drought comes into play. Two-thirds of the replenishment district’s water comes from the Colorado River. If a shortage hits in 2017 or sooner, all of that water, known as "excess Central Arizona Project water," will disappear.

But Dennis Rule said they’ll still have enough to meet the current yearly demand. And if the drought lasts, the district can turn to reserves, known as “storage credits," which is like a savings account in the aquifer.

“With our current level of obligation right now, we have probably at least a 20- to 30-year supply available to us in long term storage credits,” said Rule.

On this point, Ferris disagreed, saying there will be intense competition in the Valley for this same water.

Compared to what cities need,  the GRD’s annual obligation is small, at the moment, only about 35,000 acre feet. Rule says that is lower than what was previously projected, most likely due to the Recession, and it will only grow modestly in the coming years.

“It really is not an unsurmountable amount of water for us to be able to develop and acquire even with other parties developing their own water supplies, too," said Rule.

The state is confident about the viability of this program, as are the developers who submitted comments supporting it.

But questions remain: What happens as the economy picks up and more subdivisions come to depend on it?

Sharon Megdal, who is on the board overseeing the GRD, said it has a good strategy for acquiring new water, but admits that may not come cheap.

“As the Central Arizona Groundwater Replenishment District has to go find more supplies, it is going to be paying more and costs will go up,” said Megdal.

For those who are enrolled, this is worrying. Jeanette and Steve Royer shake their heads. Like many, they barely understand this byzantine management structure and how their fates are linked.

“What is it for? How’s it going? I think there needs to be a lot more education," said Jeanette.

"Even in our budget periods, the homeowners are always asking what is this tax? What does it mean?" said Steve.

"And we don’t have a proper explanation for it,” said Jeanette.

The state is currently reviewing the GRD's plan of operation and could deny it, but that has never happened before.