Solar Advocates Hope To Increase Presence On SRP Board 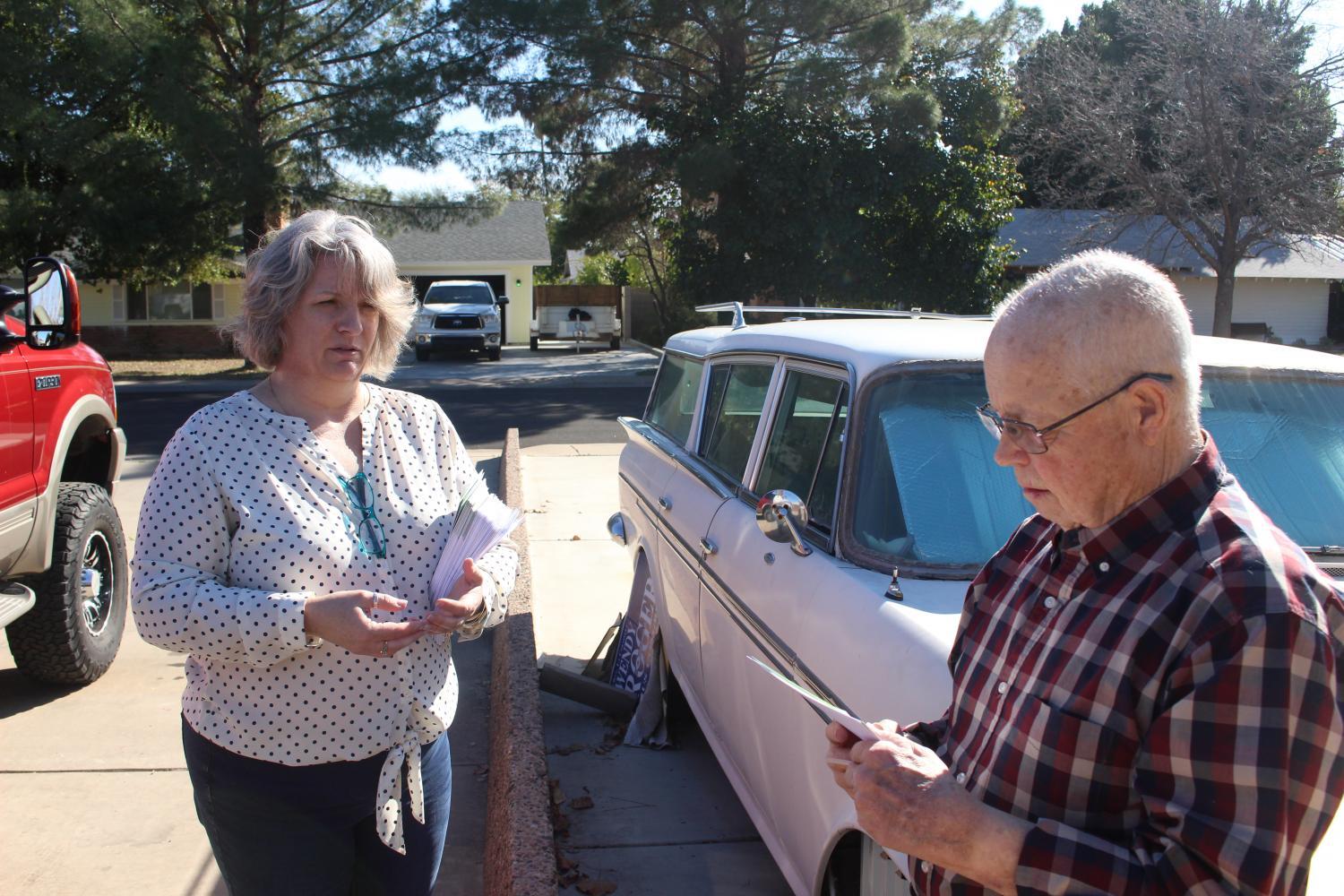 Kathy Mohr-Almeida of Mesa is a candidate for the board of the utility Salt River Project. Back in February, she was going door-to-door to talk to potential voters.

“Of the entire body of customers of SRP, there’s only 40% that can vote, and you’re in that 40%,” she told homeowner Ryan Arias. She handed him instructions for requesting an early ballot.

SRP provides electricity and/or water to more than 2 million Valley residents. Races for board seats have a lower profile than contests for Congress or even the Arizona Legislature, and yet environmental advocates like Mohr-Almeida, a member of the Executive Committee of the state’s Sierra Club chapter, are pursuing the role in order to influence energy policy in the region.

Mohr-Almeida, a psychotherapist, said rooftop solar would be more affordable if SRP changed its fees and rate plans.

“I’d like to see significantly more solar panels on people’s houses, including my own,” she said. “In order to do that, it’s got to be economically viable. And right now it’s not, unless you’re ASU or other big businesses.”

Homeowner Arias has a coworker who installed rooftop solar panels and has to worry about demand charges from SRP.

“If he runs the hot water heater in the morning, he gets hammered,” Arias said.

“Exactly,” replied current SRP board member Randy Miller. “That’s why we’re on the board, to try to change that.”

Miller is not up for re-election this year but organizes the canvassing to help Mohr-Almeida and other like-minded candidates.

Mohr-Almeida’s opponent is incumbent Robert Arnett, a business owner in Mesa. Arnett has been a member of the SRP board for four years and before that was a “council” member for eight years. Board members vote on electricity rates and power plant investments, while council members have broader input on policy. 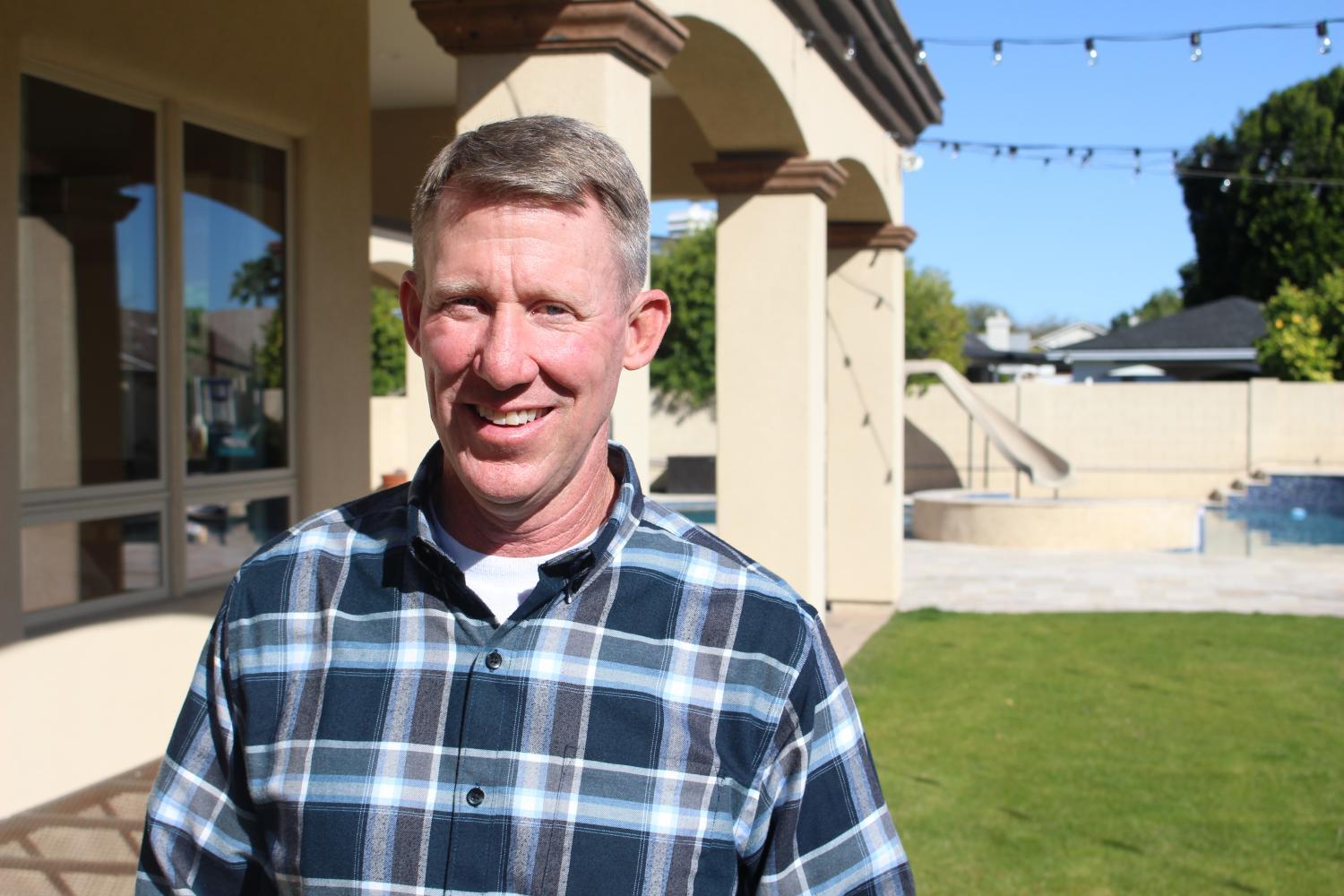 Bret Jaspers/KJZZ
Robert Arnett is a current SRP board member.

Arnett is often an ally of the solar caucus on SRP’s board just not every single time.

“I’m for rooftop solar, but I’m for it in a manner that allows other people to have choices as well,” he said in an interview.

Arnett said if SRP incentivizes rooftop solar, rates might have to rise for other customers, like businesses or low income residents. He wants to find a middle ground.

In the meantime, Arnett points to the success SRP has had with utility-scale solar. These are big projects that create massive amounts of energy and where panels can track the sun as it moves. And the company last year introduced an ambitious plan to reduce carbon emissions 62 percent by 2035.

“When I hear people say ‘we want to ensure a future for our children,’ then I say ‘we’re doing it,’” Arnett said. “We’re putting on a thousand more megawatts of utility-scale solar. And that is reducing our carbon footprint faster than anything else we could do.”

Arnett likes that SRP board members have a mix of backgrounds: solar advocates, farmers with water expertise, and business owners like him. He thinks the utility is moving in the right direction, especially given its new sustainability plan.

Solar advocate and board member Paul Hirt agrees there has been improvement. 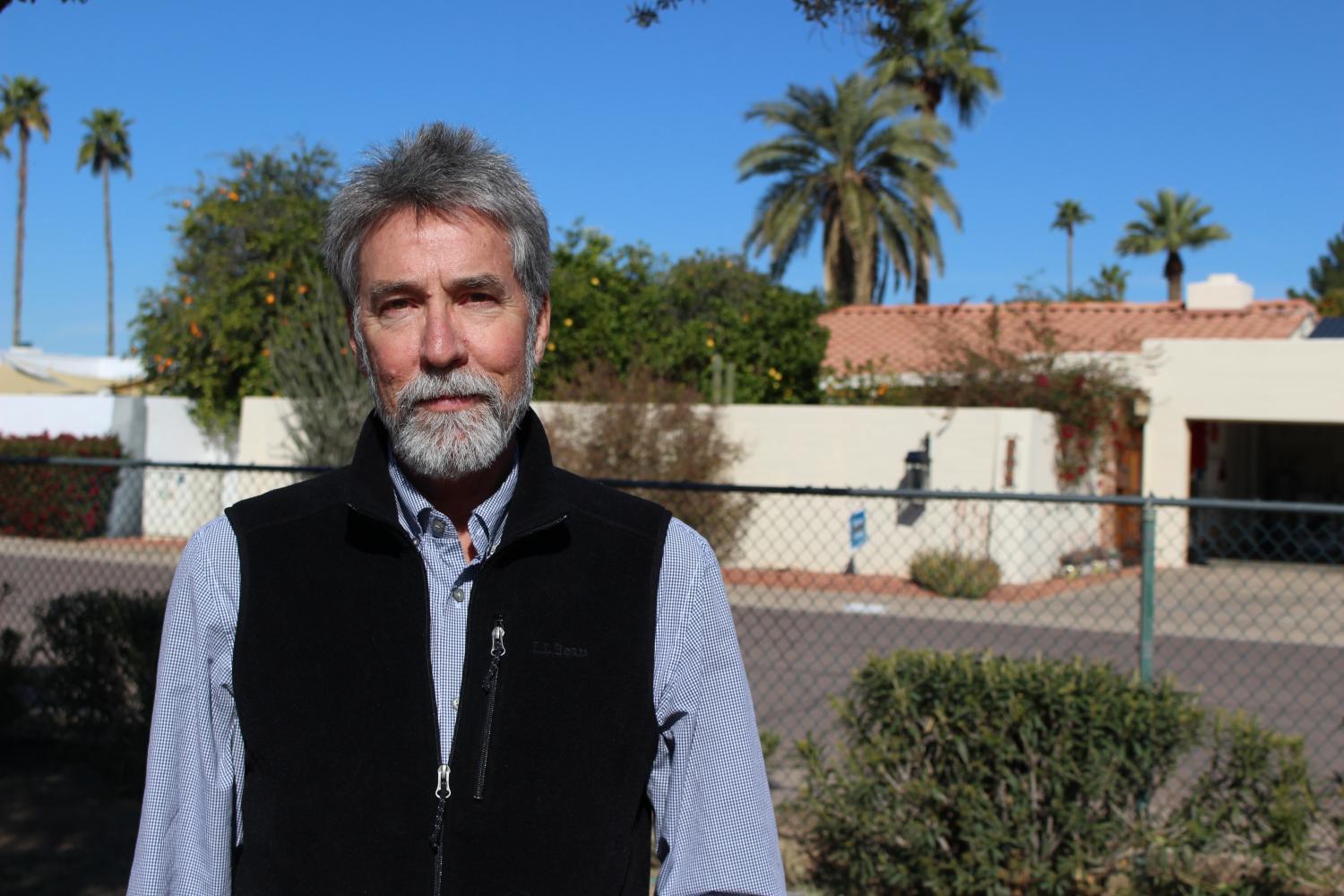 Bret Jaspers/KJZZ
Paul Hirt is stepping down because he’s retiring and moving out of the Valley.

“Both the majority of board members and now our leadership in management are simply not denying climate change and are embracing [our] moral obligation to do something to reduce CO2 emissions,” Hirt said. He is stepping down because he’s retiring and moving out of the Valley.

“Every place where we want shade we should be generating clean energy,” Hirt said. “And we need an electric grid that’s able to manage a widely-distributed energy generation system like that and thinks of its customers as partners rather than as simply consumers.”

Elected in 2016, Hirt was motivated to run after SRP’s board passed a demand charge on rooftop solar customers the year before. SRP has since added other rate plans for solar customers, but Hirt calls them “all lemons.”

The solar caucus currently holds all four at-large board seats, and hope to expand their influence into the seats with geographical district boundaries. Mohr-Almeida is running against Arnett in Board Division 9, which covers part of the Mesa area.

Unlike the at-large seats, in which one homeowner gets one vote, the seats covering geographic districts or divisions have vote counts based on acreage. The more acres you own, the more votes you have. 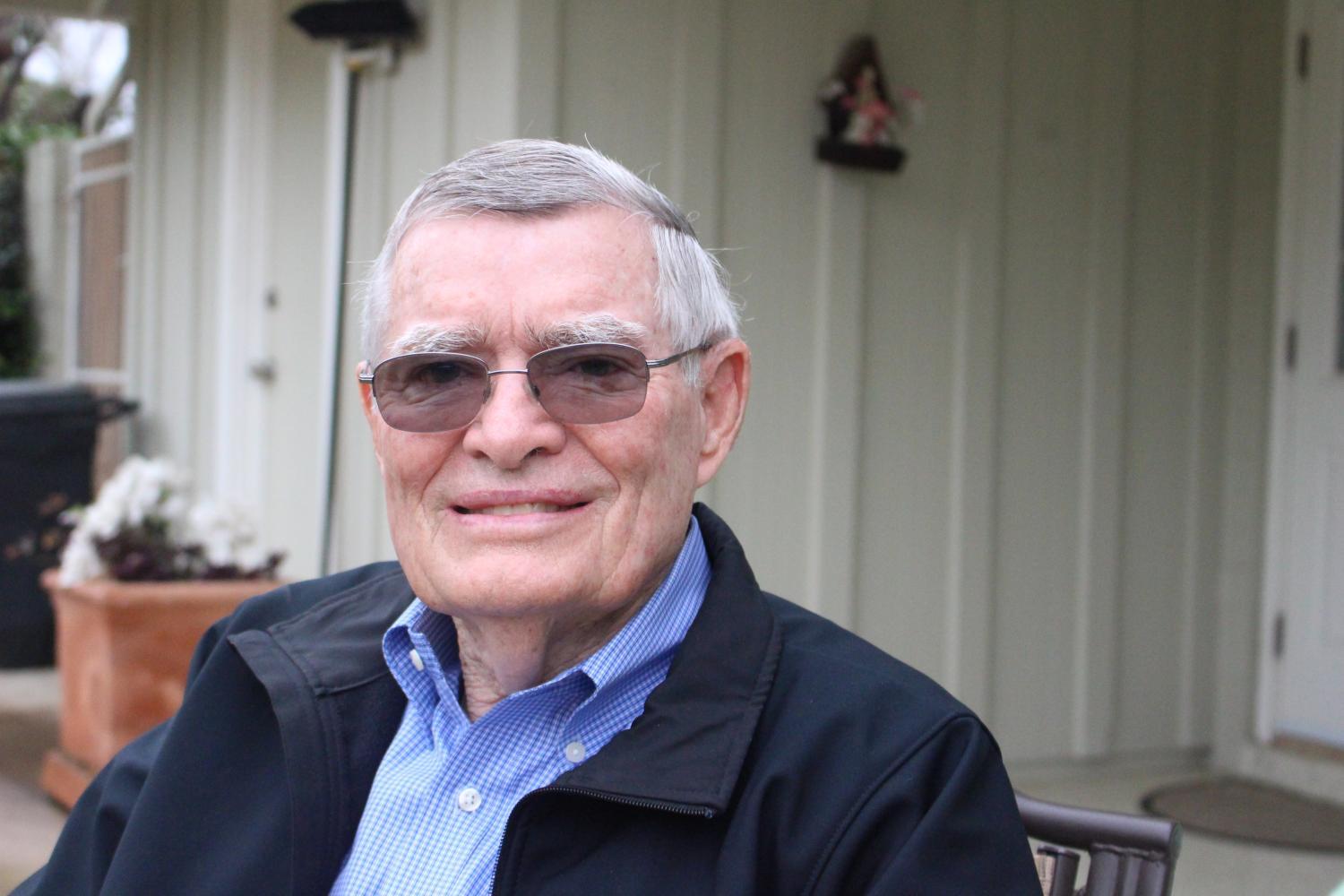 Bret Jaspers/KJZZ
Jack White has been on SRP’s board for 18 years.

Jack White has been on SRP’s board for 18 years, representing a district that includes many city of Phoenix homeowners. He isn’t up for re-election this cycle, and said having Miller, Hirt and other solar advocates on the board has been positive.

“The emphasis on solar has, I think, helped us move along,” he said.

But White, who was on SRP’s staff before retiring and running for the board, sees resiliency differently than Hirt does. He’s wary of the company being at the forefront of what could be a risky new technology like residential batteries. He is also adamant natural gas will be necessary to keep SRP’s service reliable.

“The four people that came on board, I think, better understand now than they did when they came on board ... that you have to serve your base load,” he said of the solar caucus. “You have to be there. And so basically that is what we are obligated to do and we will be doing that.”

People wanting to vote in the SRP election can see if they are eligible by going to SRP’s website.

The deadline to request an early ballot is Friday at 5 p.m. In-person voting at SRP’s administration building in Tempe is April 7th and will go on despite efforts to socially distance during the coronavirus outbreak.

In an email, SRP spokesman Scott Harelson said the utility is “statutorily obligated to hold the election on its designated date, so we are moving forward. That being said, we are taking measures to provide social distancing and safe space for those who might show up to vote in person.”

He added voters who request an early ballot can fill them out and then mail them back or drop them off at one of two locations.

The virus and resulting changes to daily life will likely make efforts to remind people to request a ballot even harder. The SRP elections are already lower-profile because they are run by the company and are not in conjunction with state and local government contests. They also come at a different time of year.

“Just convincing [voters] that there’s an election, that they really do need to request their ballot, it’s very difficult to get through the process,” Miller said.