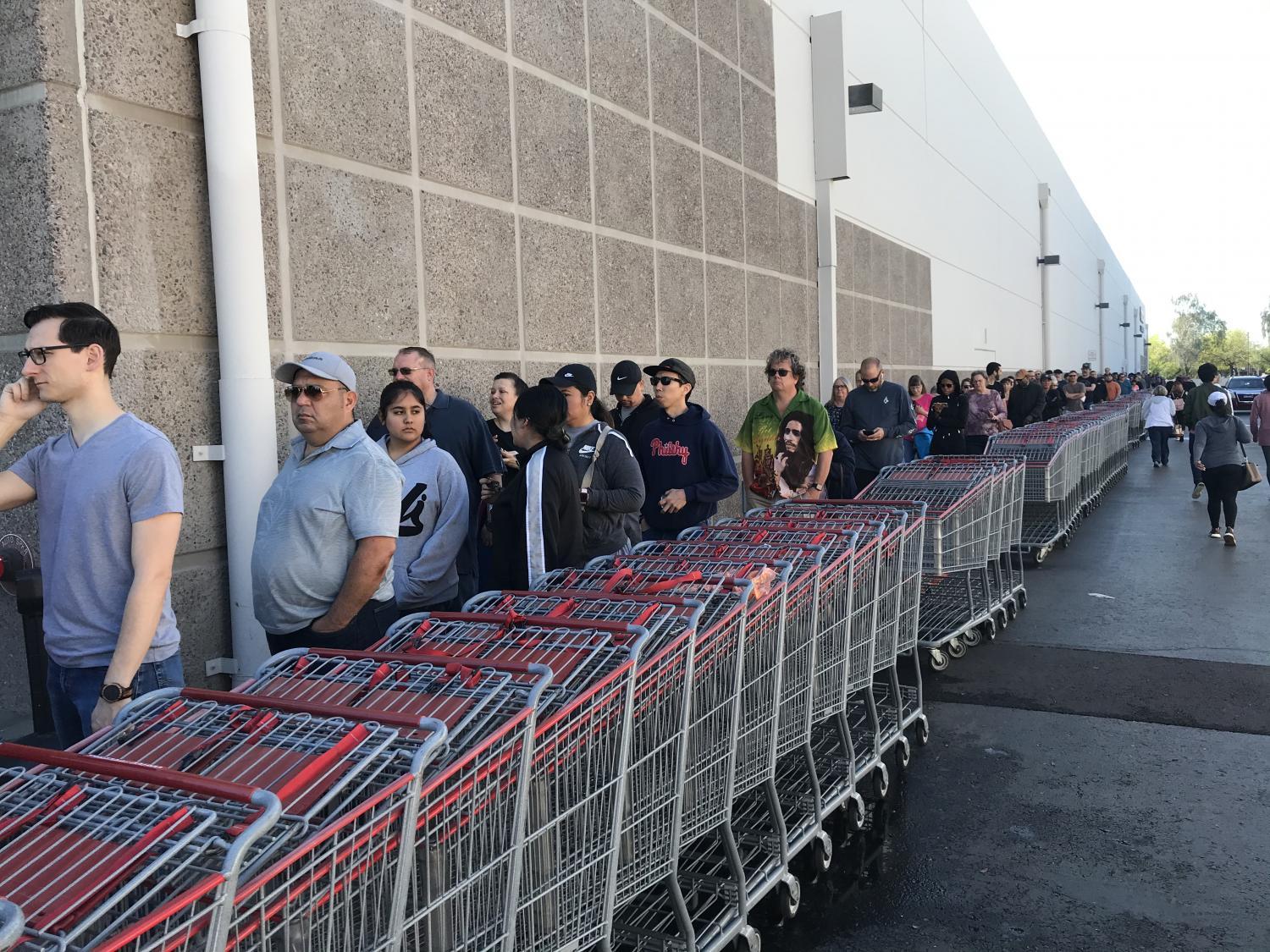 With the coronavirus pandemic breeding uncertainty, many U.S. businesses are struggling or shut down altogether. People are eschewing public gatherings, and employees are being sent home from offices, instructed to work from home.

It’s all part of a social-distancing strategy, meant to limit the spread of the highly contagious virus. But people are still gathering in large numbers at Phoenix-area stores, with lines stretching out the door as they attempt to stock up on supplies, preparing to remain home with their families for an unknown amount of time.

“I’ve been trying to find toilet paper for two weeks,” said Miguel Valdez of Tempe, who had finally secured some at a Costco early Saturday. “Because I work in the mornings, and everything in the afternoons is gone.”

He had arrived at Costco at 6:30 a.m. Saturday, three hours before the store opened.

“There were already about 20 people in front of me,” he said.

Valdez looked online for toilet paper, but he said major retailers were sold out. And on sites such as eBay and OfferUp, he said opportunistic sellers were asking upward of $40 for small packages of toilet paper.

Chad Snow/KJZZ
Miguel Valdez of Tempe works in the mornings and had been trying for about two weeks to buy toilet paper, but couldn't find any when shopping after work. He got some at Costco on March 14, 2020.

Valdez was among the first wave of shoppers exiting Costco on Saturday, and nearly every cart looked like his: brimming with bulk packages of toilet paper and other essentials.

Abelina Banda said she was not trying to add to the frenzy.

“Everybody’s just, like, going crazy, but I actually did need it,” the Guadalupe resident said. “I never stock up on anything. I actually needed water and toilet paper, but I also needed other things, so here I am.”

She arrived in the Costco line at 8:30, one hour before the store opened. But that was after she had already tried a nearby Sam’s Club, where she got in right after the doors opened at 7.

“As soon as I got there, they were out within 12 minutes,” she said. “The shelves were really empty.”

By 11:30 a.m., a representative confirmed that the Tempe Costco had also run out of toilet paper.

Banda wants to make sure her family —  five adults and three children all living under one roof — has everything they need. And finding those staples has been a challenge.

But she was shopping with a smile, and said she isn’t concerned about the coronavirus.

Chad Snow/KJZZ
Abelina Banda of Guadalupe loads her car up with supplies on March 14, 2020, at a Tempe Costco, at Elliot Road and Priest Drive.

EDITOR'S NOTE: This story has been updated to correct the spelling of Abelina Banda's name.