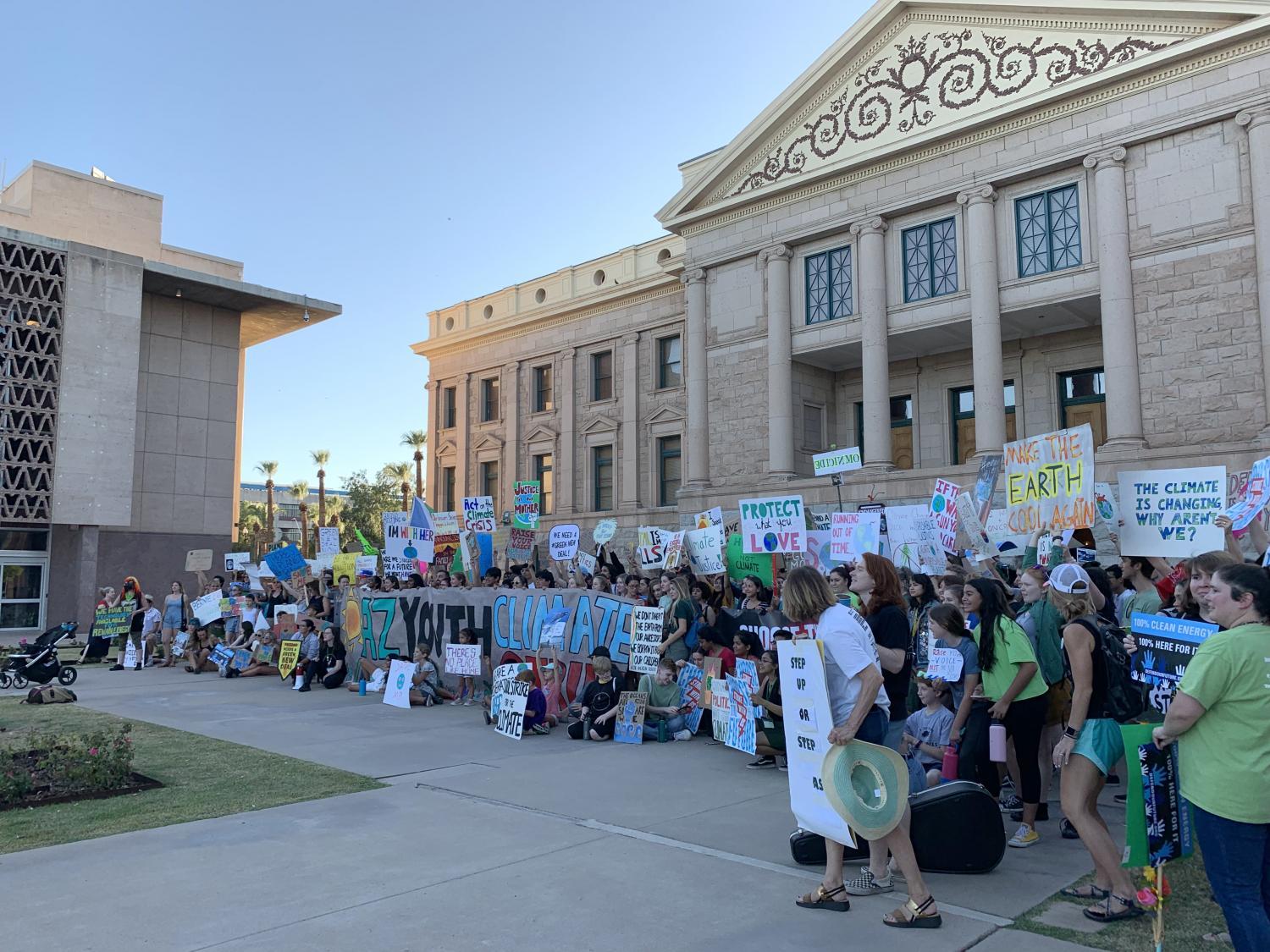 The GOP’s proposed Environmental Plan looks to make permanent tax breaks for companies that reduce emissions. The updated proposal is co-sponsored by a member of Arizona’s congressional delegation and comes at the same time that Arizonans call for new action on climate change.

Just last week, youth activists gathered in front of Phoenix City Hall demanding the city declare a climate emergency and set a deadline of 2030 for Phoenix to become carbon neutral.

Over the last nine months, climate change has been given more screen time nationally than ever before — thanks, in part, to the presidential election. National news networks peppered election coverage with “climate crisis” town halls and forums.

“This is not a middle of the ground thing,” he said. “This is not building a few more solar panels or a few more wind turbines,” said Sanders. “What this is about is transforming our energy system as quickly as we humanly can away from fossil fuels. It is insane that we continue to have fracking in America. It is absurd that we give tens of billions of dollars a year in tax breaks and subsidies to the fossil fuel industry. This has got to end and end now if we love our kids and future generations,” said Sanders.

“Our biggest challenges are smoke, dust, ozone,” said Misael Cabrera, director of the Arizona Department of Environmental Quality. He says 2024 is the year on his mind.

“We’re estimating an impact of $250 million per year on job creators and businesses,” he said.

2024 is a date set by the federal government. If the city doesn’t reduce ozone levels by that date, the air quality measure will be downgraded from “moderate” to “serious,” triggering new federal regulations on the city for development. Cabrera says for Phoenix, that translates to a financial impact of a quarter billion dollars per year.

“So we can maximize clean energy production at really affordable prices,” he said. His proposal is part of the U.S. House GOP Environmental Plan. In it, tax breaks already in effect will be made permanent for businesses that reduce carbon emissions and purchase upgraded equipment with technology able to capture carbon emissions from the atmosphere, “... embracing this technology and incentivizing it — I think now it has sort of entered everyone’s consciousness so it’s moving forward.”

He’s talking about direct air capture — a process of removing CO2 from the air, or as chemical engineering professor at MIT, Dr. Alan Hatton more often calls it, a method to atone for past transgressions.

“My concern with the legislation and that of my colleagues as well is that we’re just trying to punt the ball down the road a little. We’re putting up a bit of a smoke screen because by emphasizing direct air capture, you’re avoiding the real issues associated with fossil fuel emissions,” said Hatton.

“It’s a very expensive process, but I think if you get the right policies in place and the right carbon pricing etc., we should be able to justify the expenditure on doing this,” Hatton said.

Direct air capture is a process of capturing carbon dioxide, CO2, directly from the ambient air to re-use or bury deep into the ground. Hatton favors a process called "point of source" capture, where the business itself — microchip maker, aircraft parts manufacturer etc. captures emissions before they are released into the air.

“I think our future depends on it, at least our children’s future,” he said.

"I think our future depends on it, at least our children’s future."
— Dr. Alan Hatton

The problem for business, so far, has been the cost. Carbon capture, whether from the air or from the point of source is very expensive. Hatton says that’s because the fuel used to power the technology that removes emissions is expensive. But he says that is also changing.

“We think the costs can be quite low relative to some of the other costs associated with other processes,” Hatton said, referring to processes that use fossil fuels.“Fossil fuels are going to be around for a long time. There’s no denying that. And we need to find ways to mitigate the CO2 emissions from these fossil fuels.”

Hatton and a colleague have found a way to capture emissions and eliminate the CO2 using renewable energy sources — and doing that makes the process cheaper — up to 80% cheaper, according to initial estimates.

And that may make any tax-break focused legislation unnecessary, but the science takes time. Brian Baynes is co-founder of Verdox, a spin-off start-up company of Dr. Hatton’s lab.

“We need some way to capture that carbon or reverse those processes in order to slow climate change and Alan has been working on several different approaches to this in his laboratory,” Baynes said.

“The energy cost of capturing carbon has been the main limitation that’s kept it from being a scalable technology today. That’s why this problem still exists is that it just fundamentally takes too much energy with the conventional technologies to capture CO2 or capture carbon from the atmosphere,” he said, noting that legislation offering incentives or tax breaks is not enticing companies when the timeframes for developing and funding this technology are a lot longer.

“So if our policy decisions are being made on a timescale of two years or four years, changing and going back and forth, that’s just not really compatible with the time scale of one of these company’s lifetimes. We hope to avoid that entirely by trying to serve other markets that may not rely on policy,” he said.

Schweikert says the key, legislatively, is getting businesses to opt in, which also takes time.

“They would need a longer window, so we’ve actually updated the legislation to make it functionally permanent in the tax code,” said Schweikert. He says legislators have met with scientists and the corporations who back them about addressing corporate responsibility for the climate problem. He says the key for the legislation, like the technology, is to make it affordable.