Arizona Water Director: California Should Give Up More Water During Shortage 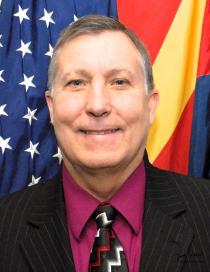 (Photo via azmc.org)
Thomas Buschatzke is director of the Arizona Department of Water Resources

(Photo courtesy of National Park Service)
Recently, Arizona has been leaving some of its water in Lake Mead, hoping to prevent a shortage.

Arizona’s water chief wants California to shoulder more of the burden of drought in the Lower Colorado River Basin. The comments came during a hearing in front of the U.S. Senate Committee On Energy and Natural Resources.

When it comes to the Colorado River, Arizona gets the short end of the stick. If the federal government declares a level-one shortage on the river, which is the least severe, the state will absorb 80 percent of the required cutbacks. Even if that ramps up to a level-two or level-three shortage and states give up more water, California will not lose a drop under the current agreement.

Against this backdrop, Thomas Buschatzke, director of the Arizona Department of Water Resources, called out Arizona’s neighbor.

“Honestly, the fact that California, under the 1968 Basin Project Act, does not take shortages, only Arizona and Nevada do, has created a bit of an unlevel playing field," Buschatzke told the Senate committee.

"We can use the help of the Department of Interior specifically on that issue: finding a way to create more equity at the negotiating table," he said.

Recently, Arizona has been leaving some of its water in Lake Mead, hoping to prevent a shortage. Buschatzke said, unfortunately, the current drought in California has reduced the state’s flexibility to take similar steps.