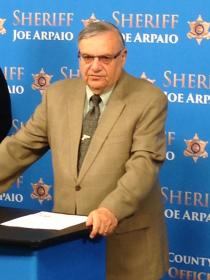 Maricopa County Sheriff Joe Arpaio and four members of his staff will not face a second round of civil contempt of court hearings later this month as originally planned. The judge has postponed the June hearing due to the sheriff’s motion asking the judge to recuse himself from the case.

Arpaio and four others were supposed to return to federal court for eight sessions between June 16 and June 26 to get to the bottom of how the sheriff's office violated U.S. District Court Judge Murray Snow’s orders in a long-standing racial profiling case.

Snow has threatened he may refer the contempt case to a federal prosecutor to pursue criminal contempt charges at the close of the civil hearing.

But last month, Arpaio and his chief deputy filed a motion asking Snow to step aside. They argued his impartiality was in question.

The motion essentially freezes all business in the contempt case until Snow issues his ruling on whether or not he will remain on the case.

Snow invited all the parties to weigh in on whether he should recuse himself. Two of the others facing contempt — Joseph Sousa and Brian Sands — notified the court they would not take a position, as did Maricopa County and members of the Maricopa County Attorney’s Office who formerly represented the sheriff.

The plaintiffs, however, are expected to argue for Judge Snow to stay on the case. They accused Arpaio of attempting to "derail" the contempt hearing by filing the motion for Snow to recuse.

Both sides proposed a briefing schedule in which the plaintiffs would file their brief on June 12 and lawyers for the sheriff and chief deputy would respond by June 22.

On Monday, Snow cancelled the June contempt hearing since the recusal matter would not be settled in time. The hearing is expected to be rescheduled

Meanwhile, Arpaio has gained additional legal help. The Maricopa County Attorney's Office expanded the contract of the law firm Jones, Skelton & Hochuli to also defend Arpaio in this racial profiling suit. The firm already defends the sheriff in a suit brought by the U.S. Department of Justice that accuses the Sheriff’s Office of discriminating against Latinos.

Arpaio’s long-time attorney, Tim Casey, withdrew from this racial profiling case last November citing Arizona rules that allow attorneys to withdraw from a case if representing a client would violate the Rules of Professional Conduct or other laws. Then at the start of the April contempt hearing, Tom Liddy and the other attorneys with the Maricopa County Attorney’s Office withdrew as well, citing a conflict of interest since Maricopa County had been named a defendant in the case.

Editor's Note: This article has been modified to reflect that Arpaio's outside counsel is retained by the Maricopa County Attorney's Office and that Maricopa County declined to weigh in on the recusal issue.

Now that the results from the so-called audit of Maricopa County’s election are in, some lawmakers are calling for changes to election processes. What those changes may look like.