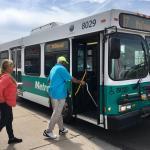 Christina Estes/KJZZ
Phoenix will determine where and how to add bus rapid transit service.

A city spokesperson said the corridors were named “to correlate with the street that they are predominantly along”. For example, the Camelback Road and 24th Street corridor runs mostly along Camelback Road with 24th Street being the next longest segment. See a map of the six potential corridors here.

This spring, public meetings and input will be gathered to narrow the options to three corridors. Groups interested in scheduling a BRT presentation can contact the city by email of calling 602-262-7242.

When Phoenix voters approved a transit tax in 2015, money was earmarked for bus rapid transit, along with light rail. The cost will be determined by the elements that will be ultimately approved by the City Council.

The project timeline calls for public engagement in early 2020 followed by operations and capital planning this summer. Preliminary corridor recommendations are expected to be announced this fall with conceptual design and implementation plans by the spring of 2021. When Phoenix voters approved a transit tax in 2015, money was earmarked for bus rapid transit, along with light rail.