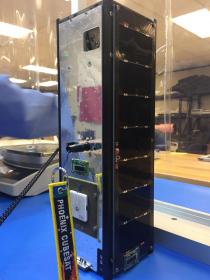 Sarah Rogers
The fully assembled 3U CubeSat, about the size of a loaf of bread. The image shows one of the spacecraft's two body-mounted solar panels on the right. The GPS antenna is pictured on the front, along with the CubeSat's "Remove Before Flight" (RBF) pin.

ASU rocketed the CubeSat to the ISS aboard a Northrop Grumman Antares rocket in November.

Known as Phoenix, the bread-loaf-sized craft will use an off-the-shelf infrared camera to study the urban heat island in seven U.S. cities, including Phoenix.

CubeSats conform to a modular design that lets them launch from a uniform chute or module.

About 100 undergraduate students worked on Phoenix, which will orbit the Earth for up to two years, enough time to capture data during all four seasons.

The team will make Phoenix's observations publicly available on its website phxcubesat.asu.edu.