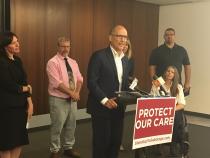 Democratic National Committee Chairman Tom Perez was in Phoenix on Monday for a roundtable discussion on Medicaid, Medicare and Social Security.

Perez spoke about pre-existing conditions, which he says can be a source of anxiety for people concerned about obtaining or maintaining health insurance. Perez says that anxiety is being heightened by President Donald Trump’s proposed budget, which would slash funding for Medicare and Medicaid.

"When you have diabetes or some other pre-existing condition, the Affordable Care Act put an end to your level of angst, because it said very clearly people with pre-existing conditions could keep their coverage," Perez said. "This president promised not to tinker with it, but he has done exactly that. He has broken his promise."

"The No. 1 issue is access to affordable, quality health care; 2.7 million Arizonans could lose their health care because they have pre-existing conditions, like diabetes, for example, or cancer," she said.

Perez also highlighted Arizona’s role as a likely battleground state in the upcoming elections, especially after the gains Democrats made in the state in 2018.

Perez said the Democratic National Committee would be investing a lot of time and money into the 2020 elections in Arizona.

"In 260 days, I'm confident that we will not only win the presidency here, but Arizona will be part of taking back the United States Senate," he said.