How can you live a frontier lifestyle long after the frontier has closed? In 2020, it involves solar panels, composting toilets, and rainwater harvesting.

Those are hallmarks of the “off-grid” lifestyle, which allows a homeowner to separate from the electric, water, and even food grid and provide for him or herself.

A growing number of residents of Cochise County are pursuing a life off-grid by building their own homes, generating their own power, and keeping their bills low. And the county’s building laws make this kind of life easier to lead.

Clay Greathouse is ready to put walls up for a home in the brushy valley off State Route 80, about 10 miles south of Tombstone. (“Trying to live up to my name,” he said.) He and his wife have dug trenches where they will erect walls, cutting through the cement-like rock caliche.

“It’s really porous and airy,” Greathouse said of the small black bits. “So, it’ll be like an insulated wall.”

The earth-filled bags act like batteries, slowly absorbing heat and then slowly losing it. Together, they allow for temperature control without additional electricity. When I visited, he was just waiting for a delivery of more bags.

Greathouse is also a realtor in Tombstone and talks to a lot of people considering going off-grid.

“People get afraid [because] it’s like, ‘well, how are we going to run the air conditioner and stuff?’” he said. But he tells them “the way to get around that is build a house that doesn’t need a lot of air conditioning.”

Pat Raynolds, a retired teacher, and her husband, Cees Arensman, bought their land a year and a half  ago.

“We spent three years just retired, traveling around in our motorhome, and we just got fat and lazy and bored,” she said. They helped a friend in Cochise County build her house, and one day realized they could do the same.

“So now, every morning we can choose what to work on, or not to work at all.”

They are starting with a practice house. It has a shower and a composting toilet (like Greathouse, they sleep in a trailer at the moment). Their property runs on solar power and well water, and they plan to harvest rainwater.

Bret Jaspers/KJZZ
This practice house has walls made of straw bales. Pat Raynolds and her husband, Cees Arensman, will use what they learn building it when they turn to building the bigger house.

Unlike Greathouse, however, they will build walls with straw bales. They stack and condense the bales, reinforce them with rebar, then cover them with clay.

Ray Korleski has a finished house, acquired for free from a title company who owned the nearby property where it sat vacant. His bountiful plants and decorative flourishes indicate he’s lived on his property longer than Clay or Pat — seven years, in fact. Korleski is retired from both the Air Force and the Cochise County Sheriff’s Office.

A 5,000 gallon black tank for collecting rainwater sits prominently off to the side. He proudly taps the top, and the lack of an echo proves the tank is full after a rainy year.

Here’s how he harvests rainwater: the house is lined with gutters. The initial runoff from the roof fills one pipe first to collect the dirt. Only when that fills up does the rainwater then run into the tank.

“I also have a screen where it goes into the tank, you know, to keep any [other] debris from going into the tank,” he said. “If the roof is 1,000 square feet, you’ll get 600 gallons of water in one inch of rain.”

There are many different ways to build your own home, and many different motivations. Sustainability is one, but cost and independence are also major drivers for Clay Greathouse, Pat Raynolds, and Ray Korleski.

And county building law gives them a boost.

Owner-builders in Cochise County who own at least 4 acres have an option that dramatically reduces their fees and oversight: they don’t have to get their construction plans reviewed or their houses inspected, even though they sign an affidavit promising to follow building codes.

This so-called “opt-out” permit costs $157. A mandatory septic system permit is $235. There is also a floodplain permit of $150. The total amount is much less than the few thousands of dollars a full home inspection might cost. Those fees are set according to the size and value of the house.

“Twenty-thousand dollars, all the sudden you’ve got a roof over your head, a place of your own,” he said. “You’ve got the dignity of owning your own place.” 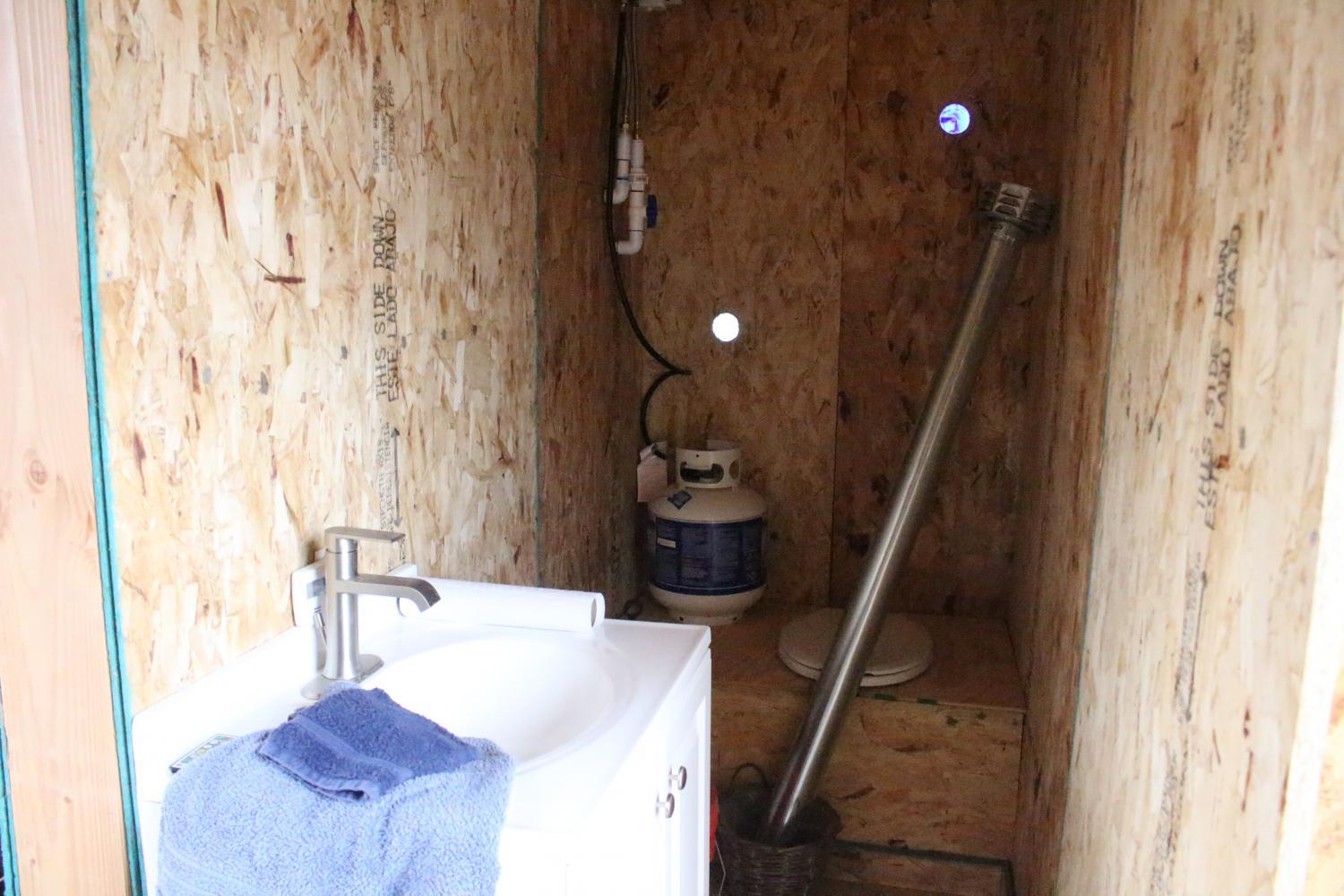 Bret Jaspers/KJZZ
In the corner of their practice house is a composting toilet. Glass circles add light and a decorative touch.

Opting-out of inspections, however, makes it harder to insure a house or sell it later on. A potential buyer would not know all the nitty gritty details.

“Once you cover up the walls, you don’t know if headers are put in correctly, if it’s been wired correctly. Are gas lines put in correctly?” asked Dan Coxworth, director of Cochise County development services. “From a safety perspective, we do have concerns.”

Coxworth was quick to add that his department couldn’t point to examples of fires or deaths as a result of opt-out homes.

Another downside, the department says, is the existence of the opt-out permit could affect homeowner insurance rates for all county-dwellers because the community will get a lower “grade” from a certain insurance rating program.

The Cochise County Board of Supervisors recently held a work session on opting-out. (Page four of this presentation shows all the eligible land for owner-builder permits, in pink). The supervisors asked the development department to find other permit options to answer safety concerns, without endorsing a repeal of the opt-out permit.

At the work session, the department said 113 of 413 single family homes built in Cochise County between 2015 and 2018 chose the owner-builder “opt-out” option, about 27%.

In the meantime, off-gridders rely on a growing community — which includes multiple DIY YouTube channels produced in Cochise County — to help them build their homesteads.

“I think a lot of people see that as the new frontier. And also the allure of self-sustainability,” Korleski said. “To be able to do the things that they want to do themselves, and feel like ‘I have control over my future. If something goes bad, I can do it myself.’”

For Pat Raynolds, the upside outweighs any downside.

“When we’re digging trenches and pouring concrete, and I’m in my 60s, I’m thinking, you know, ‘This is the stupidest thing you’ve ever done!’” she said. “But then [the] next day, I’m so happy I’m here.”