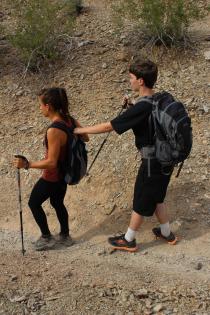 Each week, a group of blind and visually impaired kids get together to tackle one of the many hiking trails in metro Phoenix.

It's part of a training program they're involved with to prepare for a longer hike in the Grand Canyon this June. But they're training for more than just bragging rights. Group leaders say the boost in self esteem the kids gain can have wide ranging impacts.

They meet every Wednesday and one Saturday a month. This week, the group has organized at North Mountain Park, preparing for a 5-mile trip up the Shaw Butte trail.

These trips are organized by the Foundation for Blind Children in Phoenix. The four kids on today’s hike have different kinds of visual impairments. One is blind, others have what’s known as tunnel vision, and some have just peripheral vision.

However, none of those things kept them from keeping a brisk pace on the way to the summit.

"Alright we’re kind of getting rocky here, and we’re going to move over to our left," said Tatiana Stieve, an adult volunteer with the foundation. She’s walking with 13 year-old Andrew Graham, acting as his guide.

Graham is completely blind. He’s navigating the trail by holding onto a strap on Stieve’s backpack and listening to her describe the terrain ahead.

"Alright, up one step. Up one then two," she said.

Once the kids reach the summit, they stop to fuel up on water and a few snacks. Twelve year-old Roman Robago reflects on his experience with the group, which have been meeting regularly since January.

"I like to come to meet new people that come here and to have fun with my friends," he said.

For Graham, he said he’s found a sense of community through the experience.

"Just the fact that I’m getting up, getting ready, and going," said Graham.

"It’s been absolutely amazing to see the transformation of nearly almost very one of these kids," said Alexander Pushman, the director of marketing at FBC.

He said the trip to the Grand Canyon this June is the fifth major excursion the foundation has organized.

"The whole goal is to get these kids out and have them set a goal and obtain that goal," said Pushman. "An adventure like this, it’s kind of one of those things where we’re pushing the barrier of what they might think they’re capable of."

This mentality can help give people the feeling that they have control over their destiny, said Joe Strechay with the American Foundation for the Blind.

Back at North Mountain, the hikers are rounding off the last corner of the trail — and spirits are just as high as when they started.

The group has one more practice hike before heading to the Grand Canyon next month.