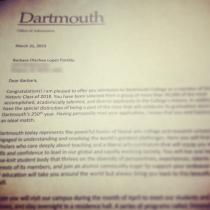 It's graduation time around the country. Here in Arizona, a lot of those graduations are happening this week. In her own words, here is the story of an Alhambra High School senior from KJZZ's Spot 127 Youth Media Center in Maryvale who is getting ready to go to college.

My name is Barbara Olachea. I am 18 years old, and I live in Phoenix.

I come from two cultures. First and foremost I am Latina, born in Mexicali, Baja California. My parents brought me to the U.S. at the age of 5 so I could have a better life than they did. I am a DREAMer. I absorbed a new language and culture.

America is where I experienced my childhood and adolescence, where I developed my identity. I haven’t returned to my native land since I came to the U.S., but as my parents often remind me, it’s crucial to stay in touch with my Mexican roots.

Freshmen year I met with a mentor who helped me estimate how much scholarship money I might be able to get. She asked, “Are you a United States resident?” I shook my head, expecting that look of sympathy I usually get.

Instead, she pulled out a list of resources for children of immigrants.

“You’re going to have to try harder than everybody else,” she said. Those words confirmed what I had known all along.

Although I was only starting high school, I began to dread what most students anticipate with excitement: graduation day. What if I got into my dream school, but I still couldn’t go because I couldn’t afford it?

I didn’t want to be in the same situation my sister was six years ago — accepted to Arizona State University but with almost no scholarship money.

There were plenty of good schools outside of Arizona, but they were financially beyond my reach, until I realized that some might offer me funding. Even though I had good grades, I worried that I still wasn’t good enough, that I wouldn’t measure up against other students.

Entering my senior year, I began researching universities. Despite my doubts, I applied to a lengthy list of schools: Columbia, Brown, Northwestern, all schools with low acceptance rates.

Months passed and the decisions began rolling in. After the first few rejections, I figured if I hadn't been accepted to one Ivy League school, I hadn't gotten into any.

It was to my great surprise when I received an email from the alumni who had interviewed me for Dartmouth. To my disbelief, the word “congratulations” was among the mass of words on the computer screen.

I have been accepted to Dartmouth on a full ride scholarship. Dartmouth, where Meryl Streep, Mindy Kaling and Robert Frost went to school.

The daughter of immigrant parents from Mexico, a mom and dad who worked, saved, and taught me well. The daughter of Mexico and of America, shaped into who I am by my hardships but blessed by my opportunities. I wouldn't have it any other way.